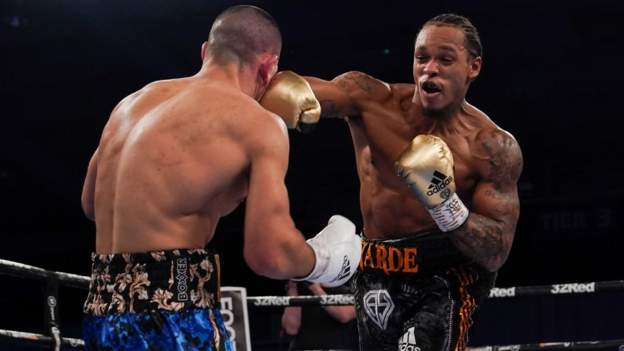 Yarde, 31, made short work of the previously unbeaten Koykov, knocking him down with a short uppercut to finish the fight.

The win assures Yarde a crack at the WBC, IBF and WBO world titles which are held by the undefeated Beterbiev.

Yarde fights Beterbiev on 28 January at the OVO Arena in London.

“It wasn’t flawless, I don’t think flawless is possible but that’s what we strive for,” Yarde said after the fight.

“I’ve got so much confidence going into this next fight.”

Yarde peppered Koykov with shots in a strong opening round and went to the body in the second, drilling shots into the ribs of his opponent whenever the opportunity presented itself.

With little coming back from Koykov, Yarde put his foot on the gas in the third round. He hurt Koykov with a right hand to the body and a left hook to the head.

Koykov retreated to the ropes only for Yarde to hit him with two left hooks before a sharp, quick uppercut put the Bulgarian down.

The win extends Yarde’s unbeaten streak to three after bouncing back from defeat to domestic rival Lydon Arthur in their rematch in late 2020.

Yarde also returned from an 11-month lay-off and now has an impressive 22 knockouts in 23 wins.

The fight against Beterbiev will be Yarde’s second attempt at becoming a world champion after losing to then WBO champion Sergey Kovalev in Russia in 2019.

Kovalev stopped Yarde in the eleventh round after a spirited display from the East London fighter.

This time Yarde will have home comforts as Beterbiev has agreed to travel to England to defend his three titles for the first time.

Beterbiev, 37, added the WBO title to his collection in June when he stopped American Joe Smith Jr in two rounds.

“I never back down from a challenge, and Anthony Yarde is a top contender who asked for this fight. I look forward to fighting in London for the first time since the Olympics,” Beterbiev said.

“Yarde called me ‘slow’ after my fight with Joe Smith Jr, but slow and steady wins the race.”

The Russian is unbeaten in 18 fights with a perfect knockout record as one of boxing’s most feared finishers.