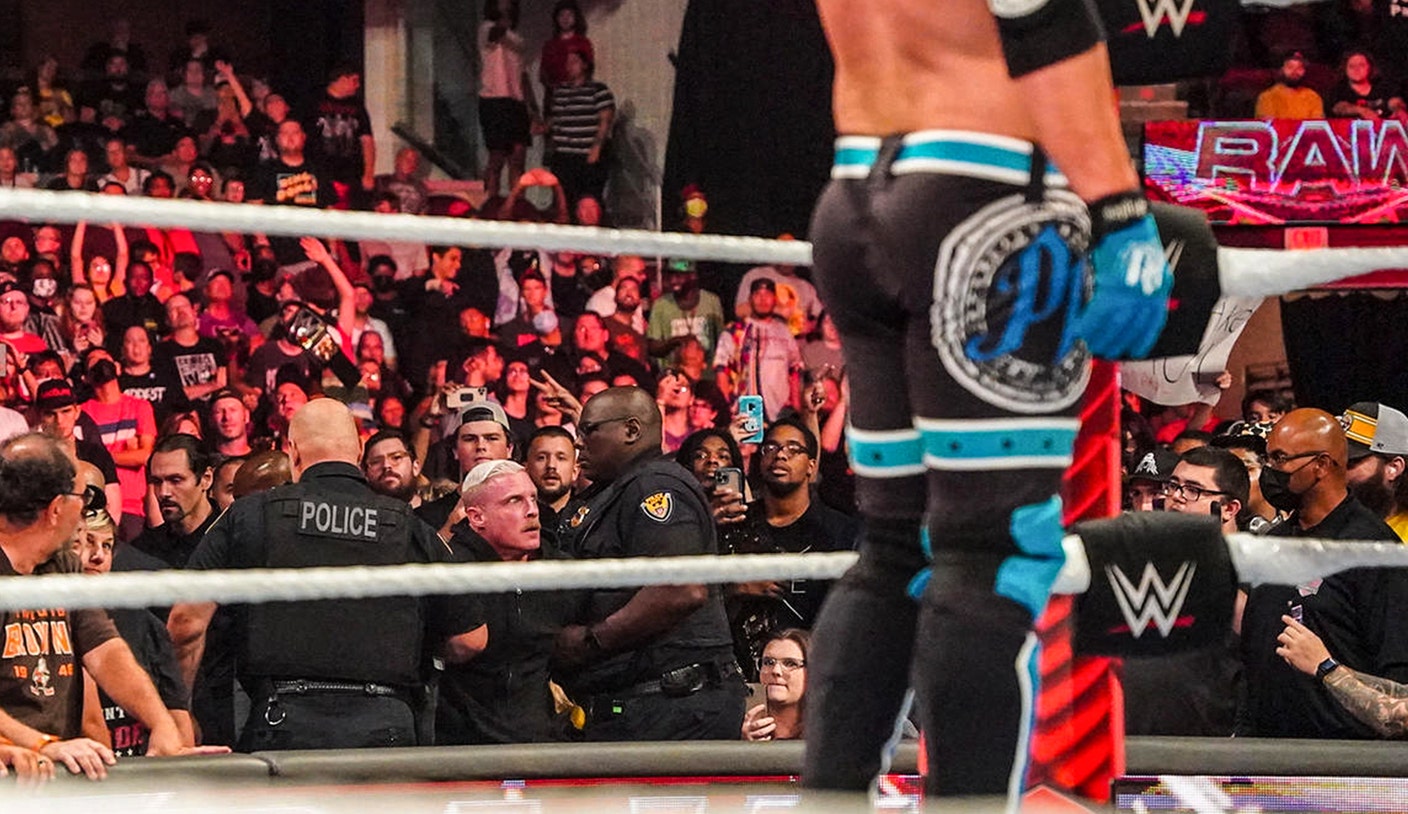 Former NXT wrestler Dexter Lumis returned to WWE this week on Raw, but in a way you wouldn’t have expected.

First, here’s a recap of the match results:

Dakota Kai and IYO SKY faced off against Tamina and Dana Brooke in Round 1 of the Women’s Tag Titles Tournament on Monday Night Raw.

Moment of the night: Dexter Lumis debut plays out in the background

This started in the background of a promo when Doudrop and Nikki A.S.H. were seen beside a crashed car.

The shot appeared unintentional at first, but the next time the car was seen, it was being loaded onto a tow truck (once again in the background of an interview). Security surrounding the car then got a tip about something and all rushed away in pursuit.

This led to the conclusion of the main event where security tackled someone in the crowd who turned out to be Lumis.

Rewarding the viewer for paying attention to background happenings isn’t a typical WWE move. Triple H, however, has proven in the past to enjoy messing with various production tropes to enhance his shows.

For example, there were a few times during NXT TakeOver where he’d put up the end of show logo to indicate it was over — then something big would happen afterward to make the surprise even better.

Seeing him introduce Lumis in the background throughout multiple segments had similar vibes.

It also made viewers want to tune in next week for more of the story. That’s what Raw needs more of.

Kevin Owens destroyed Ezekiel in the ring, then cut a killer promo afterward on once again proving Raw is the KO show.

Under Triple H’s leadership in NXT, Owens was a beast.

The possibility of seeing a version of that character again on Raw has fans salivating at the potential.

This was a great start to getting there.

Here are the full brackets for the Women’s Tag Team title tournament.

One notable entry is Nikkita Lyons and Zoey Stark from NXT. It’ll be interesting to see how they fare in their main roster debuts.

Ciampa had a chance to earn gold on Monday Night Raw when he went up against The All Mighty Bobby Lashley for the United States Title.

Lashley may have defeated Ciampa to retain the United States Championship, but they both gained from the match.

Ciampa standing toe-to-toe with a former world champ, and even getting a few nearfalls on him, made him appear to be a tough competitor.

This will help him in the long run more than what he was doing before.

As for Lashley, he was shown busting out new offense and asserting his dominance as the top champion on the show.

If the plan is to elevate the importance of the United States Championship on Raw, this did a good job of accomplishing that.

For a segment-by-segment breakdown of the show, listen to the SmackDown Roundup podcast in the “Out of Character” feed on Apple Podcasts or Spotify.

Don’t forget to follow all your favorite WWE Superstars and shows in the FOX Sports app to receive alerts on what they’re doing and more!

Get more from World Wrestling Entertainment Follow your favorites to get information about games, news and more.