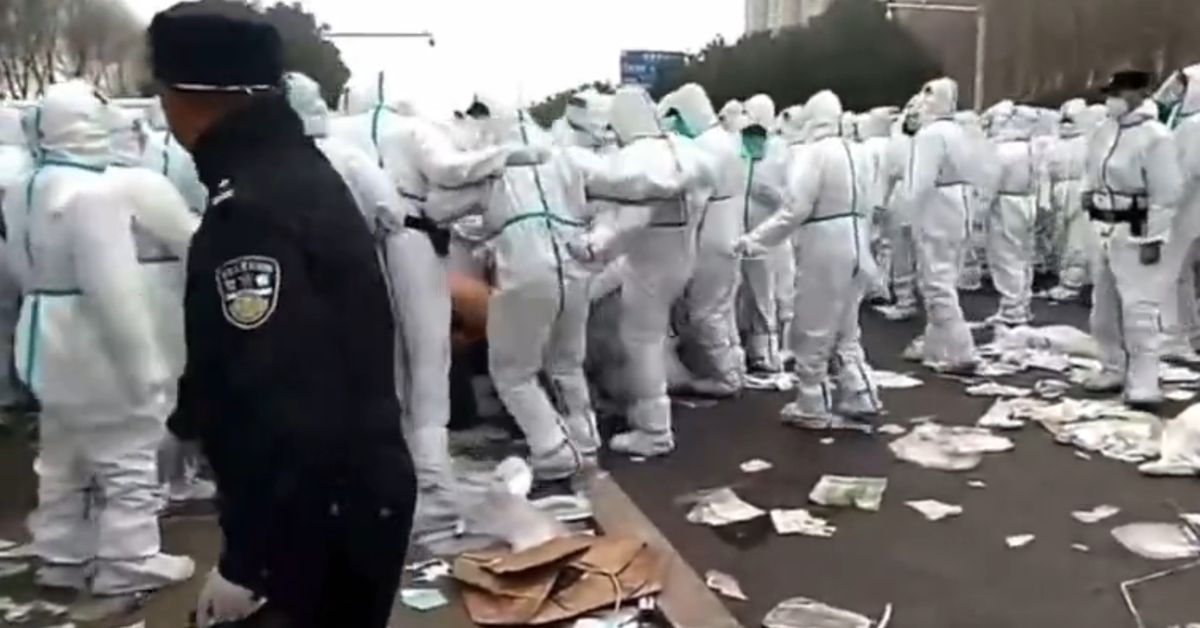 Protests have broken out at Foxconn’s vast iPhone factory in Zhengzhou, central China, as footage circulating on social media shows workers clashing with baton-wielding riot police and hazmat-suited officials. The protests started after workers, who have been under strict covid lockdown for weeks, learned bonus payments would be delayed, reports The Wall Street Journal.

The Wall Street Journal reports that protests started on Tuesday evening near Foxconn employee accommodations at the Zhengzhou facility. Foxconn’s strict covid controls have reportedly isolated its employees, forcing them to live and work on-site (with limited food and supplies) in order to prevent further outbreaks in Zhengzhou. Since October, many workers have escaped from the locked-down facility, leading Foxconn to promise incentives like higher salaries and bonuses to retain staff.

Video footage captured on Wednesday shows hundreds of workers protesting at the campus, chanting “give us our pay” while surrounded by riot police and people in hazmat suits. Livestream footage later that night saw protests escalating, with workers chanting “Defend our rights! Defend our rights!” as they confronted police officers, according to the Agence France-Presse news agency. “Foxconn never treats humans as humans,” said another person in a social media video at the scene.

Other workers captured on live streams said they were protesting over food shortages in addition to the delayed payments. “They changed the contract so that we could not get the subsidy as they had promised. They quarantine us but don’t provide food,” said one Foxconn worker during a live stream as reported by the BBC. “If they do not address our needs, we will keep fighting.”

Most of the video footage has already been removed but The Wall Street Journal reports it has corroborated events shown in the videos with workers at the site. The hashtag “Foxconn Riots” was also seemingly censored on the Chinese social media platform Weibo by Wednesday night.

News Next Desk - December 8, 2022 0
The 2022 NFL regular season is nearing the homestretch. With that in mind, Colin Cowherd's "Herd Hierarchy" is beginning to solidify...

News Next Desk - December 8, 2022 0
Price: $70Tech specs or features: Multiple light colors | 11 white noise sounds | Alexa compatibleIt may not be a toy, but parents swear by this sleep machine...

News Next Desk - December 8, 2022 0
The European Commission on Wednesday (December 7) proposed a ninth package of sanction on Russia. The sanctions proposed due to Russia's invasion of Ukraine...

College football transfer portal: Who will make the biggest impact?

News Next Desk - December 8, 2022 0
Monday marked the first day of the newly-formed NCAA transfer window, and over 700 college football players entered their name into...

College football transfers who will have the biggest impact

News Next Desk - December 8, 2022 0
Monday marked the first day of the newly-formed NCAA transfer window, and over 700 college football players entered their name into...

Mike Vrabel has more power than ever with the Titans. It...

News Next Desk - December 8, 2022 0
Ben Arthur AFC South Reporter After the firing of general manager Jon Robinson, one of the most seismic moves in...
%d bloggers like this: