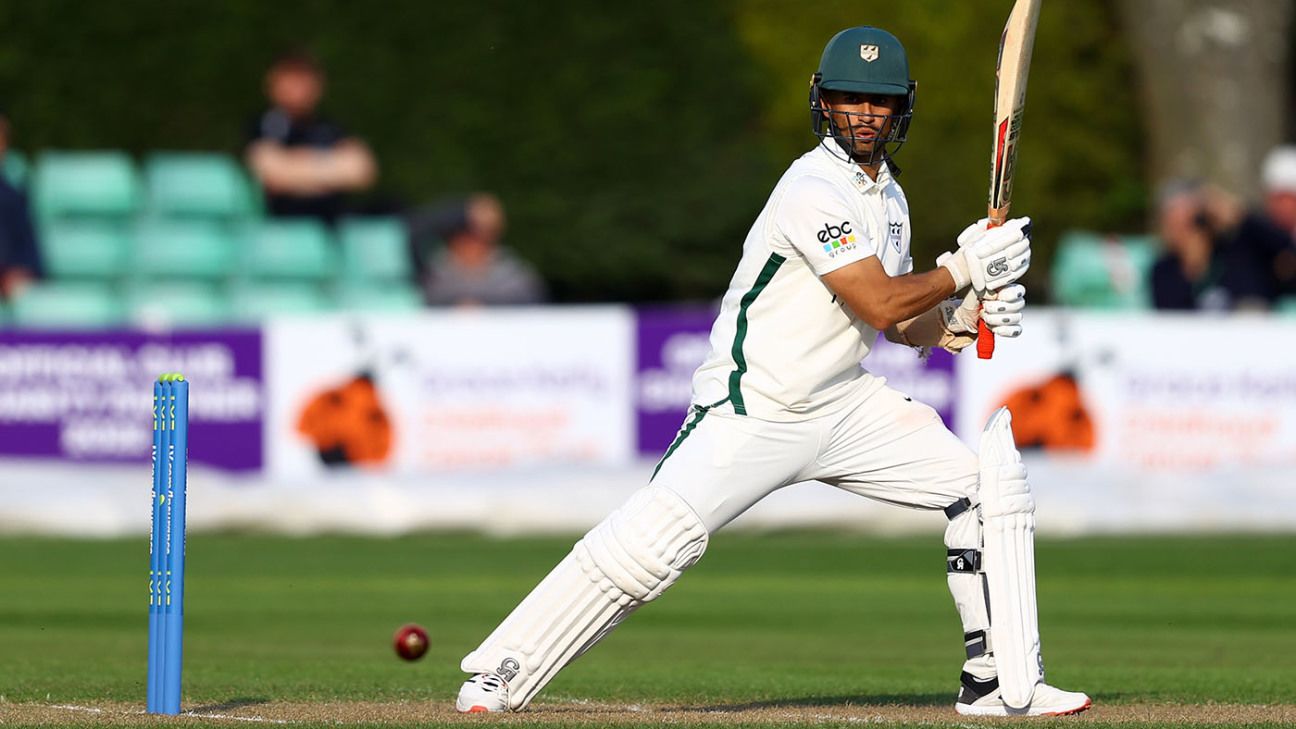 Worcestershire club captain Brett D’Oliveira continued his prolific start to the 2022 campaign with an unbeaten 169 on day two of the LV=Insurance County Championship match with Sussex at New Road. His predecessor as captain, Joe Leach, then picked up three wickets in seven balls late in the day to put Worcestershire in control as the visitors, despite an unbeaten 85 from Cheteswar Pujara, closed on 169 for 5.

Allrounder D’Oliveira batted for seven-and-three-quarter hours in total and was the bedrock of his side’s 491 all out spanning 136.5 overs. It means D’Oliveira is still to be dismissed this summer and three innings have yielded a total of 294 runs.

Leach then caused havoc late in the day with the wickets of Tom Clark, Mohammad Rizwan and Jamie Atkins in an inspired spell to leave Sussex still 322 in arrears.

D’Oliveira began today on 106 not out and continued in untroubled fashion in helping his team secure four batting points. He followed in the footsteps of grandfather Basil (1967 and 1968) and his father, Damian (1985) in scoring first-class centuries against Sussex.

For injury-hit Sussex, it was another chastening experience in the field after conceding scores of 534 for 9 declared and 505 for 8 declared against Nottinghamshire and Derbyshire in their opening two games. To add to their woes, batter, Tom Alsop, suffered a severely bruised finger when fielding and was unable to take his place at No. 3 in the order.

After two losing two early wickets, Pujara, a double century-maker against Derby, and Clark gave them something to smile about on a bitterly cold day but then Leach altered the picture.

D’Oliveira was given excellent support with the bat by Leach and Josh Baker when Worcestershire began the day on 338 for 5. There was an encouraging sign for later in the match for the Worcestershire bowlers in the first over of the day when a delivery from Grant Stewart reared up off a length and struck D’Oliveira on the hand.

Ben Cox, on 29, pushed forward and was caught behind off Stewart but Leach, was quickly onto the offensive. The allrounder had made 26 off only 24 balls when he lofted Clark into the hands of mid-off. Baker also looked to score quickly and his eighth-wicket partnership with D’Oliveira added 85 before was he was caught at cover off Delray Rawlins for 43 to the last ball before lunch.

D’Olvieira went into the interval unbeaten on 149 and brought up his 150 with the first ball after the resumption. He then showed his versatility in scooping Henry Crocombe over the keeper for four.

The innings was wrapped up by Crocombe with Charlie Morris caught behind off a lifting delivery and Dillon Pennington top-edging straight to mid-on.

Leach then made the perfect start when Sussex launched their reply in dismissing Ali Orr with his first delivery. Orr pushed forward to a delivery angled in and was comprehensively bowled.

Leach’s new ball partner, Morris, also struck a crucial blow to dismiss Sussex captain Tom Haines, the leading first class run-scorer in the country last season. Haines, on 26, pushed out and was bowled by a delivery which went past his inside edge.

Pujara played some attractive strokes but was fortunate on 31 when he inside-edged a delivery Ed Barnard past the stumps for four. But he and Clark grew in confidence and were posed fewer problems as the day progressed. It needed Leach to end a partnership of 119 with Jack Haynes producing a superb low catch at second slip to account for Clark on 44 and it became two wickets in two balls when Rizwan was caught behind.

Leach broke through again when he bowled Atkins with a ball of full length and he closed with 4 for 56.

News Next Desk - October 4, 2022 0
The developer behind open-source free video editor and player VLC has issued a legal notice to two Indian ministries after the country’s Department of...
%d bloggers like this: