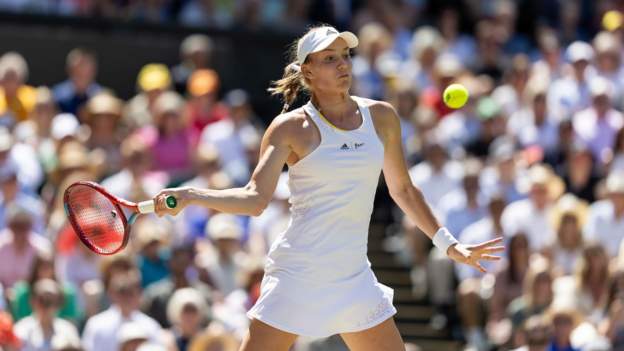 Female competitors at Wimbledon will be allowed to wear dark-coloured undershorts from next year.

The All England Club has relaxed its all-white clothing rule to relieve a “potential source of anxiety” for players on their period.

Women and girls can now wear mid- or dark-coloured undershorts, provided they are no longer than their skirt.

Former Olympic champion Monica Puig previously spoke out the “mental stress” of having to wear white.

The Puerto Rican, who won her Olympic title in 2016, also said she used to pray the championships did not coincide with her period.

Britain’s Heather Watson, who was one of the first to speak about the impact periods can have on performance, said the issue was frequently discussed privately.

“It is absolutely something the players talk about around Wimbledon because of the all-whites,” Watson told BBC Sport in June.

“I think people speak about it a lot – maybe not to the media but among ourselves, for sure.”

Sally Bolton, the All England Club’s chief executive, said: “We are committed to supporting the players and listening to their feedback as to how they can perform at their best.

“It is our hope that this rule adjustment will help players focus purely on their performance by relieving a potential source of anxiety.”

The move comes after Stoke City, West Bromwich Albion, Swansea and Manchester City all introduced dark coloured shorts for their women’s teams, while Bristol City will wear red shorts with their home kit for the first time when they play Birmingham at Ashton Gate on Saturday.

Test cricketers have also spoken about the anxiety of bleeding in their whites while playing.

The All England Club has also announced the 2022 Championships recorded a surplus of £47.141m- the second highest on record. Ninety percent of that surplus (£42.427m) will be distributed to the LTA to invest in British tennis.

The public ticket ballot for next year’s Championships has just closed, and the Club says it has received a record number of entries. It reports “renewed strong levels of interest from overseas” – and especially from the US, Ireland, Italy and Germany.

That will come as a relief, as even though this year’s tournament was the most attended in Wimbledon history (due to the introduction of play on the middle Sunday), the All England Club said the number of people joining the queue had fallen. One of the theories put forward at the time was the difficulty of travelling from overseas during a pandemic.

Meanwhile, former British number one Laura Robson and Jamie Delgado, who played at Wimbledon for a record 23 consecutive years, will join the Club in December, focusing on international player relations.

They will have a remit to travel to overseas tournaments to “foster collaboration and engagement with the tennis community”.

Their diplomatic skills will be sorely needed as the Club tries to repair relationships damaged by the decision to ban Russian and Belarusian players from this year’s championships.

Chadwick Boseman portrait to be auctioned for a humanitarian cause

News Next Desk - December 6, 2022 0
A 139-run sixth-wicket stand between Shahadat Hossain and Jaker Ali rescued Bangladesh A from getting bowled out for a small total. Shahadat top scored...

Chadwick Boseman portrait to be auctioned for a humanitarian cause

News Next Desk - December 6, 2022 0
‘Black Panther’ star Chadwick Boseman’s portrait will head to Project Angel Food’s ANgelPhoto auction this year. This is regarding a photo shot by Kwaku...

News Next Desk - December 6, 2022 0
The Reserve Bank of India-led rate-setting panel is likely to break the 50-basis-point-hike trend in its last policy review of the calendar year and...
%d bloggers like this: