Home World What is the MQM, the last big ally to leave Imran Khan:... 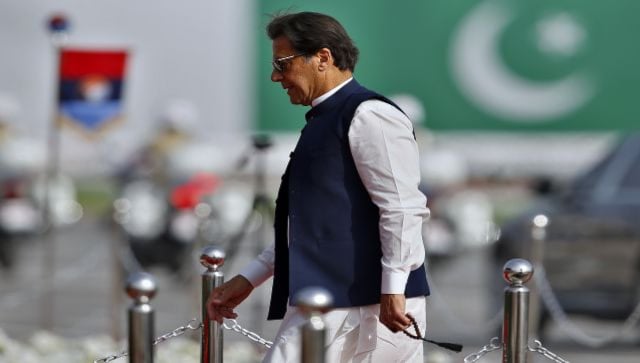 Pakistan prime minister Imran Khan is trying his hardest to hang on to power. AP

The Muttahida Qaumi Movement-Pakistan (MQM-P) on Wednesday all but assured the fall of the Imran Khan-led Pakistan Tehreek-e-Insaaf (PTI) government as it signed an agreement with other opposition parties to support the no-confidence motion against the prime minister.

After overnight talks with top leaders of the joint opposition of the Pakistan Muslim League (Nawaz), Pakistan People’s Party, and Jamiat Ulema Islami (F), the partywithdrew the support of its seven members from the PTI government.

Let’s take a look back at the party that has time and again helped governments to form and what is its India connection:

Who are the MQM and their connection with India

Founded by student leader Altaf Hussain in Karachi University in 1978 as All Pakistan Mohajir Student Organisation {APMSO}, it was the first political party of muhajirs.

Mohajir is a term used in Pakistan for Urdu-speaking Muslims who moved from India to the new country upon partition.

The inspiration behind the APMSO was to highlight the marginalisation of the Mohajirs from Pakistan’s national life after the first few years of independence.

In the mid-80s, the APMSO launched the MQM. In its claim to represent the Mohajirs, the party presented itself against Sindhi elites and the Pashtun population of Karachi.

It claimed to represent the Mohajir community which perceived itself as the victim of discrimination and repression by the quota system that gave preference to certain ethnicities for admissions in educational institutions and employment in civil services.

In its early demands, the party wanted Karachi to be carved out of Sindh into a Mohajir province.

According to the Indian Express, due to its independent-minded leadership, and the party’s popularity among Karachi’s Urdu-speaking middle class and youth, the MQM was accused of conspiring to break Karachi away from Pakistan at the behest of India’s intelligence agency.

Also read: Stepping out of Nawaz Sharif’s shadow: All you need to know about Shehbaz Sharif, tipped to be next Pakistan prime minister

The PPP and MQM fought each other on the streets of Karachi. Through the 1990s, the MQM was targeted by the military, leading to violent crackdowns and bloodbaths.

The support of the Urdu speakers of Pakistan helped the MQM become the third-largest party in Pakistan in the 1990 election, and it continued in this position until 2013.

In a bid to grow out of its ethnic image and present itself at a larger, national stage, the MQM replaced “Mohajir” in its name with “Muttahida” (united).

The party enjoyed its most glorious phase from 1999 to 2008, when General Pervez Musharraf, who was a Mohajir himself, was in power. The party was being controlled by its founder and long-time chief Altaf Hussain from London.

The fall of MQM

The murder of Imran Farooq, a senior party leader, outside his home in London led British authorities to snoop around Hussain’s home and office, where they found a huge stash of currency. An investigation into money laundering charges was initiated.

It was at this time that a BBC report alleged Hussain’s links with Indian intelligence agency R&AW.

“UK authorities investigating the MQM for alleged money laundering also found a list of weapons in an MQM property. A Pakistani official has told the BBC that India has trained hundreds of MQM militants over the past 10 years,” the BBC report read.

The Indian authorities, however, described the claims as “completely baseless”.

According to the Indian Express, a speech by Hussain to followers in Karachi led to large scale violence in 2016, after which the British authorities pressed terrorism charges against Hussain.

He was acquitted in February this year.

Meanwhile, the party at home was divided into many factions.

During the 2018 elections, a breakaway faction of the MQM called Pakistan Sarzameen Party put up its own candidate, while the MQM, which now called itself MQM-P, won just seven seats, an all-time low.

Despite the small number of leaders in the National Assembly, the MQM-P bargained for three ministries and got two to remain with Imran Khan, a coalition that was broken on Wednesday.