Home World What is Ilhan Omar’s visit to Pakistan-occupied Kashmir trying to hide? 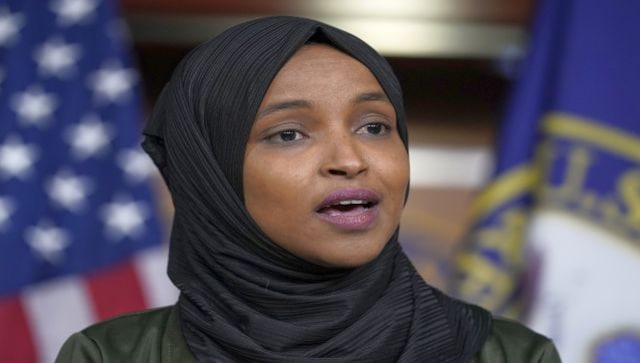 A group of over 30 American lawmakers led by Congresswoman Ilhan Omar had had introduced a bill in the House of Representatives in October last year. AP

The Islamist fantasy of a global Ummah — a mammoth wolf in an equally large sheep skin that eats, prays, loves, hates, intimidates and kills together but presents a humane, perpetually victimised front — looks unrealistic today.

Important parts of the Arab world are keen to break free from orthodoxy and embrace modernity if only to transform their sagging oil economies into diverse, globalised ones. In Indonesia, the nation with the biggest Muslim population, the largest Islamic organisation Nahdlatul Ulema is urging Muslims to stop using the word ‘kafir’ or infidel for non-Muslims. A bill to ban the niqab is set to be tabled in the Egyptian Parliament. The Sheikh Hasina government has been mulling restoring Bangladesh’s “secular” Constitution of 1972 after HM Ershad made Islam the state religion in 1988.

But there is another Islamic world which is hell-bent on living under the rock of bigotry and brutality. It is led by autocrat Recep Tayyip Erdoğan of Turkey, who dreams of being a modern-day caliph. From massacring northern Syria to hosting jihadis from Islamic State to Muslim Brotherhood and Kashmir terror groups, Turkey’s closest allies are a broke and chaotic Pakistan and jihad nursery Qatar.

And who is the useful errand girl in the US of this growing Islamist nexus? Congresswoman Ilhan Omar.

Which is why her visit during Ramzan to Pakistan-occupied Kashmir (PoK) could point to a larger plot.

Taking a leaf out of Hamas’ tactics in Israel and Palestinian areas, there seems to be an attempt to normalise street violence during Ramzan. Across Indian cities, Islamist mobs have attacked Hindu processions on Ram Navami and Hanuman Jayanti festivals which coincide with the Muslim holy month.

The timing of Omar’s Pakistan visit seems perfectly coordinated to provide an international PR foil for the violence, drowning it in trumped-up propaganda that Indian Muslims are being persecuted in Kashmir and elsewhere in the country.

Omar has in the past attacked and sought to delegitimise Indian Kashmiri journalist and victim of Islamist ethnic cleansing Aarti Tikoo Singh, who had testified in the US Congress. Ilhan attacked Aarti echoing the stands of a shadowy group like Stand With Kashmir (SWK). She even gave a long interview to SWK.

“The SWK works with Islamist organisations such as the US proxy for Jamaat-e-Islami, the Islamic Circle of North America,” writes Martha Lee of the Middle East Forum, a Washington-based think tank. “Since August 2019, as protests over Kashmir have intensified around the world, SWK has become an essential voice of the anti-Indian movement in the US. The organisation’s actual intentions appear to be more sinister. The Middle East Forum (MEF) has uncovered that SWK also works to lionise and defend violent Islamists committed to the murder of Indian troops and civilians.”

SWK is small compared with InterAction, a US taxpayer-funded umbrella of charities, some of which are extremely dodgy. InterAction’s Together Project (TP), for instance, contains five core Islamist charities with documented links to extremist movements, writes Sam Westrop of MEF. These are Helping Hand for Relief and Development (HHRD), Islamic Relief, Zakat Foundation of America, American Relief Agency for the Horn of Africa, and United Muslim Relief.

Omar has publicly embraced Islamic Relief and HHRD, the sister organisation of Islamic Circle of North America (ICNA), which is the Western branch of the Jamaat-e-Islami. HHRD has sponsored a conference by multiple branches of Lashkar-e-Taiba in Pakistan. Omar starred in a fundraising video for the ICNA and is thick with the director of programmes of its sister concern HHRD, Ilyas Choudhry, writes MEF’s Cliff Smith.

Omar’s PoK visit and meeting with former Pakistan PM Imran Khan is so problematic that the US had to officially announce it was an unofficial personal visit and it did not represent any policy change on behalf of the US government.

“Exploiting her position as a Congresswoman, Omar has repeatedly placed her Islamist affiliations as a priority ahead of all else. She has been happy to offer compassion towards Muslims, such as Indian Kashmiris or Chinese Uighurs, when a non-Islamist is the ‘oppressor’. But she is willing to neglect the plight of Muslim Kurds who are being displaced and massacred on the orders of a Turkish Islamist tyrant [Erdogan],” she writes.

It is not just Omar who has been activated. UK Labour MP Naz Shah joined her in attacking India.

My message to @BorisJohnson on his visit to India is that our nation’s foreign relations must not just be based on trade & internationalism but also on human rights.

My plea to the @10DowningStreet is to raise the growing issue of Islamophobia with the Modi Government. (1)

India must brace for a global Islamist propaganda onslaught as covering fire for increasing street violence at home. But it must hold its nerve. Islamists can smell the respect for peace and free speech in democracies and interpret it as weakness. They exploit it.

Which is when democracies must act tough. Because that is what the people who have voted the government to power expect from it: protection from predators.