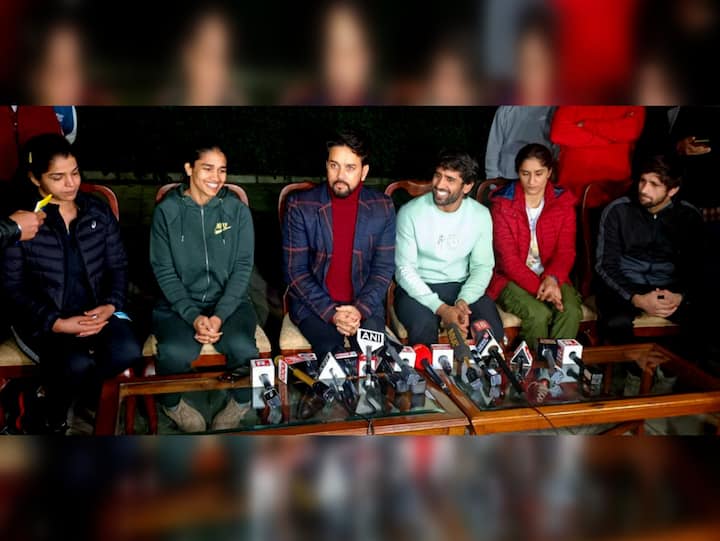 Wrestlers protesting alleged sexual harassment in the Wrestling Federation of India have alleged that they were not consulted when the government formed an oversight committee to look into the accusations.

A day after the names of the committee members were announced on Monday (January 23), Olympic medal-winning wrestler Bajrang Punia tweeted that despite the government promising to consult them in the matter, they weren’t. Tagging Prime Minister Narendra Modi, Union Home Minister Amit Shah, and Union Sports Minister Anurag Thakur, Punia Tweeted: “We were assured that we would be consulted before the Oversight Committee was formed. It is very sad that we were not even consulted before the formation of this committee.”

However, sports ministry officials were quoted as saying by news agency ANI that three out of the five names in the oversight committee were suggested by these (protesting) wrestlers.

The oversight committee was announced by Anurag Thakur last week to look into the daily working of the WFI after several wrestlers, including Punia, Malik, Vinesh Phogat, Ravi Dhaiya, and Deepak Punia alleged irregularities in the WFI. They accused the WFI of indulging in mismanagement and sexual harassment of women wrestlers. The panel would also look into the allegations, the minister said.

Thakur also said that BJP MP Brij Bhushan Sharan Singh was asked to step down as the WFI president till the committe’s inquiry is completed.

WHAT WRESTLERS ARE PROTESTING

WFI and its president, Brijbhushan Sharan Singh, have been in the limelight after top Indian wrestlers accused Singh of sexual harassment last week and went on strike to demand an investigation.

The wrestlers had accused Singh, who is also a BJP MP, of acting like a dictator and sexually harassing junior wrestlers. The wrestlers did not reveal the identity of the athletes who faced sexual harassment.

The wrestlers ended their sit-in protest at the parliament building on Saturday after the government promised a four-week investigation into their complaints.

“We are ending our protest,” stated Bajrang Punia, one of the protesting wrestlers. The wrestlers, who included young Anshu Malik, Sangeeta Phogat, and Sonam Malik, began a sit-in protest at Jantar Mantar in Delhi last Wednesday, demanding that the WFI chairman be fired.

The wrestlers also demanded that the WFI be disbanded immediately and a new panel be formed, including grapplers.

The aggrieved players called off their protest after getting assurances from the government that their grievances would be addressed and Brij Bhushan Sharan Singh was asked to step aside for four weeks.