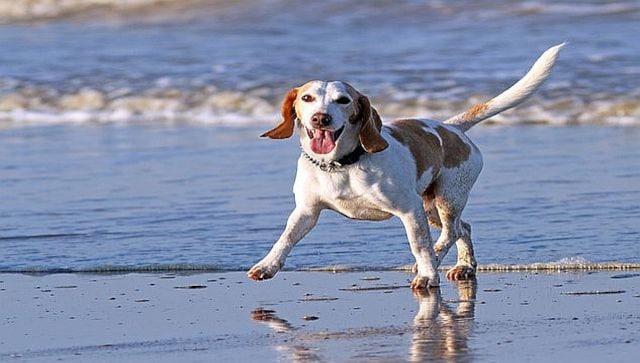 Ukraine has faced much devastation since Russia invaded the country on 24 February this year. While Moscow continues to launch missile attacks on its pro-western neighbour, a number of major cities including the capital Kyiv were reported to be left without power and water supply. Along with this, people also have to deal with the freezing temperature as the winter settles in. However, the administrative department is trying to do its best and extend its help to the general public even in the worst kind of scenarios. The same was witnessed in a recent viral video where a few Ukrainian police personnel risked their lives to rescue a woman and her pet dog from a frozen lake.

The heart-winning clip was shared by ABC News on their official Instagram handle. In the clip, some officers were spotted gathering near a glacial pond somewhere in war-torn Ukraine. One of the members of the team took off his clothes and decided to venture into the water body covered with a thin cover of ice.

He directly got into the ice-cold water with a long rope in his hands and crouched near the victims, instructing them on how to reach the shore safely. The remaining officers waited at the bank, holding the other end of the rope. After some moments, the woman was seen coming out of the lake with the aid of the rope. Later, her dog also joined them safely.

The caption of the Instagram reel reads, “Ukrainian police officers bravely venture into a frozen lake to save a woman and her dog who were trapped on thin ice.” Since being uploaded on the internet, the humanitarian act earned much appreciation from social media users.

The clip has received more than 50,000 views and has also garnered thousands of likes so far. Lauding the first officer, a user wrote, “That man was built differently.” Another person termed him “a brave man.” An individual noted, “Bless them.”

Earlier on 13 December, a meeting of Kyiv’s allies in Paris resulted in a pledge of little over 1 billion euros ($1.44 billion) to aid Ukrainians in surviving the severe winter. According to French Foreign Affairs Minister Catherine Colonna, about 70 nations and organizations have committed to support Ukraine in retaining its access to water, food, energy, health care, and transportation. According to Ukrainian President Volodymyr Zelenskyy, the country requires a minimum of 800 million euros to combat the present reality.