According to the official Twitter handle of U2, the band members had been invited to perform by Ukrainian President Volodymyr Zelenskyy “as a show of solidarity with the Ukrainian people” 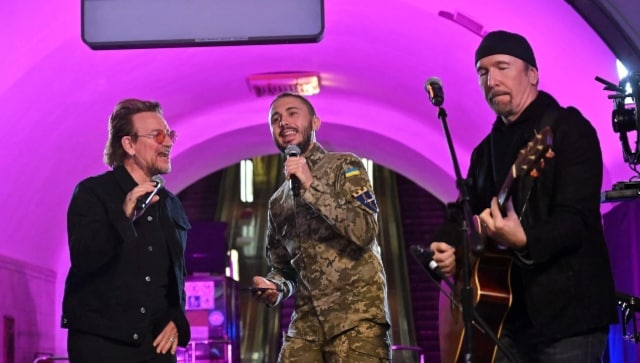 Bono, Taras Topolia and “The Edge” perform at a subway station-turned-bomb shelter in the Ukrainian capital of Kyiv on Sunday.

Bono, frontman of legendary rock band U2, and his bandmate the Edge recently performed at the Ukraine’s capital Kyiv, sharing the stage with the country’s popular pop-rock band Antytila. The rock band shared a video of their musical performance on social media as well.

The concert took place in an underground metro station in the Ukrainian capital. The 40-minute performance saw the Irish rock band play some of their greatest hits. According to the official Twitter handle of U2, the band members had been invited to perform by Ukrainian President Volodymyr Zelenskyy “as a show of solidarity with the Ukrainian people”.

President @ZelenskyyUa invited us to perform in Kyiv as a show of solidarity with the Ukrainian people and so that’s what we’ve come to do. — Bono and The Edge #StandWithUkraine

The rock legends had also invited Antytila’s frontman Taras Topolia and other members of the pop-rock group to the event. The Ukrainian band’s members were dressed in military fatigues as they jammed alongside Bono and the Edge.

They also gave an impromptu performance of Stand By Me, changing the part to “Stand By Ukraine”.
“Tonight we came from Kharkiv to Kyiv at the personal invitation of world legend Bono, @u2 . We sang ‘Stand by you’ without rehearsal, only impromptu!” Antytila wrote on Instagram sharing a video of their show.

The band also requested Bono to help Zelenskyy in arranging the evacuation of Ukrainian soldiers from the Azovstal steel mill in Mariupol, “where the Russians are arranging a literally hell, just right now.” The mill is the last bastion of resistance against Russian troops in the war-ravaged port city. Antytila was earlier in the news this year after they had been denied permission to perform at Ed Sheeran’s ‘Concert for Ukraine’. While the pop-rock band wanted to perform remotely from Kyiv, organisers of the concert dismissed the idea as the event was for humanitarian purposes and wearing helmets and holding arms, like the band was doing, would not align with the same. However, the band did collaborate with Sheeran later on an updated version of his song 2Step. Watch the collaboration here:

As for Bono, the singer said that the people of Ukraine were fighting “ not only for their own freedom, but “for all of us who love freedom”, according to Al-Jazeera. The singer also hoped that peace would soon prevail in the region.