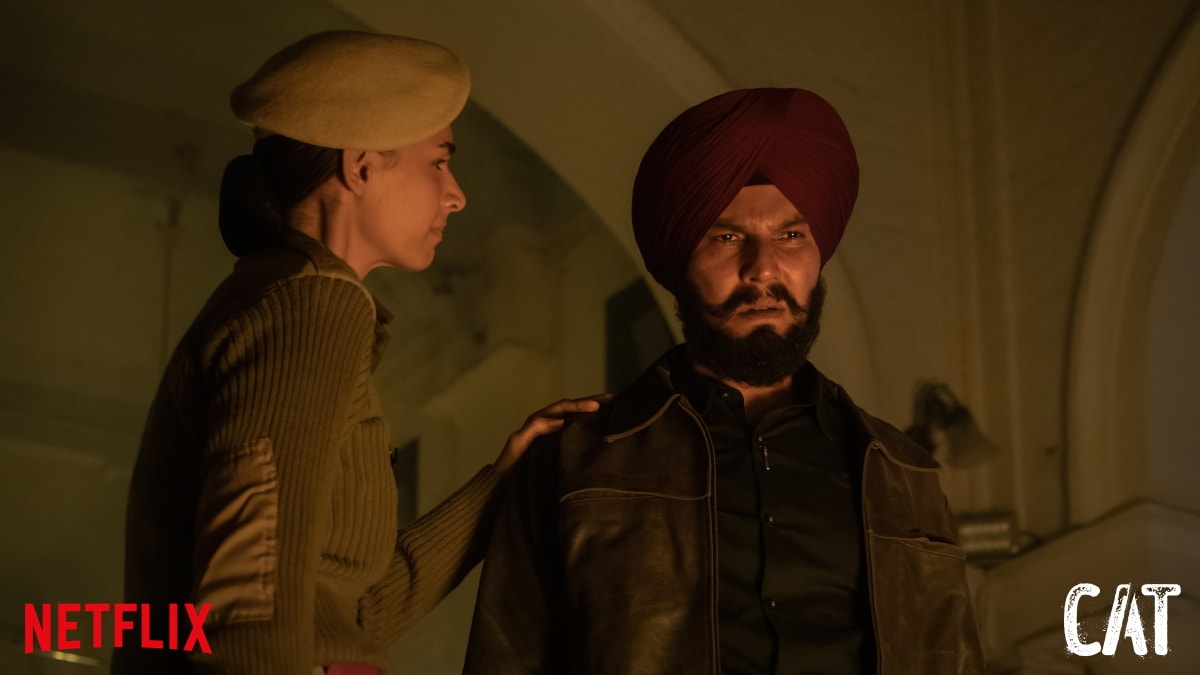 Randeep Hooda-led CAT trailer is here. Ahead of its December 9 debut, Netflix has dropped two regional language — Punjabi and Hindi — trailers for its newest spy series, and they feel equally intense. Set in the Punjab hinterlands, CAT follows a former police informant Gurnam Singh (Hooda), who is summoned back into the force, to go undercover and investigate a major drug empire. The series is created and partly directed by Balwinder Singh Janjua (Saand Ki Aankh), and marks Hooda’s debut in a series.

The CAT trailer opens with a voiceover comparing the age-old crimes in the state of Punjab to new, drug-fuelled ones. “With great difficulty, we have taken Punjab out of the darkness of terrorism. Now, these white clouds of drugs have engulfed out Punjab,” the unseen character says. We then cut to our lead Gurnam (Hooda), an honest worker, liberated from his service during the 90s insurgency, visiting the local police station, in hopes to free his younger brother Sunny (Danish Sood). What’s initially assumed to be a case of cheating in exams is soon revealed to be something far sinister. “He wasn’t cheating in exams. Your brother was selling drugs,” police officer Babita Masih (Hasleen Kaur) explains to him.

We’re then introduced to Sehtab Singh (Suvinder Vicky), a senior officer, who plans to end the drug business in his jurisdiction, before retiring for good. “The fire, which is in your house is gradually burning the whole of Punjab,” he tells Gurnam, stressing on the importance of urgent action. “Tell me! Will you be my CAT again?” Reluctantly, he accepts the offer, infiltrating the drug mafia and feeding information to his lawful partners. Of course, the induction isn’t that easy, with members of the illicit organisation questioning the new member on his history. “Nothing will happen,” the leader says in the CAT trailer. “And if something does happen, there is his younger brother Sunny.”

“Ephedrine is mixed with it and is sent to Canada,” Gurnam explains, before the trailer blends into a montage of action sequences, a funeral procession, and locals setting vehicles ablaze. Previous reports mentioned that Gurnam had some dark traumas stowed away, that is briefly teased at the end of the CAT trailer, where he aims a firearm, asking, “Why did you cheat me?”, presumably hinting that he encountered a past acquaintance. CAT also stars Geeta Aggarwal (Chhapaak), Dakssh Ajit Singh (Arsho), Jaipreet Singh (Sacred Games), Sukhwinder Chahal (Mirzapur), Pramod Pathal (Mirzapur), KP Singh, and Kavya Thapar (Ek Mini Katha).

“CAT is a very unique story and I am glad we could collaborate with Netflix to bring this story to life. As a writer and director, I will define CAT as a story of relationships — be it family, friendship or deceit! It’s a story set in Punjab and explores two timelines as well as the underbelly and its complexities through well defined characters,” creator Janjua said in a prepared statement. “We’ve shot in over 80 locations across Punjab to bring authenticity and flavour to the fore. Working on CAT has been a rewarding journey and I can’t wait for the audience to experience it.” Janjua directs a few episodes on the series, alongside Rupinder Chahal (Puaada) and Jimmy Singh.

CAT premieres December 9 on Netflix in Punjabi, Hindi, and English. All episodes will be available at once.