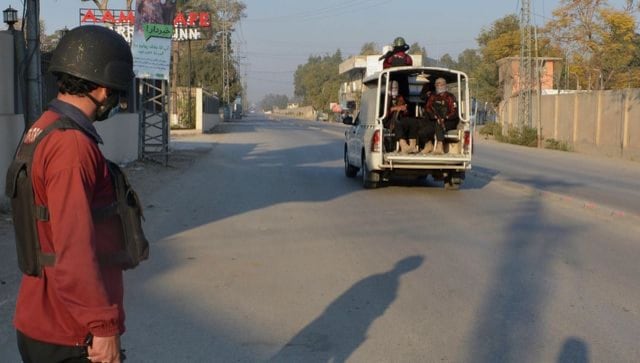 Security officials patrol on a blocked road leading to a counter-terrorism center, where several Pakistani Taliban detainees have taken police and others hostage inside the compound, in Bannu, a district in the Pakistan’s Khyber Pakhtunkhwa province, on 19 December, 2022. AP.

In the video, a Taliban spokesman claims that they are 35 in number and holding eight to ten hostages and that the latter would be killed they were not allowed safe passage.

The Taliban spokesperson is heard saying that he “had a dream to catch him (Major Khurshid Akram), kill him… we should be allowed to go to Afghanistan, otherwise we will kill them (the hostages).”

The incident comes amid escalating border tension between Pakistan and Afghanistan.

The Pakistani Taliban terrorists on Sunday seized a counter-terrorism centre when an arrested terrorist who was interrogated at the CTD police station inside the Bannu Cantonment snatched an AK-47 from police and opened fire.

He then freed other suspects who were being held at the building and they took control of the premises.

“The terrorists infiltrated into the Cantonment and freed imprisoned wanted terrorists. They subsequently took control of a section of the compound, holding CTD security personnel hostage,” police said.

A report by Dawn.com quoted a senior police officer saying that around 25 arrested members of banned terrorist organisations were under arrest and interrogation at the CTD centre when they took the guns from seven security personnel who were on duty and made them hostages.

The situation turned worse with the terrorists holding up several policemen and people as hostages, prompting authorities to put the army’s special forces on alert.

Khan Durrani, a former chief minister of the province, and sitting provincial minister Malik Shah Muhammad are in Bannu to talk with the militants. Both Durrani and Muhammad hail from Bannu.

The terrorists have demanded to call a local religious figure, Maulana Ahmed Ullah, for negotiations with the security forces.

They also allowed a hostage to talk to their senior security officers on a mobile phone for coordination in the process.

The Special Service Group troops were put on alert for a rescue operation if negotiations failed.

Pakistani Taliban terrorists have demanded the security forces provide them with a helicopter to reach Afghanistan safely.

There are about 30 terrorists reportedly involved in the takeover of the Khyber Pakhtun­khwa police’s Counter Terrorism Department (CTD) headquarters in Bannu.

The Internet services in the Bannu Cantonment have been suspended.

Banned Tehreek-e-Taliban Pakistan (TTP) in a statement said that several of its members were among those who took Bannu CTD Staff hostage.

It asked the government to shift prisoners either to South or North Waziristan where the TTP has hideouts/presence otherwise the army will be responsible for all damages.

The TTP, set up as an umbrella group of several militant outfits in 2007, last month called off a ceasefire agreed upon with the federal government in June and ordered its militants to stage terrorist attacks across the country.

The group, which is believed to be close to al-Qaeda, has been blamed for several deadly attacks across Pakistan, including an attack on army headquarters in 2009, assaults on military bases, and the 2008 bombing of the Marriott Hotel in Islamabad.