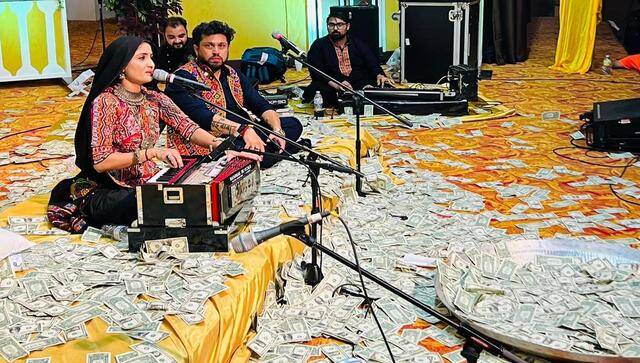 Since the war broke out, people from all over the globe have stepped up to provide help to the war-torn country — be it humanitarian assistance from other nations or generous donations by individuals and small groups Gitaben Rabari and Sunny Jadhav being showered with cash in Dallas, USA. Facebook/GeetaRabariOfficial

As the conflict between Russia and Ukraine continues, people from all over the globe have stepped up to provide help to the war-torn country — be it humanitarian assistance from other nations or generous donations by individuals and small groups.

In a similar gesture of empathy, a Gujarati folk singer duo have now come forward to help the war-torn country with their talent.

Recently, a video featuring vocalists Gitaben Rabari and Sunny Jadhav has won hearts online. The two singers can be seen dressed in traditional ethnic clothing and performing popular folk songs in the clip. As they continue to enchant the crowd with their melodious songs, delighted audience members are seen showering them with cash, up to the point that the stage is entirely covered with money. Take a look at the video:

The musicians were in Dallas, USA, earlier this week for a musical event called Lok Dayro, which was part of their big musical tour in the country. The Lok Dayro event has been organised by the Manpasand group.

After the video went viral, Rabari took to social media to announce that one of their events in the US, organised by the Surat Leuva Patel Samaj (SLPS), collected $3,30,000 (approximately Rs 2.5 crore) to aid Ukrainians fleeing their homes amid the ongoing war. Take a look at photos from one of the group’s concerts:

This is not the first time that charity concerts have been organised to collect aid for Ukraine. Pop singers Ed Sheeran and Camila Cabello recently performed in the United Kingdom to raise money for the war-hit, collecting about £12.2 million, as per reports.

A similar concert was organised in Poland and featured a young Ukrainian girl, Amelia Anisovych, singing her country’s national anthem before an audience of thousands. The young girl had earlier gone viral for singing Idina Menzel’s Let It Go, while inside a bomb shelter in Ukraine.

Soon after the video went viral, Anisovych fled to Poland. The concert she participated in raised $380,000 for Polish Humanitarian Action (PAH), an organisation involved in providing aid to Ukrainians displaced by the war.