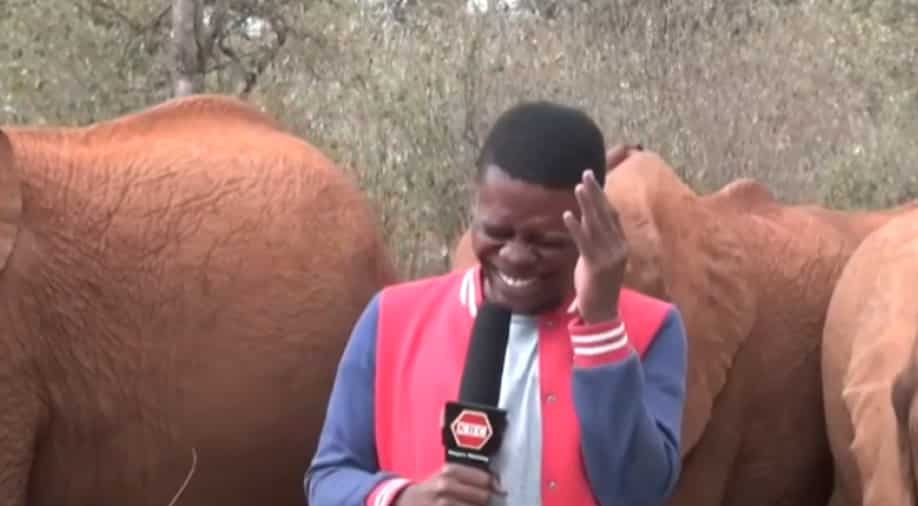 A Kenyan journalist Alvin Kaunda received an uninvited guest on camera while he was filming a piece to camera from a baby elephant orphanage in southern Kenya.

In his reporting, Kaunda was speaking on conservation of wildlife species. The video shows him standing among baby elephants. Despite surrounded by the wildlife creatures Kaunda appears to be at ease during his reportage.

Kaunda was reporting for Kenya’s Broadcasting Corporation (KBC) on the way baby elephants at the orphanage were being looked after.

What comes next has set social media abuzz with animal lovers leaving positive comments to the viral video. Suddenly, the baby elephant in the background started to tap on Kaunda’s shoulder. It comes up from behind the journalist and put his trunk on his shoulder and face.

Taking a step ahead with Kaunda, who was seemingly calm, the elephant slowly moves his trunk to run it over the journalist’s face and poking his nose.

By this time, the video shows the Kenyan journalist and his cameraperson bursting into laughter.

This is not the first time when animals have been caught on camera interrupting humans, especially during the COVID pandemic when they had to work from home.

Meteorologist Paul Dellegatto was interrupted by his golden retriever while filming the evening forecast. CBS reporter Kim Powell was reporting the news from her home computer when her cat also walked right through the shot.

Purported Interview Of Goldy Brar Surfaces, Gangster Claims He Is Not...

News Next Desk - December 5, 2022 0
External Affairs Minister S Jaishankar on Monday pushed for the repatriation of a one-and-a-half-year-old Indian child, who is in foster care in Berlin, during...

News Next Desk - December 5, 2022 0
The Indian High Commission in London on Monday announced the reinstating of the electronic visa (e-visa) for UK travellers, a move that will be...

This is how Malaika Arora-Arbaaz Khan’s son Arhaan Khan reacted to...

News Next Desk - December 5, 2022 0
NEW DELHI: Relationships, Glamour and more. This Bollywood's iconic diva has seen it all. Captivating the hearts of millions with her stellar dance moves...

News Next Desk - December 5, 2022 0
Slack CEO and co-founder Stewart Butterfield is leaving Salesforce in January, reports Business Insider. Butterfield helped co-found Slack in 2013 after Glitch — a...
%d bloggers like this: