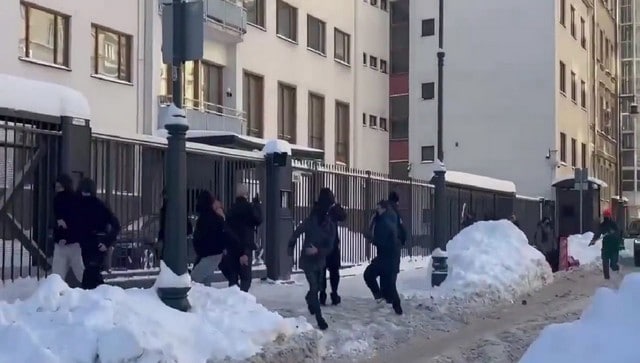 Screengrab from the video. Courtesy: @Gerashchenko_en/Twitter

Moscow: A group of men were seen throwing sledgehammers at the Embassy of Finland in Russia’s capital Moscow.

In the video shared on Twitter by Anton Gerashchenko, an advisor to Ukraine’s Ministry of Internal Affairs, a group of five to six men were seen running towards the embassy armed with sledgehammers and throwing them from a distance with an aim to hit the windows.

Gerashchenko said, “Unidentified persons threw sledgehammer at the embassy of Finland in Moscow.

“I wonder whether there are a lot of foreigners now in Russia and do they feel safe?” he asked.

Unidentified persons threw sledgehammer at the embassy of Finland in Moscow.

I wonder whether there are a lot of foreigners now in Russia and do they feel safe? pic.twitter.com/IWFnSb6M3a

The official website of Finland’s Ministry of Foreign Affairs says that in 2022, the country sent economic aid worth 300 million euros to a war-torn Ukraine.

Out of this total amount, 100 million euros are in the form of humanitarian assistance and the rest consists of defence material assistance.

Finland has also promised to help Ukraine based on its needs in the future. Material assistance which includes things like tents, medical supplies, fire engines, ambulances and backup generators has been sent via the European Union Civil Protection Mechanism.

Following the onset of winter in November, Finland ramped up military assistance to Ukraine. The country’s Defence Minister Antti Kaikkonen said, “It is important that we keep supporting Ukraine and providing it with the means to end the war.”

“Ukraine is fighting and defending its independence and freedom, it’s right to help assist Ukraine in this situation. That’s why Finland and most European countries help,” he further told Euronews in an interview.

The tenth Finnish defence package was valued at 55.6 million euros.

According to a report by Ukraine’s local media, Finland’s President Sauli Niinistö said that the country is set to send another assistance package to Ukraine. He was heard saying that support for Ukraine must continue until peace prevails in the country.