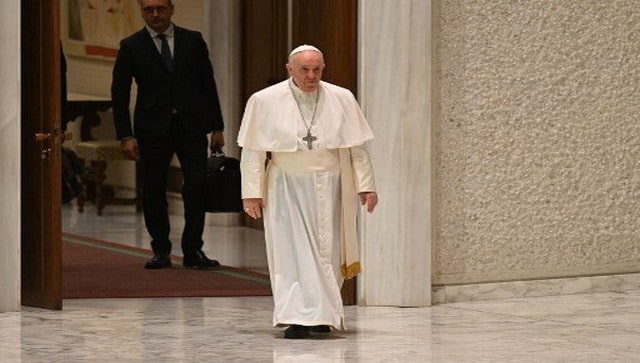 The situation of millions of Ukrainians who remain shaken by Russian attacks is known to the world. As the people in the country grapple to survive in the crisis situation, this has drawn global attention from other countries as well who are standing to show solidarity with the people of Ukraine. Besides that, many have also condemned the Russian attacks and further showed their protest by imposing sanctions on Russia. Amid this, as the country continues to battle war for several months now, Pope Francis who is also among the ones to condemn Russian attacks recently broke down while speaking about the situation in Ukraine. It was during his visit to Rome for his annual Christmas visit when the Pope was addressing the people and was seen getting emotional.

A video of the same has been shared by ABC News on its Instagram handle. While the caption of the post reads, “Pope Francis breaks down while speaking about war-struck Ukraine”, the video clearly shows how Francis broke into tears during his speech.

As the video plays, we can see Pope Francis addressing the people as he spoke about the condition in Ukraine and the suffering of millions of Ukrainians. During this while, he got overwhelmed with emotions and teared up. As he leaned over and held his speech, people around him applauded him and asked him to continue.

As soon as the video was posted, it went viral on the internet and grabbed the attention of many people. Many took to the comment section and shared their reactions. One wrote, “It’s beautiful to see a sincere prayer lifted up to the Lord by a man who has pledged his life to serve Him”, while another person commented, “I think we’ve desensitised ourselves to human suffering. The Pope probably knows more about the atrocities that are going on in Ukraine. Everyone should be weeping ….”

It is pertinent to note that this is not the first time when the pope got emotional about Ukraine. On several instances in the past, he was seen expressing his solidarity with the people and also called for peace talks instead of violence.