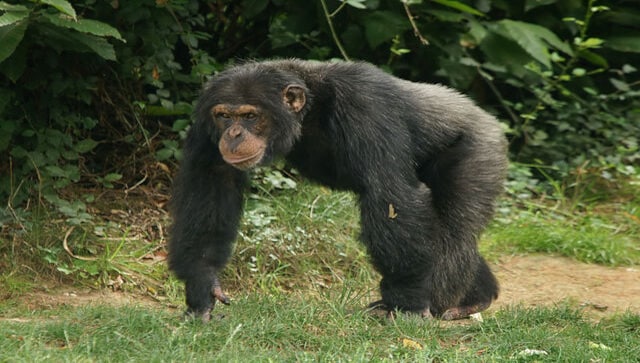 There is no doubt that a mother’s love for her children is unconditional. Whether that be humans or animals, the love and affection remains the same as mothers leave no chance to care for their kids. One such affectionate moment showing a mother’s love for her baby was witnessed at a zoo in the United States when a mother chimpanzee was reunited with her newborn baby two days after its birth. A video of their emotional reunion was also shared by the Sedgwick County Zoo, where the baby chimp was born.

The heart-melting shows the mother, named Mahale, being brought into her shelter where the baby was already kept wrapped in a piece of cloth. Initially, a bit confused about the situation, Mahala later spotted her baby and excitedly embraced the infant to her chest.

The zoo employees who were also present at the spot applauded Mahale’s warm gesture. One of them said, “Good job, Mahale!”

The zoo also posted the entire story along with the video and wrote, “Mahale gave birth via C-section after her labour had stopped progressing. The baby wasn’t getting enough oxygen on his own at birth so he had to stay in the hospital to receive treatment and care from the medical team until he was healthy enough to return to mom.”

Starting from the delivery of the baby, its treatment, and then its reunion with the mother, the zoo has been giving regular updates about the baby chimp. Adorable pictures of the little one were also shared on the zoo’s Instagram handle.

Notably, the baby chimp has been named ‘Kucheza’, meaning ‘play’ in Swahili. According to the Kansas-based zoo, the decision to perform a C-section was made after the team of doctors noticed the mother chimpanzee facing difficulties with performing labour.

In the meantime, ever since the video and pictures have been shared, many took to the comment section and shared their reactions. One wrote, “This is the most precious thing. The way she immediately grabbed her baby!!”, while another person commented, “How adorable when she saw her baby reach up and she wiggled her in her arms of excitement.”