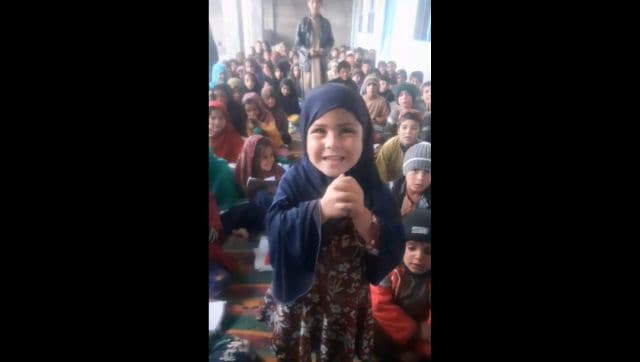 The real and ugly truth of Afghanistan is known to the world and there is no denying that the people including men, women, and children live in terrifying situations and face severe challenges under Talibani rule. As a part of the present government in the country, women are said to be most-affected as they have been put under multiple restrictions concerning their education and career. Amidst all these atrocities, a video has now started making rounds on the internet which will definitely bring a smile to your face.

The video recorded in a primary school in Afghanistan shows how a little girl can accurately pronounce some basic English alphabets and looks quite proud of herself as the teacher and other students applaud her. The video is no doubt too cute to handle and has grabbed the attention of many including Bollywood actress Raveena Tandon.

Retweeting the video on her Twitter handle, the actress added a caption that reads, “The cutest thing on my twitter line today!”

As the video plays, we can see a little hijab-clad girl standing in a classroom filled with students. As soon as she is asked by her teacher to recite the English alphabet, she cutely starts doing so with a smile on her face. In between, she also misses a few letters.

As soon as she finishes off, the teacher praises her, while her classmates clap for her. The video has been going viral since it was originally shared by a journalist named Naser Khan on Twitter.

Many took to the comment section and shared their reactions. One wrote, “Unfortunately school doors are closed on the face of our brave girls and the world is blind, our current and even future generations look in the dark. Please be our educational ambassador and ride the voice for poor Afghans”, while another user commented, “May God Bless these kids with education and knowledge similar to their cuteness.”

Thanks so much that’s you support Afghan girls

I wish hope and pray that be treated equally in their society and given this basic right , right to education

It’s been 1 and half year that Taliban banned school for over 10 million girls in Afghanistan and now they ordered some universities to not accept women admission, in last week the Taliban flogged and stoned dozen of women. Full scale Talibanization of Afghanistan underway.

Madam, We Afghans are a large pool of talent and blessed with meritorious care from whole fronts but the ISI of Pakistan deface Afghans via its proxy, Taliban terrorists as antagonistic nation for education. Its confirmed that Pakistan’s ISI continues to derail AF from developmen

In the meantime, the video has so far grabbed over 168K views. Besides, the post has also amassed thousands of likes and a few comments.