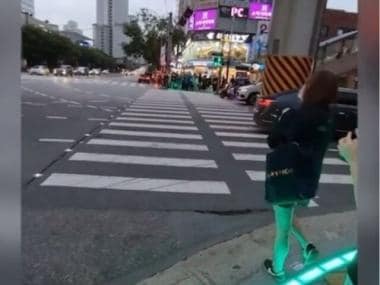 With stunning internet connectivity and innumerable intriguing apps to surf on, smartphones are nothing less than an obsession among the current generation. It may seem impossible to put an end to smartphone addiction as the undivided attention to phone screens has also reportedly added to the increasing number of accidents. Now, it appears that South Korea is the first nation to come up with a solution. Exhibiting the adage that modern problems need modern solutions, Seoul has installed traffic lights on the ground instead of up on poles. Yes, you read that right. Already living ahead of its time, the Asian country has come up with this technology to help people who are glued to their phone screens while crossing the roads. In the nation, such people are called Smombies i.e. smartphone obsessed zombies.

The unique technology came to light after Indian industrialist Shrinivas Dempo took to his official Twitter account to share a video of South Korean citizens using the new street lights. While sharing the video, the businessman wrote in the caption, “Sign of the times: Traffic signals move down to the road level at this crossing in Seoul so that people they call Smombies (smartphone-obsessed zombies) can safely cross the roads while using their smartphones.”

In the video, the pedestrians can be seen waiting at the zebra crossing of a busy road in Seoul. But that’s not what has everyone’s attention. All the eyes were fixed on a red LED light on the pavement, behind which people can be seen standing. After a few seconds, the light turned green and the commuters started crossing the road.

Sign of the times: Traffic signals move down to the road level at this crossing in Seoul so that people they call Smombies (smartphone obsessed zombies) can safely cross the roads while using their smartphones. pic.twitter.com/i5zHTGmZhh

Originally the video was shared by a Twitter user named Trung Phan, who while sharing the video wrote in the caption, “South Korea put pedestrian street lights on the ground cause so many pedestrians were staring at phones.”

A few called out people who use phones while walking on the road and claimed that such technologies are motivating people to continue their habit. Another commented, “I still think it’s callous to use your phone while taking a walk or commuting on foot. Are you justifying people using their phones excessively as something work-related?”

I still think it’s callous to use your phone while taking a walk or commuting by feet. Are you justifying people using their phones excessively as something work related?

News Next Desk - December 2, 2022 0
Twitter owner Elon Musk said he met with Apple chief Tim Cook on Wednesday and "resolved the misunderstanding" that prompted him to declare war...
%d bloggers like this: