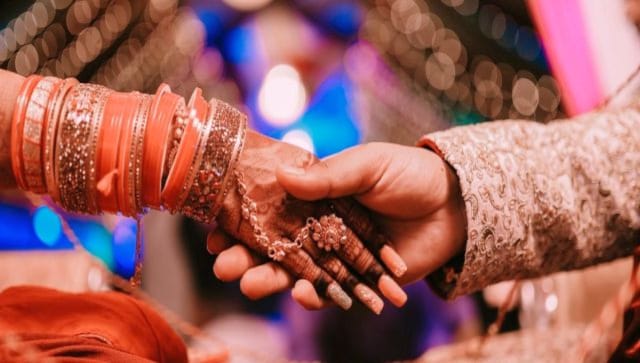 Wedding traditions around the world come with their own unique rituals. One such wedding ritual that is grabbing the attention of the internet comes from Nepal. A video doing the rounds on social media shows how a bride and a groom got involved in an intense fight during their wedding. The fight was part of a wedding ritual and not a personal conflict. In the video, the bride and the groom could be seen dressed in traditional wedding attire. The couple begins the ritual of feeding each other but they soon end up physically pushing each other. The groom is seen smiling as the equally competitive bride tries to feed him first.

The onlookers can also be seen preventing the bride and groom from getting into a full-blown fist fight. The video has attracted mixed reactions from viewers. While those who are familiar with the Nepali wedding tradition were quick to share their views, there were others who expressed their bewilderment as well. A confused user commented, “What on earth is happening here?”

A user who thought that the fight was for real commented, “OMG maybe they should rethink this marriage.” Another user wrote, “Well, that’s one way to start a lifelong commitment.”

In response to the comment, a Nepali native wrote, “It’s not staged. I can attest to this being a marriage tradition as I’m from Nepal, and the bride and groom play this game of ‘who wins at feeding first’. It’s chaotic but fun for sure. Even funnier in person as the entire crowd goes crazy cheering.”

Another Nepali viewer commented, “As a Nepali I’ve already seen that happening in a wedding…..just stay away from the groom and bride for your own safety.”

A user came up with a hilarious response to the video and wrote, “They could have at least waited till they got back to the hotel to tumble around in front of family and friends.”

What are your thoughts on this video.

News Next Desk - January 31, 2023 0
New Delhi: President Droupadi Murmu on Tuesday made her first address to the joint sitting of the Parliament. She said that by 2047, we...
%d bloggers like this: