Home Entertainment Vicky Kaushal wishes dad Sham Kaushal a Happy Birthday with heartwarming post,
It is no secret that actor Vicky Kaushal shares a deep bond with his family. The “Uri” actor, who will soon be seen in the comedy caper, “Govinda Naam Mera” is extremely grounded and simple and has often mentioned that his family, that includes dad Sham Kaushal, mother Veena, brother Sunny and now, wife Katrina Kaif are his world.

Earlier today, the 34-year-old took to his insta stories to wish his dad, former stunt director Sham Kaushal, a very happy birthday. Calling him his pillar of strength, Vicky mentioned that he is sending him the biggest virtual hug ever. He wrote, “My pillar of strength…Happy Birthday, Dad!!! Khichke Jhappi Twahnu.” In the black and white pic shared by Vicky, it looks like his dad is giving him a virtual hug, presumably at an award function where Vicky is being felicitated, while his mother Veena Kaushal emotionally looks on. 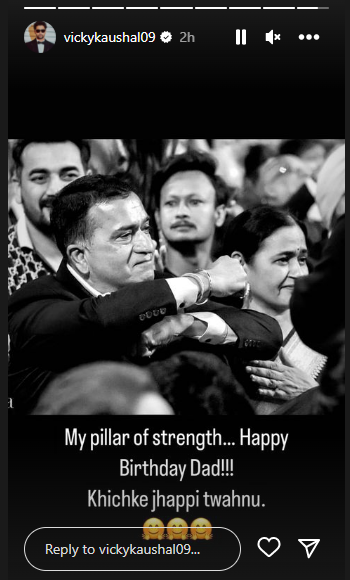 Vicky Kaushal’s next, Govinda Naam Mera is the talk of town these days. The movie, touted as a light, breezy comedy is the story of a common man named Govinda who is going through some tough times as a junior background dancer. He seems to be in a lot of debt and his wife is having an affair. To make matters worse, there seems to be a murder that has taken place, further landing him in a soup.

Govinda Naam Mera will release on Disney+ Hotstar on December 16.

News Next Desk - December 8, 2022 0
NASA has warned that a dangerous asteroid is speeding towards the planet today. There is a cause to be worried as NASA has discovered an...
%d bloggers like this: