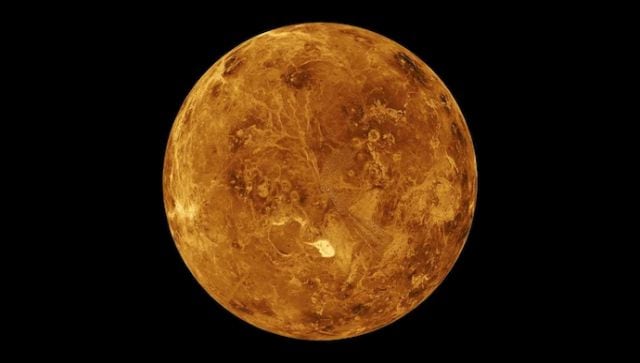 Venus as we know it has changed. Volacanism has caused a massive change in its climate. Image courtesy: NASA

Venus was a lot like Earth. The planets are often called twins – they are similar when it comes to size, mass, and gravity. It also has an atmosphere with clouds. But now a lot has changed on Venus; its once wet and temperate climate has turned acidic.

So what happened here?

Also read: Explained: Why a mission to send humans to Venus is not easy

The death of Venus

According to a research paper published by the National Aeronautics and Space Administration (NASA), volcanism could be changing the planet as we know it. Volcanic activity lasting hundreds to thousands of centuries and erupting massive amounts of material may have transformed it into an acidic hothouse.

Vocalnism of this scale lasts hundreds of thousands of years, spewing around 100,000 cubic miles of rock on the surface. This amount of molten rock is enough to cover the whole of Texas half a mile deep, the study says.

It’s mad hot on Venus; the temperature is a sweltering 464 degrees Celsius, which can even melt lead. There’s a crushing pressure of 90 atmospheres underneath the dense clouds of carbon dioxide laced with corroding sulfuric acid, reports Space.com. The scorching temperatures are a result of a runaway greenhouse effect. It does not help that Venus is nearer to the Sun than Earth – 40 million kilometres closer to be precise – and hence receives more heat.

According to reports, Venus was not always this hot and could have had a more temperate climate – a little similar to Earth. The NASA study argues that the volcanic activity on Venus could have caused its death by heat, as massive amounts of carbon dioxide, which is a potent greenhouse gas, were released into the planet’s atmosphere. Today, more than 80 per cent of its surface is covered in solidified volcanic rock. The “large igneous provinces” on Venus have been created over a million years. The lava spreading over hundreds of thousands of square kilometres is likely to have released so much carbon dioxide that it became difficult for the climate to cope.

“Any oceans would have boiled away, adding moisture to the atmosphere, and because water vapour is also a greenhouse gas, accelerating the runaway greenhouse effect. Over time, the water would have been lost to space, but the carbon dioxide, and the inhospitable world, remained,” says a report on Space.com.

The “large ingenious provinces” are not found on Venus alone. Millions of years ago they caused several mass extinctions on Earth, which the paper discusses.

“Large-scale volcanism has played a critical role in the long-term habitability of Earth. Contrary to widely held belief, volcanism, rather than impactors, has had the greatest influence on and bears most of the responsibility for large-scale mass extinction events throughout Earth’s history,” it says.

The Earth has reportedly seen five mass extinctions caused by eruptions which produced “large igneous provinces”. These events, which took place 540 million years ago, wiped out 50 per cent of life on the planet. However, the disruptions caused to the climate because of this volcanic activity did not lead to a runaway greenhouse activity like in the case of Venus.

Now scientists are trying to understand why the events on Earth were not large enough to cause the same scale of damage like on Venus.

“By understanding the record of large igneous provinces on Earth and Venus, we can determine if these events may have caused Venus’ present condition,” said Dr Michael J Way from NASA’s Goddard Institute for Space Studies and lead author of the study.

NASA’s next mission to Venus is expected to launch in 2027 and 2029 – the Deep Atmosphere Venus Investigation of Noble gases, Chemistry and Imaging (DAVINCI) and the Venus Emissivity, Radio Science, InSAR, Topography and Spectroscopy (VERITAS) mission. They aim to study in great detail the origin, history, and the present state of Venus.

The DAVINCI mission will come before VERITAS, which will investigate the surface and interior of the planet.

“A primary goal of DAVINCI is to narrow down the history of water on Venus and when it may have disappeared, providing more insight into how Venus’ climate has changed over time,” Way said.

Scientists hope that data from the two missions will help them zero in how Venus transformed from wet and temperate to dry and sweltering. They also believe that they can understand how vocalism affected life on Earth in the past and what dangers it holds in the future.

News Next Desk - December 6, 2022 0
“While we can’t comment on current events in the crypto markets or the details of any ongoing investigations, we are investigating several firms for...
%d bloggers like this: