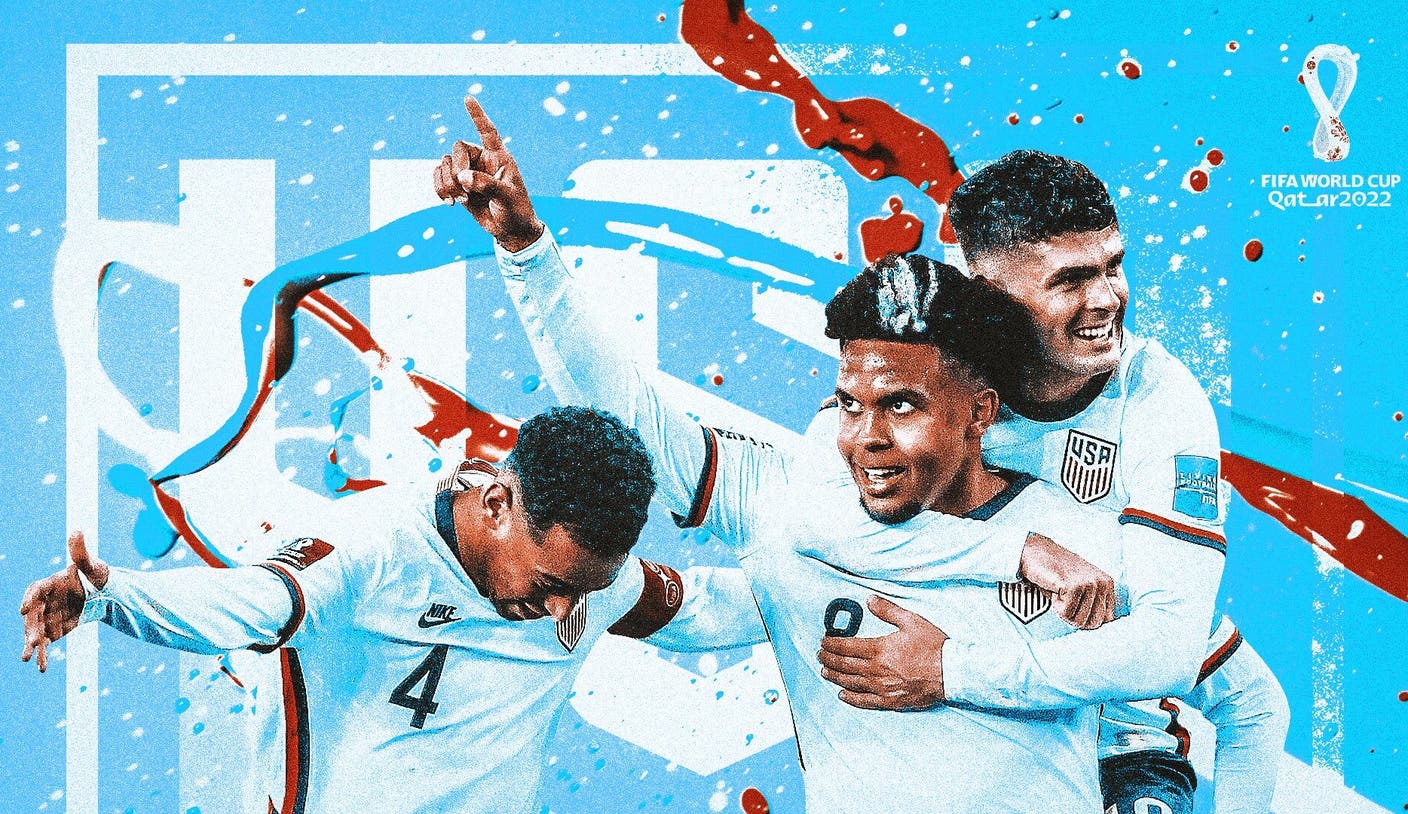 During an interview with FOX Sports in July to promote his new book, “Pulisic: My Journey So Far,” the reluctant face of the United States’ World Cup squad was asked how his low-key demeanor and leadership style differs from his polar opposite on the national team, rugged midfielder/life of the party Weston McKennie.

“He’s more outgoing than I am, for sure,” Pulisic said with a laugh. “I’m definitely much more reserved and laid back. I think we complement each other well.”

For the youngest team at the 2022 FIFA World Cup in Qatar, with an average age of just 24.5 years old, leadership will come from many places. From no-nonsense defender Walker Zimmerman. From 35-year-old fellow center back Tim Ream, captain of English Premier League side Fulham. From right back DeAndre Yedlin, the only player on coach Gregg Berhalter’s 26-man roster who has played in a World Cup before.

[Why Walker Zimmerman is the leader the USMNT needs]

But 24-year-olds Pulisic and McKennie — along with the nails-tough, wise-beyond-his-years, captain-in-waiting Tyler Adams, who at 23 might be even more indispensable than either to the USMNT’s chances in Qatar — are the three players who will drive the Americans’ effort when the U.S. kicks off its campaign Monday against Wales (2 p.m. ET on FOX and FOX Sports App).

Adams, McKennie and Pulisic have known each other since they were kids. Born less than six months apart, they were all members of U.S. Soccer’s now-shuttered under-17 residency program in Bradenton, Florida. And they’ve all since gone on to reach the highest levels of the European club game.

Pulisic won the UEFA Champions League last year with Chelsea, becoming the first American to appear in the final. Adams played in a Champions League semifinal in 2020 and now stars for Premier League Leeds United. McKennie is in his third season as a starter for Juventus, the most successful team in Italy’s famed Serie A.

As personalities, the three couldn’t be more different. Pulisic can still be painfully shy in public. McKennie has never met a camera he didn’t like. Adams serves as the straight man between them, yet the three most decorated and most important USMNT players are as tight as a knockout match in extra time.

“It’s really interesting to see them interact within the team and among themselves,” Berhalter said.

“There’s so much love and there’s so much, like, annoyance at the same time,” Zimmerman said. “It’s funny to watch Weston try to get under Christian’s skin and him just kind of laugh it off. It’s a really interesting dynamic. They lead so much with their quality on the field.”

How important is Christian Pulisic to team USA?

Stu weighs in on Christian Pulisic and the role he will play for Team USA in the tournament.

Their shared history provides a sense of trust that only old friends have, and it extends beyond the three of them. Adams, Pulisic and two other members of the 2022 World Cup squad — striker Haji Wright and playmaker Luca de la Torre — were teammates on the U.S. under-17 team that competed at the 2015 FIFA U-17 World Cup. Another, defensive midfielder Kellyn Acosta, has played with fellow Texan McKennie since he was 6.

“We all know each other so well that we can talk to each other openly,” McKennie, who was cut from that U-17 World Cup team, said last week. “If I’m doing something wrong, Tyler has no problem holding me accountable for it.”

Adams, McKennie and Pulisic each took different paths to get to this moment. Adams worked his way from the New York Red Bulls academy to the second-tier USL,  and then to MLS, spending three seasons with the Red Bulls first team before moving to RB Leipzig of the German Bundesliga. McKennie also came up through an MLS talent mill with his hometown FC Dallas, but bypassed MLS and turned pro with Bundesliga Schalke instead.

Meantime, Pulisic moved to Germany at 15, working his way through the youth ranks at Borussia Dortmund before becoming an instant hit with the varsity the next year.

“That’s impactful because it gives other players hope,” Berhalter said, “that there’s not one right way to do it.”

FOX Sports Soccer Analyst Stu Holden joins Colin Cowherd on “The Herd” to discuss the impact Christian Pulisic will have on Team USA.

Pulisic is among the handful of holdovers from the 2017 U.S. team that lost 2-1 to Trinidad in the USMNT’s final World Cup qualifier and missed out on the main event. (He scored the Americans’ goal.) Adams and McKennie made their senior debuts the following month in a friendly match in Portugal.

Berhalter took over the program in 2018. He’s seen the trio become men in the interim.

“It’s beautiful to see how they’ve grown over the past four years as people,” the coach told FOX last month.

“Christian is like a flower that has blossomed. As he opened up and you get to see his personality, you understand how special of a person he is, how kind he is, how thoughtful. At first glance, you don’t necessarily get that because he is more guarded — and rightfully so because of everything he’s been through in his career so far.

“Tyler is a consummate professional,” Berhalter continued. “He’s always in line but always pushing a bit. He has this demeanor of being tough, but inside he’s a really sweet person. And Weston is the magnet. He’s the guy that everyone is drawn to. He has this light that shines really bright and everyone is drawn to him. But there’s times when you just need to shut him off because he’s shining a little bit too bright and you need to focus. But he’s also a fierce competitor.”

Berhalter famously sent McKennie home before the USMNT’s second qualifier last year but welcomed him back with open arms the following month. McKennie has been a model citizen since.

[How the USMNT restored its culture]

“My joking around kind of loosens them up a bit in a way they can connect with me,” he said. “When it comes time I have to lay down the foot and tell them, ‘Hey, do this, we need to do that, make sure you’re here, make sure you’re there,’ they’re already comfortable that they can trust me, and that I’ll listen to them.”

For all the trio’s differences, there are plenty of similarities, too.

“They’ve remained true to themselves in what type of people they were from 14-15 years old,” said Richie Williams, their U-17 coach. “They were talented players who were passionate about soccer. They’re technically good. But I think the thing that separates those three is their competitiveness.”

All three are leaders in their own ways, too. Adams is the most obvious. He can be seen talking to teammates and directing them for 90 minutes. McKennie is one of the national team’s most experienced players and knows the responsibility that comes with it. He’s someone even older guys look up to.

“Christian’s had the weight of the world on his shoulders for six or seven years now with the national team,” Zimmerman said. “Watching how he overcomes criticism and adversity is a testament to his love for this country, his love for this team.”

He’s still quiet behind the scenes, but that doesn’t mean he only leads by example. Whenever Pulisic does talk, his words carry weight.

“A lot of those moments you might not see on the field — it might be in meetings we have as players where he can bring his experiences, his passion to light in a smaller conversation behind closed doors,” Zimmerman said. “He’s very mature and thoughtful with what he says, and when he speaks, people listen. He’s earned every bit of that.”

Denied a chance to perform on the World Cup stage four years ago through no fault of his own, Pulisic will get the chance over the next few weeks to finally become a household name in America.

It’s fitting that he’ll take his turn on the biggest stage alongside Adams and McKennie. This is their moment. It’s their team now. And it will stay that way for many years to come.

It’s not just about sex outside marriage: How Indonesia’s new criminal...

News Next Desk - December 8, 2022 0
KONE Elevators India, a fully owned subsidiary of KONE Corporation, a global leader in the elevator and escalator industry, today announced that the Company...
%d bloggers like this: