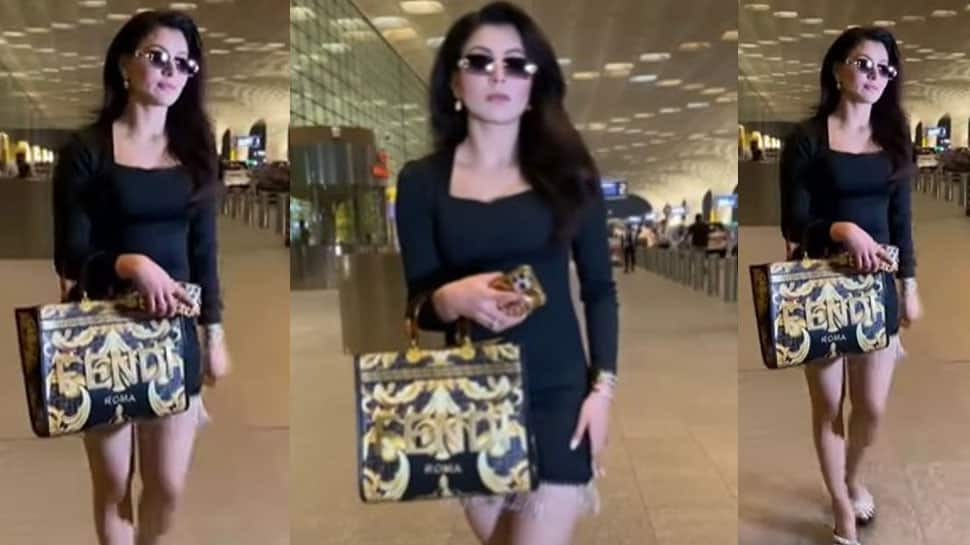 New Delhi: Model-actress Urvashi Rautela is famous of for high fashion looks. She was recently seen wearing a body-hugging, full-sleeved, black iki chic stylish mini dress with a square neckline and silver tassels at the bottom for her airport look. And looks like it costs about Rs 30,000.

Urvashi opted for a gorgeous outfit giving her a chic look as she striked for some candid pictures. The actress paired her look with a Fendi x Versace Gold Baroque & FF Motif Fendace Sunshine Tote Bag worth Rs 5 lakh. Also, not to miss her Chanel bracelet, earrings, and sunglasses to complete the ultra-chic set, with the accessories alone costing Rs 3 lakh – making her full airport look price worth Rs 8.5 lakhs. She happily posed for her admirers and the photographersat the airport.

With this whopping amount, you can easily buy a four-wheeler accomadating your budget, right?

On the work front, Urvashi has recently signed a film with Pushpa 2 producer along with south superstar Chiranjivi in an action entertainer “Waltair Veeerayya”. She will also be seen sharing screen space with actor Ram Pothineni. Urvashi will be seen in ‘Inspector Avinash opposite Randeep Hooda. She is also making her big Hollywood debut along with 365 Days star Michele Morrone, which will be produced by Netflix, Tomasz Mandes, and will be directed by 365 Days director Barbara Bialowas.

The actress is going to play the lead role in a William Shakespeare bilingual thriller ‘Black Rose’ based on the Merchant of Venice, along with the Hindi remake of the superhit ‘Thiruttu Payale 2’. Urvashi will also be seen opposite international superstar Jason Derulo in her next international music single.

News Next Desk - December 5, 2022 0
Machines are known for their precision and speed, but the human touch brings an aspect of quality, sophistication and attentiveness to any task. It...

News Next Desk - December 5, 2022 0
Soha Ali Khan has already tuned into the holiday spirit as she celebrated an early Christmas with her husband Kunal Kemmu and daughter Inaaya...

News Next Desk - December 5, 2022 0
The New Zealand government said it will introduce a law that will require big online digital companies such as Alphabet's Google and Meta...
%d bloggers like this: