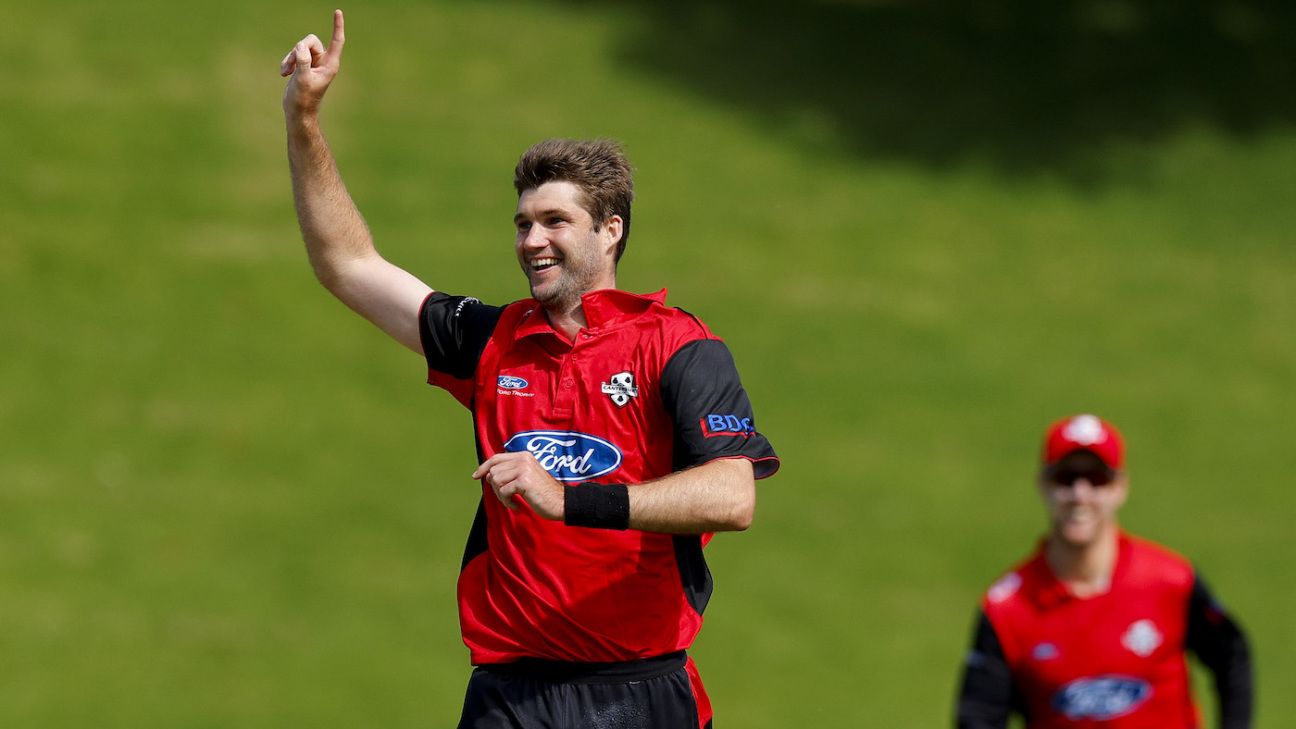 Canterbury allrounder Henry Shipley has earned his maiden call-up to the New Zealand squad for the upcoming ODIs tours to Pakistan and India. Kane Williamson will lead the side in Pakistan, but will not be part of the following ODI series in India.
Head coach Gary Stead, bowling coach Shane Jurgensen and newly appointed Test captain Tim Southee will return home after the Pakistan tour along with Williamson to prepare for the home Test series against England in February 2023.
In the absence of Williamson and Stead, Tom Latham and current batting coach Luke Ronchi will take charge of the ODI squad in India. Ronchi will also act as the head coach for the T20I series in India and will be assisted by Bob Carter, the former New Zealand Women coach, and Paul Wiseman, the former New Zealand spinner who was also recently part of the coaching group of the New Zealand A side that had visited India earlier this year.
Fast bowler Kyle Jamieson, though, continues to be unavailable for selection, as he works his way back from a back injury. Jamieson has not played for New Zealand since the Nottingham Test in June earlier this year.

Batting allrounder Mark Chapman and seamer Jacob Duffy have been included in the squad for only the India tour as New Zealand continue to manage the workloads of their players and staff.

Legspinner Ish Sodhi and Henry Nicholls, who had been omitted for the squad for the home ODI series against India, have both been recalled for the ODIs tours of Pakistan and India. Sodhi will work with Mitchell Santner, Michael Bracewell and Glenn Phillips in the spin attack.

Shipley, 26, is the only new face in the squad. The pace-bowling allrounder can hit the deck with the ball and hit boundaries with the bat lower down the order. His towering frame (1.96 metre) could potentially give New Zealand’s attack a point of difference in the subcontinent.

In November at home, Shipley took career-best List A figures of 6 for 40,including a hat-trick in the Ford Trophy opener for Canterbury against Wellington. It was the the first hat-trick for Canterbury and only fourth overall in 52 years of the tournament.
Shipley continued his strong form in the Ford Trophy and is currently the second-highest wicket-taker in the tournament, with 12 strikes in five games at an economy rate of 4.20. Earlier in last season’s 20-over Super Smash, he had emerged as the top wicket-taker, with 18 scalps in 11 games at an economy rate of 7.25 in Canterbury’s run to the final, where they lost to Northern Districts.

“Henry’s an exciting talent who we’ve had our eye on for a while,” New Zealand selector Gavin Larsen said. “He’s taken his game to another level in the past 12 months, and we’re delighted to see his progression given how valuable genuine all-rounders are in any cricket team.

“It’s encouraging to see players putting their hands up in our domestic competitions and their performances being rewarded with selection for the national team.”

After bagging that Ford Trophy hat-trick, Shipley attributed his recent success to his greater self-confidence. “Probably a bit of confidence over the last couple of years. Been working reasonably hard on a few different things, especially my bowling,” he had said. “Trying to be a bit more effective and I guess and take wickets. And on batting – I’ve always had the self-belief but it’s just biding your time and earning the right to get into the allrounder’s position.”