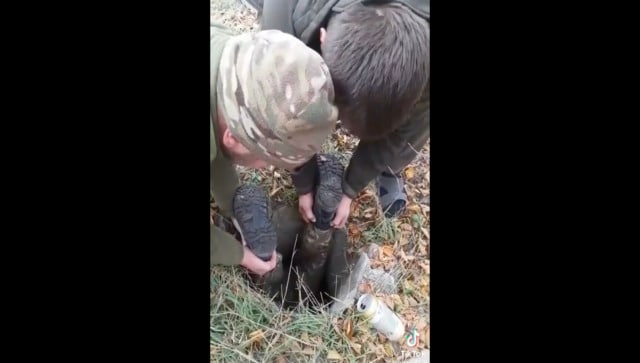 Ukrainian soldiers hold their comrade by his feet as he defends into a pit to rescue a puppy. Videograb: Twitter

The Russia-Ukraine war has been taking a dramatic turn with time. While half of Ukraine’s infrastructure has been damaged amid Russian attacks, on the other hand, the country’s economy has also been devastated. With the war going on for the past several months now, it has also left Russia isolated from the West and has further fuelled economic insecurity across the world. In such a crisis situation, the Ukrainian Army has been staying strong and fighting off its enemies. Soldiers of the Ukrainian forces have not been home in months and are continuously working their part to ensure the safety of the people left homeless and further rescue them from bombarded cities.

The forces have also made efforts to save animals from becoming a victim of the ongoing attacks in Ukrainian cities. One such instance was recently witnessed in a video where a group of soldiers was seen rescuing a dog after it fell into a deep pit. Shared on Twitter by Advisor to the Minister of Internal Affairs of Ukraine, Anton Gerashchenko, the video is going viral and winning hearts on the internet.

Originally posted on TikTok, the clip shows a soldier going down into a pit while some others held his leg to save him from falling. It is seconds after this when the soldier comes up with a small puppy in his hands. Seemingly, the dog mistakenly fell into the pit and couldn’t get out any sooner.

Our Defenders rescued a doggie.

The official while sharing the video also added a caption that read, “Our Defenders rescued a doggie.” Since being shared, the video has grabbed the attention of many. People flooded the comment section with applause for the soldiers and also for the efforts of the Ukrainian forces in such times.

A user wrote, “Now that’s trust in your compatriots”, while another person commented, “I freaked out….they didn’t even have him tied off….no safety line & those 2 gents are STRONG to be able to hold him long enough AND pull him back out….STUNNER EH!”

A third user wrote, “I can’t thank these amazing Defenders enough. Poor little puppy must have been so terrified. Fantastic to see once again that every life matters to Ukrainians.”

I freaked out….they didn’t even have him tied off….no safety line & those 2 gents are STRONG to be able to hold him long enough AND pull him back out….STUNNER EH!🍁🍁🍁🍁

That takes a lot of confidence in your buddies won’t lose their grip.

Blimey!! Well done! What courage it took to do that!

The video has so far grabbed over 50,000 views and amassed several likes and comments.