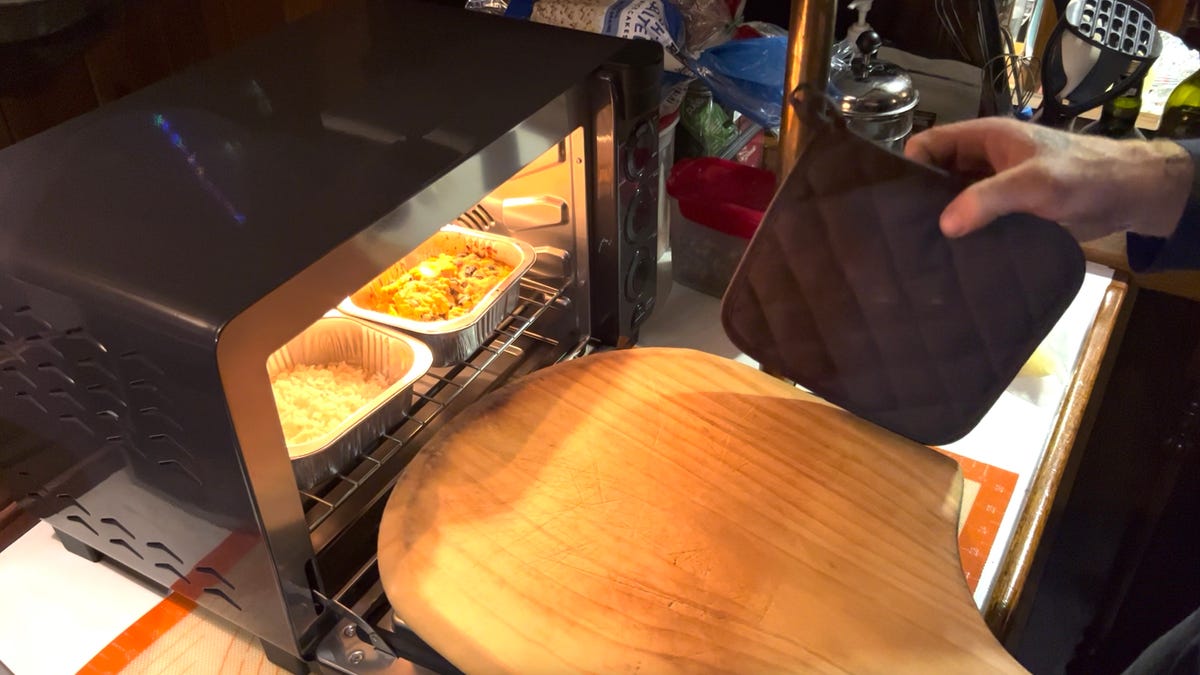 We live on a boat, and we had a quandary. Our oven is small. I mean SMALL. Boat galleys are designed for efficiency and the range and oven are Easy-Bake proportions. Worse, the temperature gauge on the propane oven is all but useless. You may choose between warm and flame-broiled, nothing in between.

The oven can toggle between its cooking modes to produce the best final product.

We had been scoping out toaster ovens as a possible alternative for a large portion of our cooking. We knew we wanted a versatile, multi-mode oven that could handle toast or even a full dinner.

After some research, we settled on the second-generation Tovala Smart Oven. We’ve been using it daily for about six weeks. We also tried Tovala’s subscription meal program, which supplies you with easy-to-assemble meals to cook in the Tovala.

Did it solve our oven problem? Read on to find out.

The oven is really quite sleek. Its soft gray finish sets it apart from the black or stainless steel that’s more common in kitchen appliances. The handle is a polished steel color and there’s a nice wide viewing window that lets you watch your food via the internal light.

Oh, and there are buttons. As in physical buttons. On a smart oven that boasts barcode scanning and recipe intelligence, that’s a really welcome feature. The buttons are small but feel solid and have satisfying clicky feedback when you press them. The control display is intuitive, with the six primary cooking modes arrayed around the top of three circular interfaces. The next circle contains two buttons for adjusting temperature, and the third has two buttons to set the time, both with a digital display in the middle to show the current selection.

Inside, the Tovala has three rack heights to accommodate a standard shelf or the included air-frying basket. A sheet tray and crumb tray are included.

The premise of the Tovala Smart Oven is to make cooking a breeze by combining an intuitive oven and a bunch of digital smarts. The Tovala has six primary cooking modes: toast, bake, broil, steam, reheat, and scan. It also air-frys.

A few of those are self-explanatory (a toaster should toast, what else is there to say?) but others require some unpacking. Does it surprise you that a countertop oven has a steam mode? It surprised us.

When setting up the oven, you add water via a small inlet on the right side of the oven, using the included measuring cup. In addition to steaming food like vegetables, the Tovala Smart Oven can use steam in ways such as adding a steam cycle to the toast function to make the bread crispy on the outside but moist inside.

The scanning function is also a new one for us, although it’s becoming more common on kitchen appliances. You scan a barcode on the packaging of whatever you’re heating up, say a frozen pizza, and if the Tovala recognizes it the oven automatically sets the temperature, mode, and time for best cooking.

Also: How to build a winter emergency kit (and why)

Of course, it wouldn’t be a smart oven if it didn’t connect to Wi-Fi (2.4GHz in this case) and had an app. With the app, among other features, you can set custom multi-mode cook cycles, select from a library of chef’s recipes, order Tovala Meals (Tovala’s meal subscription service), and scan grocery store foods.

Enabling push notifications also allows Tovala to tell you when your food is done and ready to take out of the oven. I first thought that was a little gimmicky, but between keeping the boat afloat and parenting two kiddos, my wife and I are rarely standing by waiting for the oven to ding. The notifications help.

With the Tovala staking out some premium real estate on our counter, the bar was high — we don’t give that space up easily. Adequate isn’t enough: It needed to be time-saving and essential.

Naturally, the first thing I made was toast. I selected the toast mode, chose my toast level (1-5), and pressed start. Sometimes sophistication and complexity in household products come at the cost of simplicity. Not so with the Tovala Smart Oven, the core functions of which are very intuitive.

Next came the Impossible Chicken Nuggets. When we cook the nuggets in our boat oven, they come out one of two ways: underdone and mushy in the middle, or overcooked and too hard. (Our kids being ravenous monsters, this hasn’t slowed them down too much.) After loading the nuggets onto the air fryer tray, we pressed scan and held the barcode on the packaging up to the Tovala’s small eye. With a musical chime, the oven did a little swirl of its digital displays and chose a cooking mode.

Interestingly, the time and temperature on the package differed from what the oven chose. I thought of grumbly kids and started to second-guess it. But a reviewer’s oath is sacred, so I dutifully pressed start.

How’d the nuggets turn out? The Tovala nailed it. Likely one of the reasons the packaged cooking instructions differed from the Tovala’s is that the oven can toggle between its cooking modes to produce the best final product. Where our boat oven just threw heat at the nuggets, the Tovala baked them to perfection, crisp on the outside and piping hot inside.

The difference was pronounced, and we were impressed. But what about bigger meals?

This is where the oven really shines. Remember those multiple cooking modes? Tovala gets downright sophisticated in deploying them to cook multiple ingredients simultaneously.

That premise underlies Tovala Meals. Like other fresh food subscription services, its meals arrive in a chilled shipping box. Each contains cooking trays, ingredients, and simple instructions for preparing and assembling the meal.

Also: The best food and drink subscriptions to give as gifts

There was one problem: the excess packaging inevitable for an at-home food delivery service, and making single-serve meals instead of buying in bulk. With Tovala Meals, each component is plastic-wrapped and sauces come in individual sauce packets. At the end of the meal, I found myself with a dispiriting amount of discardable material.

The egg sandwiches were simple to prepare, with the eggs and rolls heating separately in the oven at the same time. Not long after, I got a notification on my phone that the food was ready.

How was it? Pretty good. I would have liked it more with some veggies, but the ingredients tasted fresh and everything was cooked to perfection.

That evening the fam shared the shells and burrito bowls. Call it fusion or call it laziness. My daughter in particular loved the shells, which were lightly toasted on the outside just like my mother-in-law makes. The burrito bowls were great, and the whole process of assembly and cooking took significantly less time than a home-cooked meal from scratch.

If not for the packaging, this would be a long-term solution for us. But as a family of four, it’s unjustifiable for us to fill a trash can every day if it’s avoidable. If Tovala came up with some bulk packaging options or committed to reducing waste in its single-serve plan, we’d gladly reconsider. It was all very tasty.

And the oven performed great. We made cookies the next night from scratch and found from one of the included meal cards that Tovala has a helpful cookie mode. We put the dough on the parchment-lined tray and used the Tovala app to start the cookie mode. Minutes later we had perfectly baked chocolate chip cookies, something that was elusive with our previous blowtorch oven.

You can’t go wrong with the Tovala Smart Oven. It’s a breeze to use and provides quick cooking of daily essentials, from toast and quesadillas to more complex meals and desserts. It handles veggies really well, leaving them crisp but cooked, and it’s great for eggs.

The Tovala Meals plan may be right for you — we’d give it a second look if it involved less packaging, but until then we’ll use the oven for homemade meals. I’ve got something cooking right now, as a matter of fact. In just a moment, the app is going to tell me to take it out and enjoy, which I plan on doing.

Packed with smarts, June Oven has a full 12 cooking modes and packs a technological punch. But there’s a higher price tag on all that tech.

This Breville brings you 10 smart cooking modes and an internal light from the folks who make some of the best countertop air-frying gadgets available.

Billed as the Tesla of ovens, this oven uses a novel technology to reach up to 900 degrees incredibly quickly.

The 5 best portable power stations of 2023