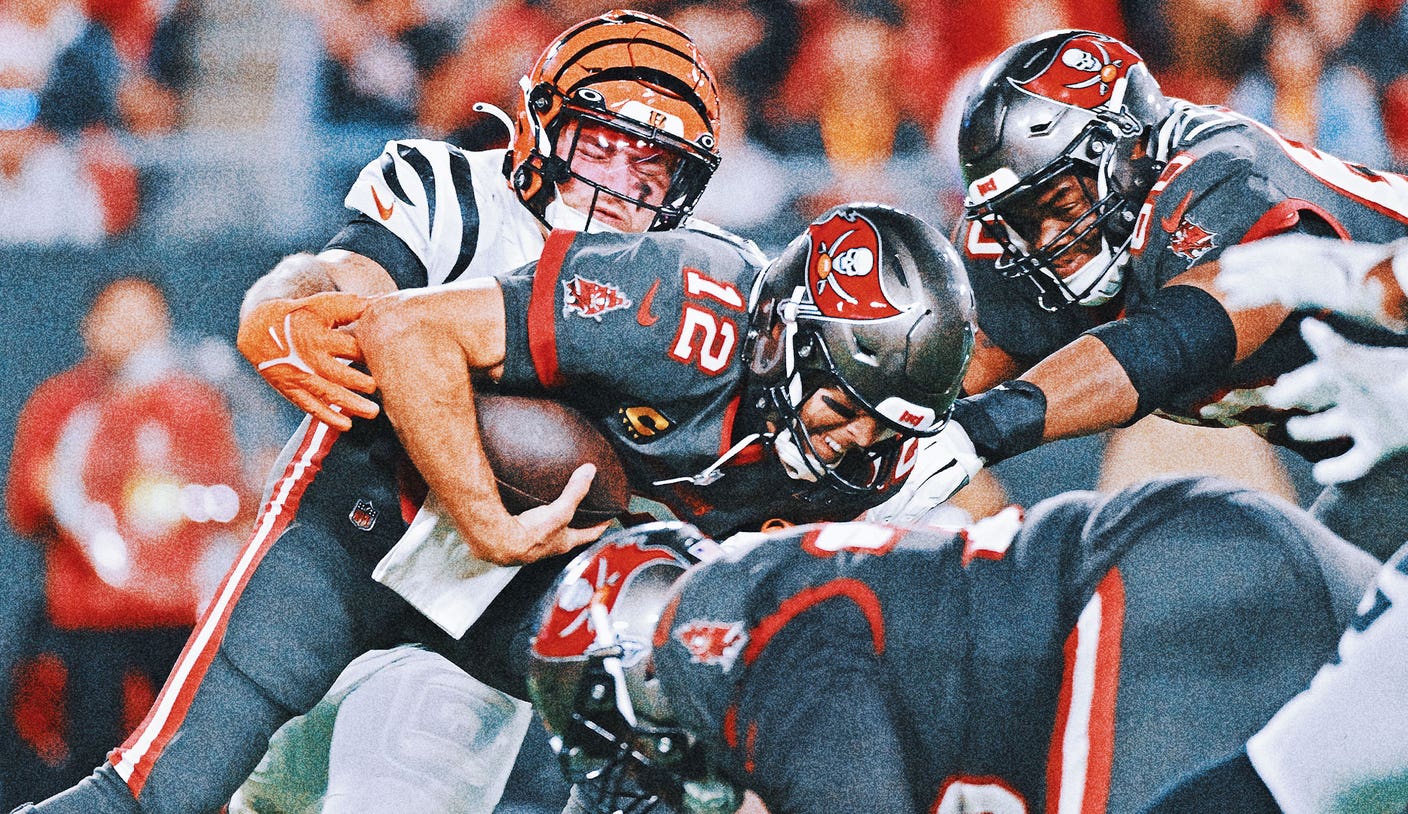 TAMPA, Fla. — This wasn’t the kind of history Tom Brady came out of retirement to make.

Before Sunday, the Buccaneers quarterback had been 89-0 in his career in home games where he leads by 17 points or more at any point in the game. Just three losses in 23 NFL seasons, period, once he had such a big cushion.

And somehow the Bucs went from leading the Bengals 17-0 just before halftime — hey, this is how they’re capable of playing again — to Brady committing four turnovers in a span of 10 offensive plays, helping the Bengals to a stunning 34-23 comeback victory.

Up 14 at the half and lose by 11 points or more? That had happened just four times to any NFL team since 1987, just under 35 years, and the Bucs pulled it off Sunday, finding a new and even more confounding way to lose.

A week earlier, they trailed 28-0 at the half, losing 35-7 at the 49ers. They’ve lost twice — to the Packers and Steelers — on missed two-point conversions. They lost on a one-handed fourth-down touchdown catch in the final minute to set up an overtime loss.

Despite all these losses — eight now, the most ever for a team with Brady as starting quarterback — the Bucs have the odd consolation of still being in first place in the NFC South, one game ahead of three 5-9 teams and still very much in control of their playoff destiny.

“All you can do is fight,” coach Todd Bowles said after the game. “You can fight, you can play smarter, you can coach smarter, and we have to keep fighting. We understand that what we’re doing is not good enough, by far. It’s not even close to good enough, and we have three games left to save our season.”

The Bucs play on Christmas at Arizona, which just lost quarterback Kyler Murray to a season-ending knee injury, and is 4-10 and has lost four in a row and six of seven. Win there and at home on New Year’s Day against Carolina (which beat them 20-3 in Charlotte this season) and Tampa Bay will clinch back-to-back division titles for the first time in their history, earning a home playoff game.

Probabilities aside, that seems hard to imagine, given how the Bucs played in the second half Sunday, up 17-3 and in complete control of the game.

Facing a fourth-and-1 from their 26-yard line, Bowles called for a fake punt, but as the ball was snapped directly to backup running back Gio Bernard, he didn’t seem to expect it, and the ball bounced off the side of his helmet and he was tackled for a turnover on downs. Even then, the Bucs defense held the Bengals to just a field goal and kept a 17-6 lead.

Then a buzzsaw of four Brady turnovers in four drives, leading to three Bengals touchdowns and a 27-17 lead. Brady had a pass intercepted by Tre Flowers, fumbled on a sack and then fumbled on a handoff to Leonard Fournette. The Bengals only had to go 31, 13 and 39 yards for their touchdowns, this after getting the ball at the Bucs’ 13 off the fake punt. If there were any chance of bouncing back for a comeback, Brady threw another interception on the next drive, for four turnovers in a span of 10 offensive plays.

“We’re pissed off,” Bowles said of his locker room after the game. “It’s the same old song. It’s Bucs vs. Bucs. We play a good first half, and the second half, we come out and we shoot ourselves in the foot, either by turnovers or penalties or field position on special teams. It’s a tale of two halves, and the half we played in the second half was Bucs vs. Bucs.”

That has been the storyline all season, a team good enough for Brady to come out of retirement for, yet unable to score anywhere nearly as consistently as his first two seasons in Tampa, getting 30 points a game. The 23 points scored by the Bucs on Sunday — including six on a meaningless touchdown pass with 49 seconds left — marked the second-highest scoring total this season, behind a 41-31 loss to the Chiefs that also included a tack-on touchdown in the final minutes.

The defense continues to be unable to create takeaways with any regularity. They had one Sunday, intercepting a Joe Burrow pass, but that’s just 13 takeaways total in 14 games — in the entire NFL, only the Raiders (11) and Saints (10) have forced fewer.

The Bucs have just three games left, and could even back into the playoffs as a 7-10 division champ, but it’s been so rare that they’ve played like a first-place team, that they’ve played like a winning team from start to finish, that even if they got to the playoffs, there’s little confidence in what the Bucs could do, even with a seven-time Super Bowl champion as their quarterback.

It’s the first time in Brady’s career he’s had multiple interceptions and multiple lost fumbles in the same game. His ability to avoid turnovers was perhaps what he’d done best as a 45-year-old, but even that has given way with six turnovers in the last two losses.

The Bucs are a team with a losing record, but reasonably, all they have to do is beat two teams that have losing records in the next three weeks, and they’ll be a playoff team, if an underwhelming one. Tampa Bay does not have much time to turn their season around, but that remains their goal, however frustrating that pursuit continues to be for them.

“We have a lot of toughness,” Bowles said. “We have to deal with adversity better. We have to stop the miscues and the Bucs vs. Bucs. We understand that. We talk about it, we preach it, we practice it, we take ownership of it, and we’ll fight to stop it.”

Greg Auman is FOX Sports’ NFC South reporter, covering the Buccaneers, Falcons, Panthers and Saints. He is in his 10th season covering the Bucs and the NFL full-time, having spent time at the Tampa Bay Times and The Athletic. You can follow him on Twitter at @gregauman.