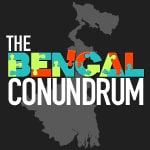 It has been a year since unprecedented violence took place in West Bengal after the Assembly election results were announced. Why Bengal has been suffering violence (both West Bengal and Bangladesh)? What was the original demographic composition of Bengal and how it has changed; and how this has affected the socio-political milieu in this region? This multi-part series would attempt to trace the origin of socio-political trends in the larger Bengal region (state of West Bengal and Bangladesh) over the last several decades. These trends are related to the evolution of Bengal over the last 4000 years. It’s a long journey and unfortunately most part of it has been forgotten.

The history of medieval Bengal, as we have all been taught, has propagated this myth that the Islamic invaders were full of bravery and Hindu rulers were no match for them. The colonial and Marxist historians as well as contemporary Muslim chroniclers on whom Indian and global academia of our times rely heavily for historical evidence have all underplayed the importance of the Hindu resistance to Islamic invaders.

In light of the historical evidence, which seems to have been deliberately ignored, let us take a look at the myths of ‘bravery of Islamic invaders’ and ‘meek submission of Hindu kings’ in Bengal during the medieval period.

ALSO READ | The Bengal Conundrum: How Bengal, a Land of Mighty Rulers, Was Born

This ‘myth building’ started with the invasion of Muhammad Bakhtiyar Khilji in 1201. It is often said that he conquered the whole of Bengal with only 18 warriors with him! When Bakhtiyar Khilji attacked Nadia or Nabadwip in 1201, he had a cavalry of 10,000. Nadia was a holy town of Hindus and it was ruled by Lakshmansena of the Sena dynasty. Being a holy town, there were no fortifications, so Khilji first entered Nadia with 18 horsemen as a forward party and started killing hapless and old pilgrims. He was followed by the cavalry which was basically a bunch of Turk and Afghan mercenaries who under Khilji were focused on attacking and looting the rich towns and cities. During these attacks they maimed, raped and brutalised the common people.

In fact, there is an interesting story that links the coinage of the name ‘Bihar’ with Khilji’s barbarism. When Khilji started his ‘loot and scoot’ campaign venturing beyond his small estate of Mirzapur (in present day Uttar Pradesh) awarded to him in 1198, he started raiding the region what we know as ‘Bihar’ today in search of wealth. During one of these campaigns, he entered a Buddhist monastery and killed all the monks there. Some historians have opined that Khilji mistook this monastery as a fortress and the monks as ‘shaven soldiers’. The monastery was known as ‘Vihar’. After this incident, the mercenaries started calling this whole region ‘Bihar’ while they were actually referring to ‘Vihar’! Khilji’s impact was minimal in Bengal and it isn’t that whole of Bengal was captured by his army. Lakshmansena of the Sena dynasty continued to rule as a great Hindu King in Bengal even after this treacherous attack on a defenceless Hindu holy place by Khilji.

Tabaqat-i-Nasiri, a medieval text (written in Persian) by Minhaj-i-Siraj, is considered to be an important source book for the reconstruction of the initial years of Muslim rule in Bengal. The history of the first 50 years of Muslim rule in Bengal is found only in this text. Siraj was a courtier who exaggerated the exploits of Islamic invaders of Bengal but even he was compelled to describe Lakshmansena as a great king. While this great Hindu king died in 1206 AD, his two sons Bishwarup Sen and Keshav Sen ruled in succession in Bengal carrying forward the legacy of their great father.

‘According to Minhaj, Ghiyas-ud-din Iwaz, the Sultan of Lakhnaoti (in Bengal), made an abortive attempt in 1226 to conquer Banga (a major kingdom of Bengal). Perhaps this invasion was foiled by Bishwarup Sen. Keshav Sen also claimed victory in his inscription over invaders from the West possibly Malik Saifuddin (AD 1231-33) of Gaur, who sent an expedition to Banga … Minhaj also informs us that Sens occupied the throne of Banga up to 1245 AD.” (Nitish Sengupta, Land of Two Rivers, Pp 59-60)

Senas were followed by the Deva dynasty and historical evidence (as mentioned in Tarikh-i-Mubarak Shahi, a chronicle of Delhi Sultanate period) shows that Danuja Madhav Dasratha Deva of the Deva dynasty entered into a treaty with Balban, Sultan of Delhi, on equal terms. An inscription also showed that he had recaptured the kingdom of Gaur.

Incidentally Khilji and his mercenaries met soldiers who were more than their match as they ventured into the Kingdom of Kamrup (modern Assam but largely part of the ancient Bengal region). As Khilji tried to plunder and brutalise, the tribal warriors of the Tibet region and warriors of Kamrup cut down Khilji’s army into pieces. He somehow made a return back to Devkot with less than 100 men. There he was assassinated by Ali Mardan in 1206 in a power struggle which was the hallmark of Islamic rule in India.

When we talk about Bengal in the medieval period, it is important to recall the valour of Hindu kings and chieftains of the Ganga dynasty as well as those in Kamrup. Ganga dynasty ruled the region which we today know as ‘Odisha’. Under the great King Anangabhima III, Vishnu, a Jajpur feudatory of the king, defeated Sultan Ghiyas-ud-din Khilji who ruled parts of Bengal from 1213-1227. According to noted historian Jadunath Sarkar (The History of Bengal, Vol II, Pp22), “The Chattesvara inscription claims success for the Orissa general Vishnu in his war with the Moon of the Yavana kingdom (undoubtedly alluding to Sultan Ghiyas-ud-din Khilji) … performed heroic deeds that baffle description… .”

During the second half of the 13th century when Sultan Mughis-ud-din ventured into Kamrup with great arrogance, the army of Kamrup kingdom slaughtered the Turkish invaders after surrounding them in the jungles. Sultan Mughis-ud-din was killed and whatever was left of his army surrendered to the King of Kamrup.

Sarkar says (pp54), “The Kamrup disaster broke the spell of the invincibility of Turkish arms with the tribes of Koch and Mech (these were two prime tribes of Kamrup), and started them on a new career of political greatness that affected the history of Medieval Bengal for the next three centuries.”

Sarkar aptly sums up the ‘Hindu resistance to Islamic invaders’ in Bengal (pp29), “Outside the home-territory of the days of Muhammad Bakhtiyar i.e. the tract between the Kosi on the west and perhaps a little beyond the Punarbhava in the east, Devkot on the north and the Ganges in the south – there were powerful Hindu Rajahs strewn all over the country who followed the policy of ‘vettasi-vritti’ (i.e. to bend like the supple cane under pressure of the tide and become straight again) with regard to the Muslim rulers of Lakhanwati (in Bengal) … Neither Bengal, nor in fact any other part of India, was conquered by a few cavalry dashes of the Turks as the unenlightened impression goes.”

ALSO READ | The Bengal Conundrum: How Hindu Kings of Bengal Evolved a Perfect Model of Governance

You can read other articles in The Bengal Conundrum series here.

The writer, an author and columnist, has written several books. One of his latest books is ‘The Forgotten History of India’. The views expressed in this article are those of the writer and do not represent the stand of this publication.

Opinion | Yet Another Storm in A Teacup: How The Hijab Row in India Is A Manufactured Controversy