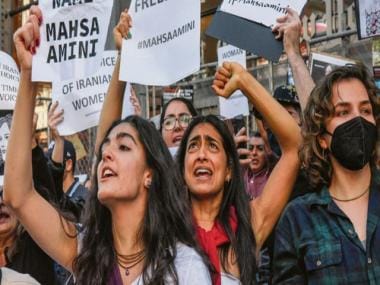 After the Islamic Revolution of 1979, the new fundamentalist government of Iran made it mandatory for women to don the hijab and wear loose-fitted clothes. Did women in Iran not wear the hijab prior to this? Yes, of course they did, but it had largely been a matter of personal choice. Some did, and some did not.

In fact, women could even wear bikinis to the beach and mini-skirts on the streets; they could choose what to wear, and they had the freedom to do so. After coming to power the first thing that the fundamentalists did was snatch away women’s personal liberties. Wherever Islamic fundamentalists seize power, be it a state or a nation, women’s rights and freedoms are inevitably the first casualties. Women are reduced to sexual objects, slaves to men, and means of procreation.

In the Indian subcontinent, there are efforts underway to enforce the hijab on women. There is a world of difference between how this subcontinent had been 50 years ago and how it is now, as more and more women’s bodies continue to be wrapped up in black cloth. But why must we go back half a century? Even two or three decades ago were people of this subcontinent not religious? There were surely just as many pious people then as there are now. Then what has happened that such radical change has been wrought upon women’s attires? Why must women’s clothes continue to bear the marks of their religious identities? They must because Islam as it stands now is no longer just a religion, it’s political.

In the mosques of Bangladesh and Pakistan, in madrassas and waz mehfils, the Islam that is now taught is no longer a faith but a political doctrine. A doctrine of power. A power that fundamentalists desire, and their desires have taken flight and assumed the forms of women’s burqas, niqabs, hijabs and full-sleeved tunics and blouses. Fundamentalists now go around saying that the hijab is a ‘choice’. The more they acquire power, or the more they gain control over those in power, the more they will shift from choice to compulsion. Just how it happened in Iran.

There may be major differences between Shias and Sunnis but there are hardly any contradictions in their fundamentalist nature, with their common target being women. They wish to destroy women, interrupt their education, they do not wish to allow them self-reliance or a life of self-respect. As if women are condemned creatures of hell, nests of evil, and so they must cover themselves up at all times. Women cannot be in public with their bodies visible, they must be hidden away in a sack. Women’s hair does not deserve air and sunlight, they must keep their hair covered because it causes sexual arousal in men. The same goes for their bare arms and legs. The reasons that used to be furnished in the seventh century in order to keep women covered up are still being bandied about in our scientifically advanced civilised twenty-first-century world for much the same reasons.

The more the conservatives force women into donning the hijab, by hook or crook, the bigger the social victory for the forces against women. This is because such social victories pave the way for later political ones, where women are reduced to being stepping stones for the political gains of the fundamentalists. These political gains make it easier for them to ruin the country, do away with secular ideals, persecute non-Muslim minorities and put an end to women’s education, freedom and dreams of self-reliance once and for all. We have all been witness to all that has happened, and continues to happen, in places like Iran, Afghanistan and Saudi Arabia.

‘Allah has gifted women with hair; to keep it hidden is to insult Him. If hair had been the problem then He would have created women without it. Finding faults in the parts of one’s body is akin to finding faults with Allah’s creation. Worshipping the creation is as good as worshiping the Creator.’ A deeply religious person was telling me this the other day. There aren’t many such people left today; most are politically religious these days. The sermons that the clerics yell out in mehfils are less about faith and more about how that faith can be used politically. Faith does not require sermons and observance depends on the desires and beliefs of the person involved. If religion does not acknowledge this basic freedom of individuals then it is no longer about faith.

Women in Iran have been resisting hijab laws for many years. A couple of years ago a girl got up on a utility box beside the road, took off her white headscarf, attached it to a stick and waved it at the people on that busy street. After the photo went viral many women from other Iranian cities took up the same form of protest, by taking off their headscarves and waving them while standing on public utility boxes. Some even managed to climb the minarets of mosques to do this. These actions were their ways of protesting the mandatory hijab laws.

Through these acts of rebellion they wished to make it clear that the hijab was only for those who wished to wear it and not for those who didn’t. But the fanatical state is not willing to give women the element of choice. They have arrested the protesting women, tortured them and incarcerated them. The last such incident was the case of Mahsa Amini, a 22-year-old girl who the morality police had found to have flouted the strict laws because of the reduced length of her headscarf. So they arrested her and beat her to death.

Since this incident, thousands of Iranian men and women have taken to the streets in protest and have become vocal against these draconian laws. Conscientious people from around the globe have expressed their solidarity with these anti-hijab protests. With their lives on the line scores of Iranian women have taken their hijabs off and flung them in the air, or set them on fire in public, while some have chopped off their long hair in protest. Many such protesters have been killed and many have been arrested.

Those Muslims who have been speaking on behalf of the hijab must take note of these Iranian women. Even the smallest of slips in the hijab or even a visible lock of hair results in arrest, police brutality, penalties and even jail time. The fundamentalist wave that is sweeping across Bangladesh and Pakistan at the moment, and the way women themselves are facilitating such trends by donning the hijab, it won’t be long that these nations too face a situation much like Iran. Fanatics used to force women in madrassas or faith-based Islamic schools to wear hijabs and burqas, now they are adamant about doing the same with women studying in colleges etc.

Dhaka University has been a centre for human rights movements for many decades. If such a well-known secular institution, a space of progressive students’ movements, can be given a particular religious colour then it will surely be considered a huge victory for political Islam. Forcing all women to don the hijab is part of a vast, fundamentalist plot but before such a plot could be successful the members of the Bangladesh women’s football team have dealt it a severe blow by playing and winning the SAFF Championship without wearing hijabs and with their arms and legs uncovered. They have made the country proud in the process, not something that any of the fanatics can ever claim to have achieved. It is therefore the duty of the government to value such talented women instead of pandering to a bunch of misogynous fundamentalists who are opposed to all ideas of freedom of speech and human rights.

For it is in these women that the wealth of a nation resides. Not even half the amount of money that is spent on male footballers is spent on women. However, what we must remember is that the future of humanity rests solely on women. Instead of persecuting them, confining them or hiding them away and compromising their independence and rights, they should be allowed to grow and flourish spontaneously. This will not only ensure their intrinsic development but also guarantee the fortunes of society and the state. The greatest impediment to women’s progress is the evil nexus of religion and politics and it is the responsibility of each progressive citizen, and above all the State, to ensure the total removal of all such obstacles.

The writer is a renowned author, a secular humanist and a feminist. Views expressed are personal.