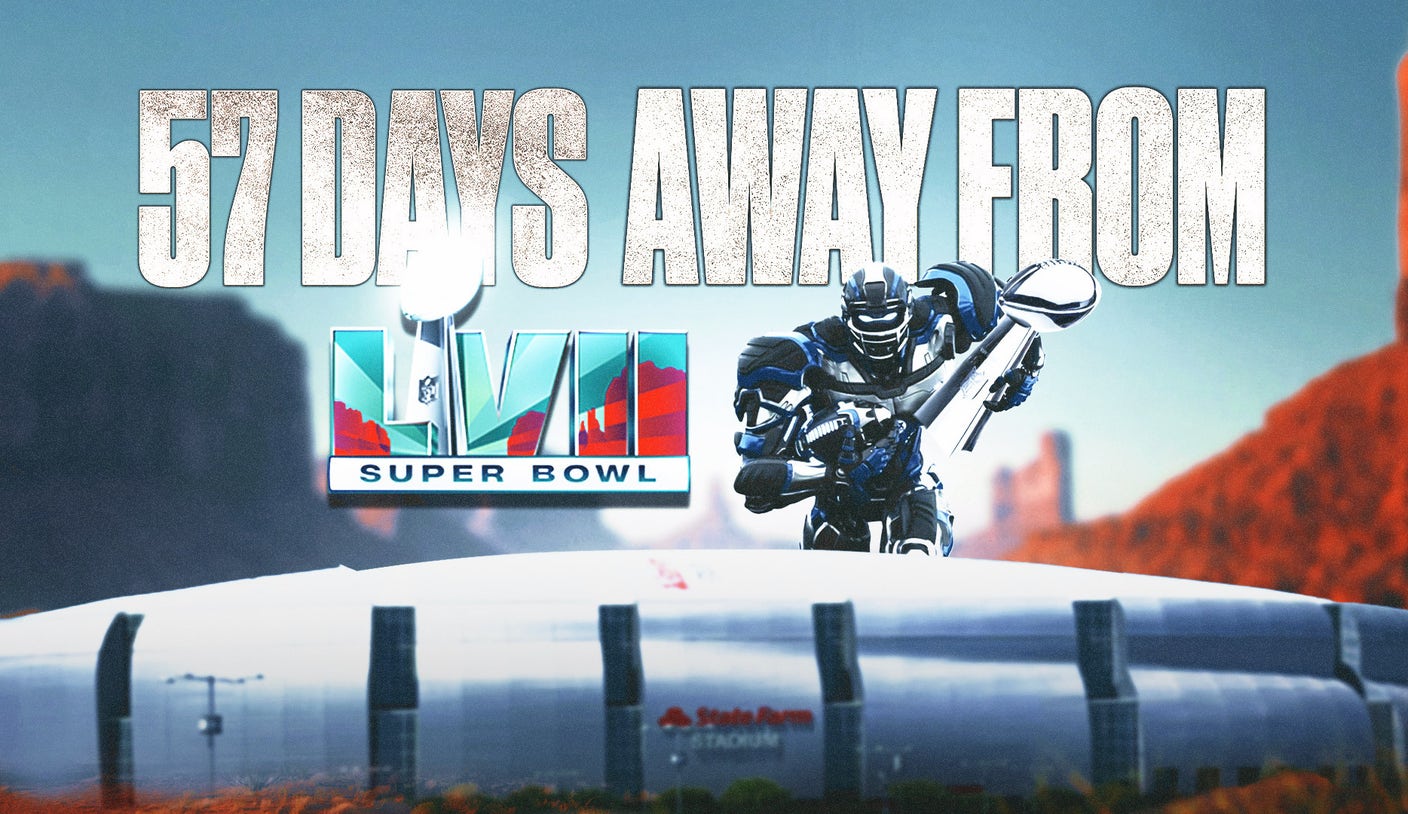 There are 29 NFL teams still technically alive in the chase for a Super Bowl championship, including maybe 18 that have a realistic shot of at least making a real run. But as the NFL heads into Week 15 that wide field is starting to narrow.

And with just 57 days until Super Bowl LVII, time is starting to run out.

The NFL is now squarely in the stretch run of the regular season and the postseason tournament is imminent, with teams across the nation starting setting their sight on football’s biggest game. Super Bowl LVII will take place on Feb. 12, 2023 at State Farm Stadium in Glendale, Ariz., with more than 110 million people around the world expected to tune in to the broadcast on FOX.

It will be the fourth Super Bowl in Arizona, and the third at that stadium. And with the defending champion Los Angeles Rams (4-9) on the brink of elimination, it almost certainly will be the 18th straight Super Bowl played without a repeat champion — the longest stretch without back-to-back winners in the 57-year history of the game.

What other Super storylines will there be? That’ll be sorted out over the next 57 days. For now, here’s a look at the top 15 contenders to reach Super Bowl LVII and the biggest question each of them will have to answer between now and then:

Is their run defense up to the challenge? The only flaw they’ve shown all season long has occasionally been their inability to stop the run. They have lapses in tackling at times and the teams that have come closest to beating them — including the one that did — stayed in the game with a strong rushing attack. They are outstanding in every other phase of the game. If they stop the run, they might be impossible to beat.

Eagles clinch playoff spot, but Jalen Hurts has NOT locked up the MVP just yet

Nick Wright weighs in on the MVP race and explains Jalen Hurts has played great to this point but believes Patrick Mahomes has had a better season.

Can they hold on to the football? Patrick Mahomes is playing like an MVP and he’s got more than enough offensive talent around him. But they are suddenly a turnover-plagued team. Their minus-4 turnover differential puts them near the bottom of the NFL. They’ve given the ball away 19 times, including on 11 Mahomes’ interceptions. They won’t get away with that against better teams.

Will Dak Prescott prove to be a championship-caliber quarterback? He’s been generally terrific since returning from a thumb injury, and he’s turned the offense into a juggernaut. And with a strong, two-pronged rushing attack and a stellar defense, the Cowboys have no weak link. But Prescott has been oddly interception prone, with five in his last three games and seven in his last five. That can’t happen in the playoffs against teams that will make them pay.

David Helman discusses how different this year’s Cowboys squad is compared to previous playoff contending ones.

Is Josh Allen OK? The Bills QB looked like an MVP candidate through the first half of the season. But ever since he sprained his elbow while being battered in a loss to the Jets in Week 9, he hasn’t looked quite the same. He’s still good, and better than most, but neither he nor the Bills offense have been as explosive as they had been. They’ll need to find their old form to get through a loaded AFC.

Can they keep QB Joe Burrow upright? It looks like the answer is “Yes.” He’s been sacked 35 times this season — fourth most in the NFL — but only six times in the last five games. It’s no coincidence the Bengals have won all five while Burrow has averaged 271.2 yards and thrown 10 touchdowns with just three interceptions. They are clicking in every phase right now. If Burrow gets time to throw, their offense is as dangerous as any in the league.

Is their defense good enough to win a championship? It might be, and it’s going to have to be now that quarterback Jimmy Garoppolo is out for the season (probably) with a broken foot, leaving the offense in Brock Purdy‘s hands. The 49ers are first in total defense (286.8 yards per game), first in scoring defense (15.2), second in interceptions (14) and eighth in sacks (36). Purdy has played well and the running game is strong, but it’s the defense that will have to carry this team.

Can Brock Purdy carry the 49ers to a Super Bowl?

Can their defense stop anyone through the air? The NFL’s worst defense (overall and passing) has given up an average of 335.6 passing yards over the last five games. It’s no wonder they’re the first 10-3 team ever to be outscored by their opponents. They did beat the Bills in an overtime shootout, but losing to the Eagles and Cowboys by a combined score of 64-10 is a warning that their pass defense could be a major problem, even in the NFC.

Can they give Tua Tagovailoa some run support? They haven’t so far. In fact, they’ve had 100 yards rushing in only four games all season. That has put enormous pressure on their quarterback, who has been outstanding (3,004 yards, 22 touchdowns, 5 interceptions in 11 games) and has the most explosive receiver in the NFL (Tyreek Hill, 100-1,460-6). But it could be rough for a one-dimensional team in the AFC playoffs.

Tyreek Hill explains why he left the Chiefs for Dolphins

Tyreek Hill explains his departure from the Kansas City Chiefs and talks about a potential playoff matchup vs. his former team.

Will Lamar Jackson be healthy enough to play like Lamar Jackson? For the first three weeks of the season, he was the best quarterback in the NFL, with 10 touchdown passes and two interceptions. In the nine games since, he’s thrown seven touchdown passes with five interceptions. Now he’s out with a sprained knee. He’s expected back before the end of the season, but if he doesn’t play like his old self, the Ravens won’t go far.

Are they healthy enough to survive the playoffs? No legitimate contender has been more battered by injuries this season, including to quarterback Justin Herbert, receivers Mike Williams and Keenan Allen, tackles Rashawn Slater and Trey Pipkins, tight end Gerald Everett, linebacker Joey Bosa, and more. They’re starting to get healthy, but their depth remains fragile. They are still without some key pieces, but time will tell if they have enough.

Can Taylor Heinicke avoid the big mistake in the big spot? There’s no doubt he’s found some magic after taking over at quarterback from Carson Wentz. And so far, he’s even managed to mostly avoid catastrophe, with only five interceptions in his first seven starts. But he plays on the edge and can be wildly inaccurate at times. He’s got a gunslinger style that can be an asset … until it’s not.

Washington Commanders quarterback Taylor Heinicke joins The Herd to shed light on his journey from the XFL to the NFL and what it took to get where he is today.

Is Derrick Henry enough to carry the offense? King Henry is having a spectacular season with 1,199 rushing yards and 11 touchdowns through 13 games. But he’s accounted for more than 42 percent of their touchdowns and just under 40 percent of their total yards. Ryan Tannehill is a mediocre quarterback with questionable receivers. For the Titans, it’s Henry or bust.

They found a quarterback, but do they have a good enough defense? The revival of QB Geno Smith has been the surprise of the season, if not the decade, in the NFL. But as good as he’s been — eight games with more than 250 yards passing, multiple touchdown passes in 11 of 14 games — he’s getting no help from the defense. The Seahawks are giving up 27 points and 404.6 yards per game during their recent 1-4 slide.

Does Tom Brady have enough left to carry another team to a title? He might have to, because the Bucs are the worst rushing team in the NFL. They don’t even have 1,000 total yards through 13 games. Six individual running backs have more than Tampa Bay’s 948 total yards. If that doesn’t pick up, it will put a lot of pressure on the 45-year-old Brady, who’ll have to turn it on in the postseason — perhaps for the final time.

If the cleat fits: Why Raiders, 49ers are a good fit for Tom Brady

Colin Cowherd shares which NFL teams would be the best fit for Tom Brady, who will could leave the Tampa Bay Bucs after this season.

How are they going to be able to move the football? The running game was once their strength, but Saquon Barkley has been in a slump the past month. They average only 180 passing yards per game and have one of the NFL’s worst receiving corps. Their most reliable play has been when quarterback Daniel Jones runs (usually for his life), but that hardly seems like enough to carry a team on the road in the playoffs.