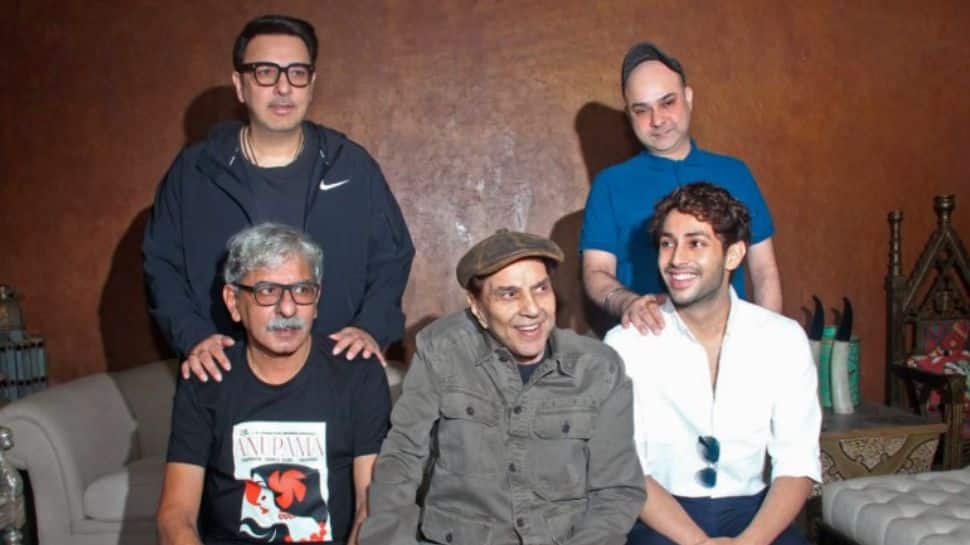 Mumbai: On the occasion of Dharmendra`s birthday, ace filmmaker Sriram Raghavan announced his collaboration with the legendary actor. Sriram is coming up with a war drama titled `Ikkis`, which will be headlined by none other than Dharmendra.

Surprisingly, Dharmendra will share screen space with megastar Amitabh Bachchan`s grandson Agastya Nanda in the film. ‘Ikkis’ is touted to be a war drama based on the life of Second Lieutenant Arun Khetarpal. He was awarded Param Vir Chakra posthumously and lived an exemplary life. Being made under Dinesh Vijan`s Maddock Films, `Ikkis` will go on floors in 2023.

Apart from `Ikkis`, Agastya will also be seen in filmmaker Zoya Akhtar`s `The Archies`, which is a fresh take on the iconic gang of The Archies and promises to match the youthful energy, hope and excitement of the 60s. It also stars Mihir Ahuja, Dot, Khushi Kapoor, Suhana Khan, Yuvraj Menda, Agastya Nanda and Vedang Raina. It is backed by Tiger Baby, Graphic India and Archie Comics and will release next year.

Veteran actor Dharmendra who is celebrating his 87th birthday today has delivered remarkable performances in films like `Sholay`, `Pratiggya`, `The Burning Train` and many more. He will be next seen in Karan Johar`s upcoming romantic comedy film `Rocky aur Rani ki Prem Kahani` alongside Ranveer Singh, Alia Bhatt, Jaya Bachchan, and Shabana Azmi. The film is all set to hit the theatres on April 28, 2023. Apart from that, he also has director Anil Sharma`s next `Apne 2` opposite Sunny Deol, Bobby Deol, and Karan Deol.

No Security Officers With Us: Congress Alleges ‘Serious’ Lapse Amid Bharat Jodo Yatra In J&K

No Security Officers With Us: Congress Alleges ‘Serious’ Lapse Amid Bharat...

News Next Desk - January 27, 2023 0
New Delhi: The Congress Party on Friday alleged that there was a serious security lapse amid the Rahul Gandhi-led Bharat Jodo Yatra today at...

The case of Tyre Nichols, a Black man killed by cops...