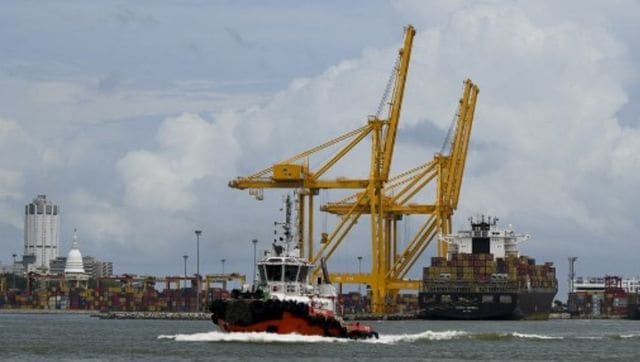 A container vessel is being offloaded at the East Terminal of the Colombo port in Colombo. FILE/AFP.

New Delhi: Sri Lanka has agreed to use Indian rupee (INR) for international trade. It comes days after the Government of India said it is looking at ways to bring countries that are particularly short of dollars into the ambit of Indian rupee trade settlement mechanism.

Also, the neighbouring island nation has requested RBI to facilitate and promote trade as well as tourism in the SAARC region.

How will it benefit Sri Lanka?

Severe economic crisis and dollar crunch have been weighing on Sri Lanka for almost a year. Designating the Indian rupee as a legal currency will provide the island nation with much-needed liquidity support.

Also, Sri Lankans and Indians can use Indian rupees instead of US dollars for international transactions between each other.

Notably, since July this year, the Indian government has been looking to bring countries that are short of dollars, into its rupee settlement mechanism.

The Indian rupee trade settlement mechanism is a means of using the Indian rupee in all international transactions instead of dollars and other big currencies.

The RBI, on 11 July, announced the setting up of a mechanism to carry out international trade in Indian rupees.

The mechanism will enable all exports and imports to be denominated and invoiced in the Indian currency, while the exchange rate between the trading partners is settled by the market.

The Finance Ministry of India has also asked the Indian Banks’ Association (IBA) and the FIEO to initiate an awareness campaign to sensitise stakeholders about the rupee trade.

Importers in India undertaking imports through the mechanism will be required to make payment in rupees which must be credited into the Vostro account of the correspondent bank of the partner country, against the invoices for the supply of goods or services from the overseas seller or supplier.

In a similar way, exporters of India exporting goods and services through this mechanism must be paid the export proceeds in the Indian currency from the balance in a designated Vostro account of the correspondent bank of the partner country.

Russia to trade in Indian rupee

Russia is also expected to be one the first countries to use the Indian rupee trade settlement mechanism.

Notably, rupee becoming an international currency would possibly reduce India’s trade deficit and will help strengthen it in the global market.