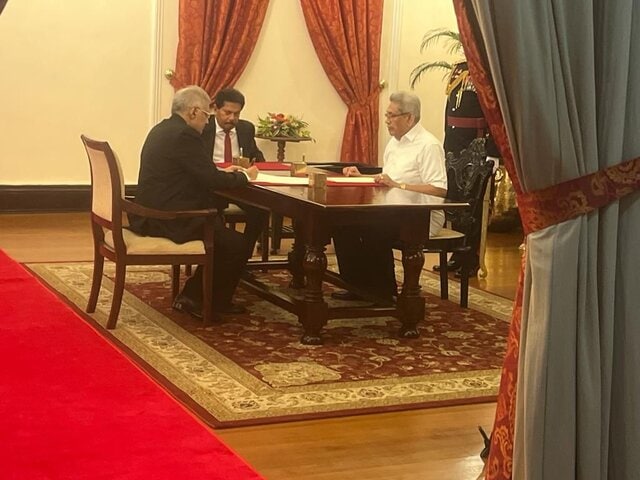 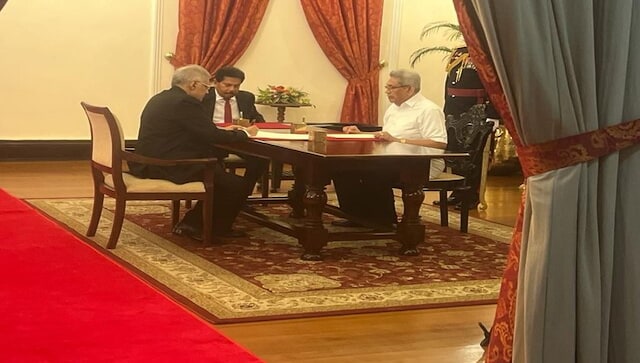 Ranil Wickremesinghe (L) was sworn in as Sri Lanka’s PM by President Gotabaya Rajapaksa (R) on 12 May, 2022. Twitter/@Dailymirror_SL

Ranil Wickremesinghe who was sworn in as Sri Lanka’s prime minister for the sixth time on Thursday, has made the country’s economic recovery a priority.

The veteran politician said, “I have taken on the challenge and I must fulfill it.”

Wickremesinghe added that he is open to talks with anti-government protesters.

When asked about ties with neighbouring India, he said that they will “become much better” during his tenure.

The 73-year-old’s political career appeared to be drawing to a close before this week, when he agreed to helm a unity administration and help steer the South Asian island nation through a crippling economic crisis. He has never completed a full term as the PM in the office. The appointment comes after Wickremesinghe held talks with President Gotabaya Rajapaksa. One of the first reactions to his appointment came from his predecessor Mahinda Rajapaksa who took to Twitter to wish Wickremesinghe “the best as he navigates through these troubles times.”

Congratulations to the newly appointed Prime Minister of #lka, @RW_UNP. I wish you all the best as you navigate these troubled times. — Mahinda Rajapaksa (@PresRajapaksa) May 12, 2022

Mahinda resigned as the PM on Monday after his supporters attacked anti-government protesters. However, the decision failed to quell public anger.

Wickremesinghe is the sole parliamentary representative of the United National Party, a once-powerful political force that was nearly wiped out in Sri Lanka’s last elections.

The former lawyer hails from a political family and his uncle Junius Jayewardene served as president for more than a decade.

But Wickremesinghe once told AFP he would have likely pursued a career as a journalist, had the government of the day not nationalised his family’s newspaper business in 1973.

He was first appointed premier in 1993 after the assassination of then-president Ranasinghe Premadasa, who was killed in a bomb attack by Tamil Tiger guerrillas during Sri Lanka’s decades-long civil war.

Underscoring the dynastic nature of Sri Lanka’s politics, Premadasa’s son Sajith is the current opposition leader and had also been touted as a possible prime ministerial candidate this week.
Wickremesinghe’s first term in office lasted little more than a year.

He returned to power in 2001, earning a reputation for sound economic management after steering the country out of recession.

Conflict with the president saw him sacked before his term was over, and he spent the next decade in the political wilderness.

Veteran leader with a poor track record in elections

Wickremasinghe lost two presidential contests and led his party to a string of election defeats, prompting even his own supporters to dub him a “record loser”.

He was nonetheless sworn in as prime minister again in 2015 after the election defeat of president Mahinda Rajapaksa after the Opposition rallied behind him as a unity candidate against the authoritarian leader.

His “Mr Clean” image was muddied later that year when his administration was rocked by an insider trading scam involving central bank bonds.

A key accused in the multi-million dollar scam was the central bank chief at the time, Arjuna Mahendran, who was Wickremesinghe’s schoolmate and choice for the job.

He was accused of cronyism during his tenure and failing to prosecute members of the previous Rajapaksa regime, members of which had been accused of graft, kickbacks and siphoning off public finances.

Political conflict with the powerful Rajapaksa family also threw the country into crisis in 2018, with Mahinda taking over the premiership for six weeks before the Supreme Court ruled it was unconstitutional.

He will serve at the pleasure of President Gotabaya Rajapaksa, Mahinda’s younger brother, who has fought off calls for his own resignation over the government’s mismanagement of the economic crisis.

Wickremesinghe has taken charge of a bankrupt nation in default of its $51-billion foreign debt and without money to import essential goods.

His status as a pro-West, free-market reformist could smooth bailout negotiations with the International Monetary Fund and foreign creditors.

But he has already warned there will be no quick fix to the nation’s unprecedented economic woes.
“The worst is yet to come. We have very high inflation now and hyperinflation is on its way,” Wickremesinghe told parliament last week.

“We should start addressing the issues now, we can’t put it off any longer,” he added.

With inputs from AFP, ANI