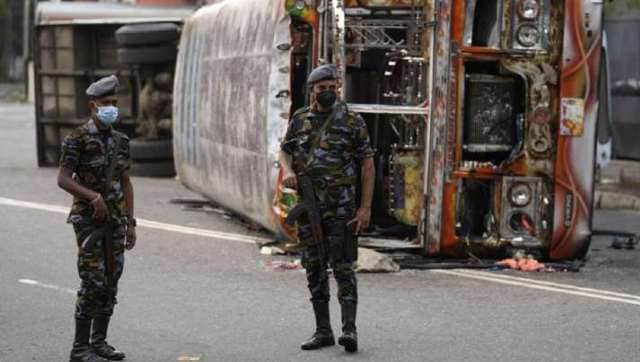 Soldiers stood behind wrought-iron barricades and next to burnt-out buses in the heart of Sri Lanka’s capital Colombo Wednesday, guarding almost deserted streets after a convulsion of deadly clashes Sri Lanka’s economy will “collapse beyond redemption” unless a new government is appointed within two days to restore political stability, the central bank chief said Wednesday.

“If there is no government in the next two days, the economy will completely collapse and no one will be able to save it,” Central Bank of Sri Lanka Governor Nandalal Weerasinghe told reporters in Colombo.

Soldiers stood behind wrought-iron barricades and next to burnt-out buses in the heart of Sri Lanka’s capital Colombo Wednesday, guarding almost deserted streets after a convulsion of deadly clashes.

The occasional car ambled past long rows of shuttered shops before being halted by troops, who cast wary eyes over its occupants as they enforce a nationwide curfew imposed to stop mob violence.

Weeks of overwhelmingly peaceful demonstrations against Sri Lanka’s crippling economic crisis boiled over on Monday, with at least nine people killed and furious mobs torching the homes of government lawmakers.

Security forces have been instructed to shoot on sight anyone engaged in arson or committing further violence after struggling to curb unrest over the past two days.

“The situation is getting better and we are hopeful of lifting the curfew by tomorrow morning,” Kamal Gunaratne, the country’s defence chief, told reporters on Wednesday.

Small groups of young men were still seen roaming Colombo’s streets late on Tuesday after the defence ministry announcement, defying the stay-home order that had already been in effect for 24 hours.

Further north, a crowd had formed an unofficial checkpoint on the highway leading to Sri Lanka’s main airport, stopping cars to check for government figures after rumours they would try to flee the country.

The blockade had been dispersed by morning while armoured personnel carriers had brought thousands of troops into the capital, to the consternation of many of its residents.

“This regime… has a problematic history with using a military presence to silence the people,” Jessica Fernando, who has participated in anti-government protests, told AFP.

“I don’t think this is the way to calm people.”

Despite the relative quiet, the streets were still littered with reminders of Monday’s spasm of disorder.

Around the city centre were the charred remains of at least a dozen buses set alight by enraged crowds, some overturned and others pushed into a lake.

The vehicles had brought in mobs of government loyalists from the countryside who set upon demonstrators with sticks and clubs.

Hours later, the incident prompted the resignation of Prime Minister Mahinda Rajapaksa, who protesters blamed for instigating the attacks.

Rajapaksa, head of a family that has dominated Sri Lanka’s politics for much of the past two decades, later had to be rescued from his Colombo residence by soldiers after it was besieged by an angry crowd.

The former leader is now being guarded at a naval base on the other side of the country after rumours he was preparing to flee Sri Lanka were denied by his son.

Reprisals carried on elsewhere late into the night and through the next day, with mobs setting alight dozens of homes belonging to ruling-party politicians around the country.

‘They wanted to create problems’

Nearly all of Colombo’s residents had kept to their homes on Wednesday as the government stepped up efforts to restore order.

But troops have so far not enforced the curfew at a protest camp by the capital’s seafront, where a crowd has been gathered for the past month to demand the government quit over its mismanagement of the economic crisis.

The site faces the office of President Gotabaya Rajapaksa — Mahinda’s younger brother — and it was there that the club-wielding pro-government mobs sparked the unrest that soon engulfed the island nation.

“They wanted to create problems for a peaceful protest, that’s why they came and hit everyone,” Mohandas Aravindh, a participant in the protest camp, told AFP.

Aravindh said that people still supported the camp’s efforts to compel the government’s resignation and the curfew had not deterred its inhabitants.

“We don’t want a single person from the Rajapaksa family to be in Sri Lanka,” he said.

Explained: How Putin’s formal annexation of 15% of Ukraine will change the war

News Next Desk - September 30, 2022 0
Senior Congress leader and Kerala MP Shashi Tharoor on Friday filed his nomination for the Congress president's post at AICC's officie in Delhi, news...
%d bloggers like this: