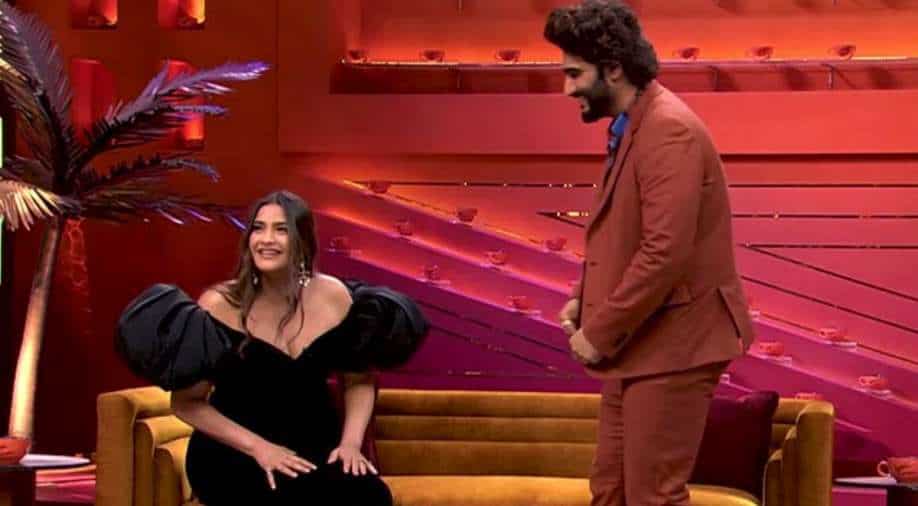 In the upcoming episode of ‘Koffee with Karan season 7’, Sonam Kapoor Ahuja will be seen gracing KJo’s fancy couch with her cousin and actor Arjun Kapoor. The two will be seen talking about their love lives, film fraternity and a lot more on the popular celebrity chat show. The makers have released a teaser of the 6th episode of the show and it is currently going viral across social media platforms.

The short clip shows heavily pregnant Sonam dressed in a gorgeous black dress while Arjun is seen wearing a tan jacket. At one point, Sonam is seen saying that her brothers have slept with all of her friends. To which, Arjun replied, “What kind of sister are you? What are you saying about us?” He also added that he feels like Sonam is trolling her on the show.

Another moment from the teaser that caught everyone’s attention was when the actress seemingly couldn’t recall the name of Ranbir’s upcoming film ‘Brahmastra’. She described it as ‘Ayan’s film’ and called it “Shiva number 1”.

Watch the teaser of Koffee with Karan season 7 episode 6 below:

In the coming episodes, you will reportedly see Katrina Kaif, Siddhant Chaturvedi, Ishaan Khatter, Vicky Kaushal, Sidharth Malhotra, and Gauri Khan having a candid chat with the 50-year-old Bollywood director-producer.