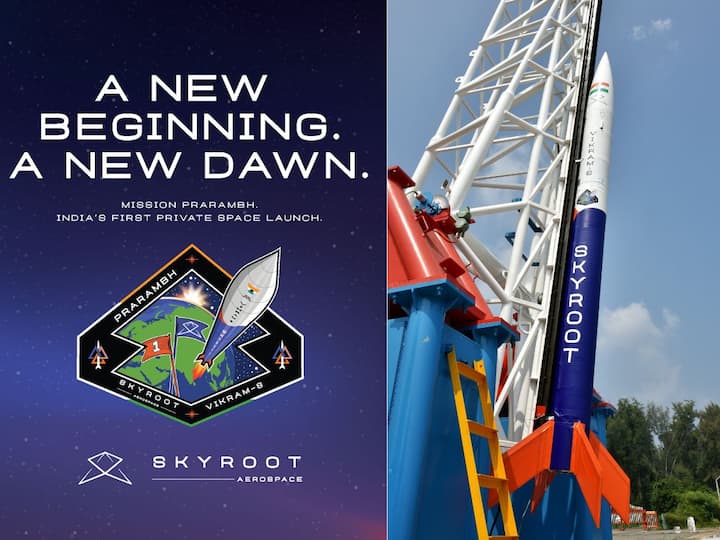 Hyderabad-based India space-tech startup Skyroot Aerospace will launch India’s first privately developed launch vehicle on November 18, as part of the firm’s maiden mission, Prarambh. Skyroot Aerospace wrote on Twitter that the firm received authorisation from INSPACe (Indian National Space Promotion and Authorisation Centre) after final checks on readiness and weather were completed. The firm will launch its rocket, Vikram-S, as part of the mission.

All about Prarambh mission and Vikram-S

Vikram-S will carry three customer payloads and launch from the Indian Space Research Organisation’s (ISRO’s) launchpad at Sriharikota. Vikram-S will take off into space at 11:30 am IST on November 18.  Prarambh, which means ‘beginning’, is a first for the Indian private space sector.

With the big day looming large, here it is! Catch a glimpse of Vikram-S rocket integrated to the launcher. You can watch the action unfolding live on our YouTube link https://t.co/p2DOuRFiIA. #Prarambh #OpeningSpaceForAll pic.twitter.com/kjmkHZuV8c

The slogan for Prarambh is ‘A New Beginning. A New Dawn’. The Chairman of ISRO, S Somanath, unveiled the mission patch for Prarambh.

Vikram-S was developed in a record time of two years, and will be powered by solid fuels. It has cutting-edge avionics and all-carbon fibre core structures.

According to Skyroot Aerospace, the mission will help test and validate the majority of the technologies in the Vikram series of orbital-class space launch vehicles. The mission will also ensure that many sub-systems and technologies are tested across the pre-lift and post-lift stages.

Vikram-S has a mass of 545 kilograms, a length of six metres, a diameter of 0.375 metres, a peak vacuum thrust of seven tonnes, and can carry payloads weighing up to 83 kilograms to a maximum altitude of 100 kilometres.

If Prarambh is successful, Skyroot Aerospace will become the first private space company in India to launch a rocket into space. This will mark the beginning of a new era for the India space sector, which was opened up for commercialisation in 2020.

Skyroot Aerospace has named its series launch vehicles ‘Vikram’ as a tribute to Vikram Sarabhai, the father of the Indian Space Programme and founder of ISRO.

Skyroot Aerospace aims to advance its mission to make space flights affordable, reliable and regular for all.

Qala, Freddy, Moving In With Malaika: OTT films and series to watch in December

News Next Desk - December 3, 2022 0
The 2022 World Cup knockout stage is here, and it starts with the United States men's national team seeking to beat...

News Next Desk - December 3, 2022 0
Salman Khan has wrapped his upcoming film 'Kisi Ka Bhai Kisi Ki Jaan'. On Friday, Khan shared that he has wrapped the filming of...

News Next Desk - December 3, 2022 0
Two foreign nationals were found with cocaine worth Rs 18 crore by the Directorate of Revenue Intelligence (DRI) on Saturday at the Chhatrapati Shivaji...

News Next Desk - December 3, 2022 0
Barnet cemented their position in the National League play-off places after a 2-0 win over Wealdstone.Harry Pritchard and Nicke Kabamba were on target as...

News Next Desk - December 3, 2022 0
MUMBAI: Actor Ayushmann Khurrana and Jaideep Ahlawat-starrer 'An Action Hero', which was released on Friday (December 3) has witnessed a slow start. As per...

News Next Desk - December 3, 2022 0
Canada, in a major move, announced that the work permit eligibility will be expanded to the Open Work Permit (OWP) holders' family members from...
%d bloggers like this: