Home Entertainment Shehnaaz Gill gets scared as she sees lion cub in a room,... 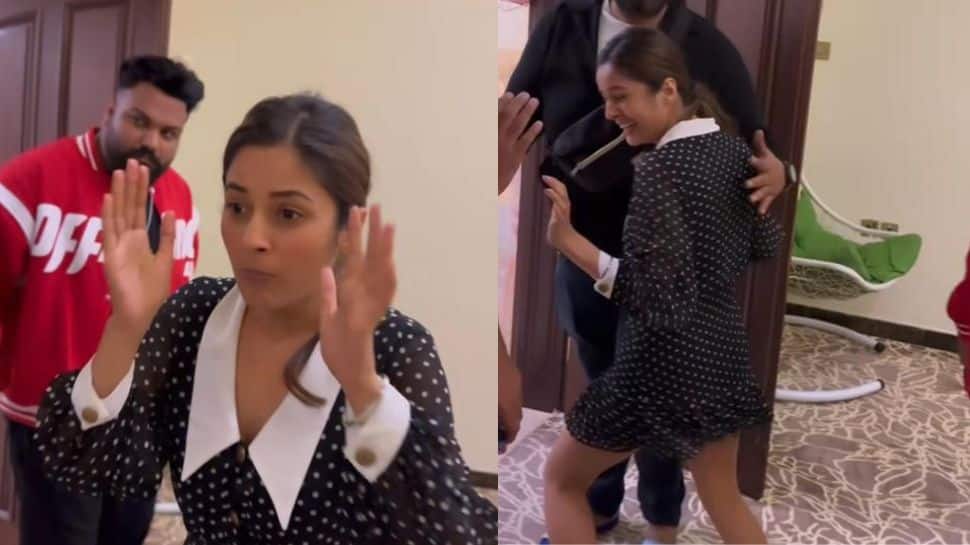 New Delhi: Shehnaaz Gill is an actress who never fails to amaze her fans, no matter what! Recently, the actress was in Dubai for the Filmfare Middle east Achievers Night and she encountered an unusual situation there. Shehnaaz shared a video on her Instagram handle and showed how she came across a lion’s cub there.

In the video, a lion’s cub can be seen roaming in the room and Shehnaaz gets shocked and scared to see him. However, there are lots of people in the room who are taking care of the cub. First we see that a scared Shehnaaz runs outside the room as she spots the cub. A few moments later, she comes back and screams ‘Waheguru’ (sikh term meaning God) as the cub is still there. In the caption of the video, Shehnaaz wrote, “main dar gayi” (I got scared).

Fans of the actress could not keep their calm seeing the hilarious video and started sharing their responses in the comments section. “Are aap to khud humari sherni ho isse mat daro,” a fan commented with smileys and heart emojis. “Waheguru sachhe badshah,” added another user.

Shehnaaz came into limelight during Bigg Boss 13 when she and Sidharth Shukla made headlines for their cute bonding and relationship. The couple were popularly known as ‘SidNaaz’. Sidharth, however, passed away on September 2, 2021, after suffering a cardiac arrest. He was 40. Recently, at the Filmfare Middle east Achievers Night, Shehnaaz received an award which she dedicated to her close friend Sidharth Shukla.

News Next Desk - December 7, 2022 0
Mumbai: One of the most popular digital series `Aarya` is coming back with another season! The show has Sushmita Sen in the lead and...

News Next Desk - December 7, 2022 0
India’s love of jewellery, both gold and precious stones is well known and dates back to the times of Maharajas waging war on the...

News Next Desk - December 7, 2022 0
One of the most beloved and popular digital series, 'Aarya' is coming back with a season 3. Actor Sikandar Kher was all smiles as...

News Next Desk - December 7, 2022 0
Oil futures were little changed in Asia on Wednesday as hopes of improved Chinese demand offset uncertainty about how a Western cap on Russian...

News Next Desk - December 7, 2022 0
New Delhi: Most candidates hailing from political families emerged victorious in the Delhi civic polls, while the richest contender faced a drubbing. Three women former...
%d bloggers like this: