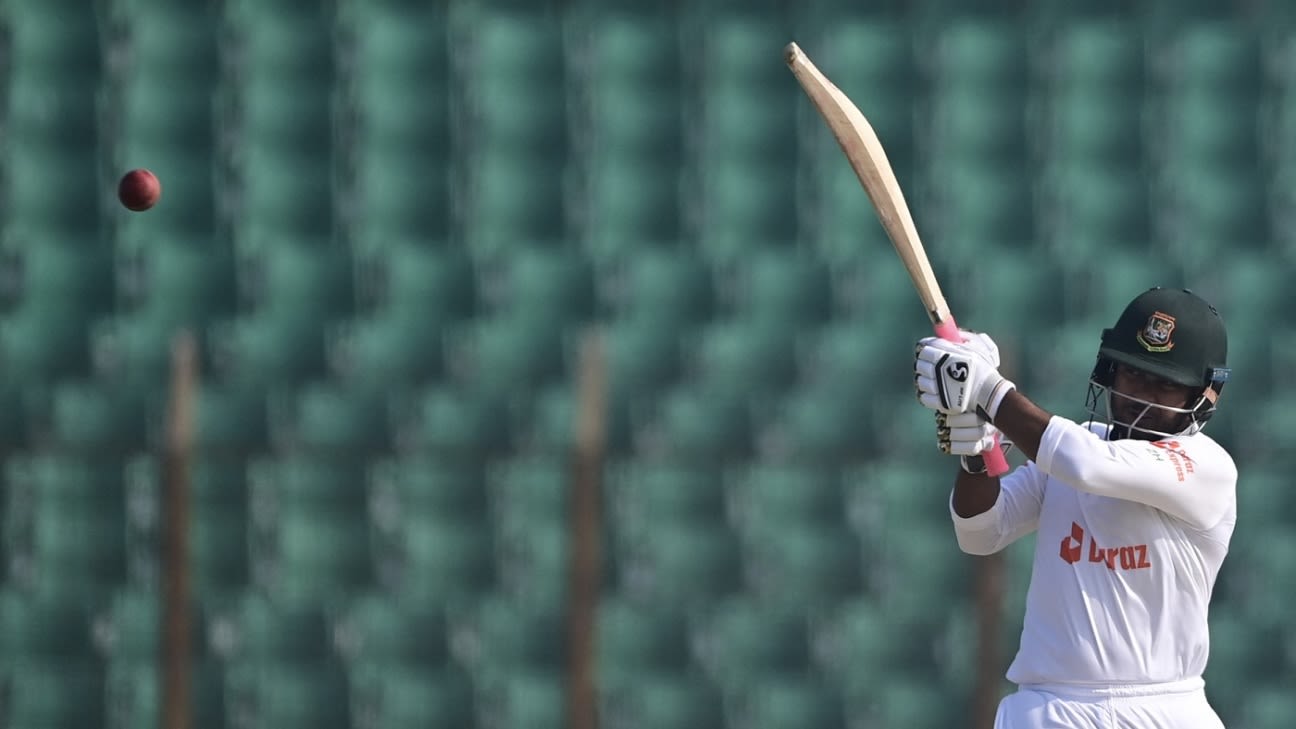 Najmul Hossain Shanto and Zakir Hasan, the debutant, dug in to post Bangladesh’s first century opening stand in Tests against India, who looked out of ideas as the two openers defied them on a pitch that seemed to have eased out a fair bit on the fourth morning. Shanto made up for two first-ball ducks and a 21 across three innings against India on this tour, while Zakir got to his first Test fifty after missing out on a big score despite looking set in the first innings.

Starting on an overnight score of 42, Shanto and Zakir added another 77 in the first session without any trouble, even as India mixed things up with pace and spin, while also switching plans often.

KL Rahul tried three different bowlers in as many overs to start the day, before settling on R Ashwin and Mohammed Siraj to operate. But the runs started coming from the fourth over of the day itself, as Shanto drove and flicked Siraj for back-to-back boundaries. That brought up the fifty partnership, with a play-and-miss or an edge dropping short of a close-in fielder only a rare occurrence. Ashwin had started the day from around the wicket, but Shanto and Zakir soon settled into a rhythm to safely block, nudge or paddle sweep him.

Boundaries came quite frequently, too, with Zakir slashing Umesh Yadav, who replaced Siraj seven overs into the day. So firm did Zakir look that he decided to go inside-out against Ashwin when he saw no fielder out on the off-side boundary.

At the other end, Shanto looked stable even against the short ball, which Umesh sent his way with fine leg back and square leg and midwicket close in. By then, Ashwin had been forced to try something different either side of that inside-out shot in the 24th over: first, he pushed silly point a few steps back to invite a drive, and two overs later, switched to an over-the-wicket line. Nothing worked.

Nine overs into a wicketless spell, Rahul took Ashwin off and brought Kuldeep Yadav back, but even that made little difference. Axar Patel was introduced towards the latter part of the session, and might have had an lbw shout against Zakir go his way another day, but it was turned down and India didn’t review – it would have been umpire’s call. Zakir got to his fifty off his 100th delivery, and in the company of Shanto, ensured India had to work hard and hope something clicked.