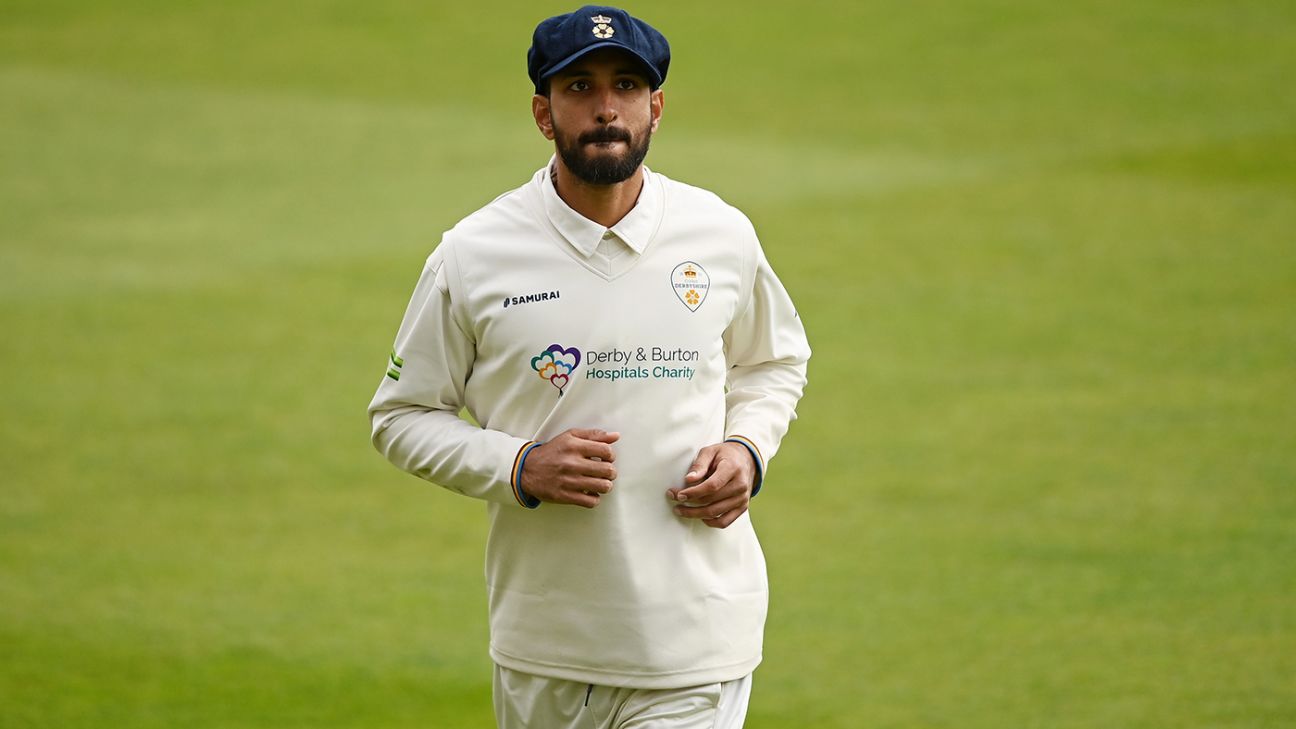 Pakistan international Shan Masood became the first player in Derbyshire history to post back-to-back double centuries as Leicestershire’s bowlers were put to the sword on day two of the LV= Insurance County Championship match at the Uptonsteel County Ground.
The 32-year-old opener was out for 219, having hit 24 fours and a six as Derbyshire racked up 401 runs in the day to lead by 224 with six first-innings wickets still in hand. Wayne Madsen made 94 and Mattie McKiernan is 63 not out.

Masood’s magnificent innings followed his 239 in last week’s drawn match against Sussex, giving him an aggregate of 608 runs from his first four innings for Derbyshire, another county record.

Left-arm spinner Callum Parkinson finally claimed his wicket this time, bowling him with a ball that turned sharply from outside the left-hander’s off stump. Masood turned for the pavilion but could leave the field only after every Leicestershire player, led by Parkinson, had offered a handshake of congratulation on a superb exhibition of high-class batting.

It capped a day that began with Leicestershire’s bowlers hoping for a productive morning with a relatively new ball. Instead, after resuming on 36 for 1, Derbyshire added 111 runs before lunch and lost only one wicket in doing so.

Brooke Guest was the sole casualty, given out leg before to Will Davis for 23. It might have been two but Madsen, having hit the first two balls of Wiaan Mulder’s third over of the morning to the fence, was dropped on the legside by wicketkeeper Harry Swindells on 14 in the same over.

Masood by that point was looking in ominously good touch and as he completed his first fifty just before Madsen’s let-off there was already a sense he had his eye on another big score. Parkinson’s introduction helped stem the flow of runs in the last 40 minutes of the opening session but it was a different story after lunch when the Leicestershire bowlers conceded runs at more than four an over.

Madsen passed fifty and Masood his hundred from consecutive balls off Davis, the latter’s including 12 fours. There was seldom any hint of a breakthrough until Madsen, within sight of what would have been a sixth century against Leicestershire and a third on this ground, decided to chance a single to mid-off off Beuran Hendricks with the odds clearly against him and paid the price, Ed Barnes beating the 38-year-old’s despairing dive with a direct hit.

Understandably, Madsen looked mortified, yet his partnership with Masood had added 221 for the third wicket and put Derbyshire firmly in control. He and Masood shared a partnership of 292 against Sussex last week.

When tea arrived at 295 for 3, their lead was 82. Now Leicestershire were pinning their hopes on the second new ball, which would be available an over into the final session.

But that proved fruitless too as Masood continued to prosper. Most of his boundaries had come from sweetly timed drives or clips off his legs but he showed an aggressive side when he drove Davis for four and pulled him for six in the same over.

McKiernan, though dropped on 39 off Mulder, was striking the ball confidently at the other end and he and Masood added 129 at almost five an over, passing his previous highest score of 52.

Derbyshire supporters are already likening Masood’s impact to that of the Australian Simon Katich, who scored 433 runs in his first four innings for the county in 2007, and Martin Guptill, the New Zealand batter, who was the key figure the last time Derbyshire won promotion from Division Two of the County Championship in 2012.

Although he is not alone in making consecutive double hundreds, no player in the history of cricket has made three in a row.