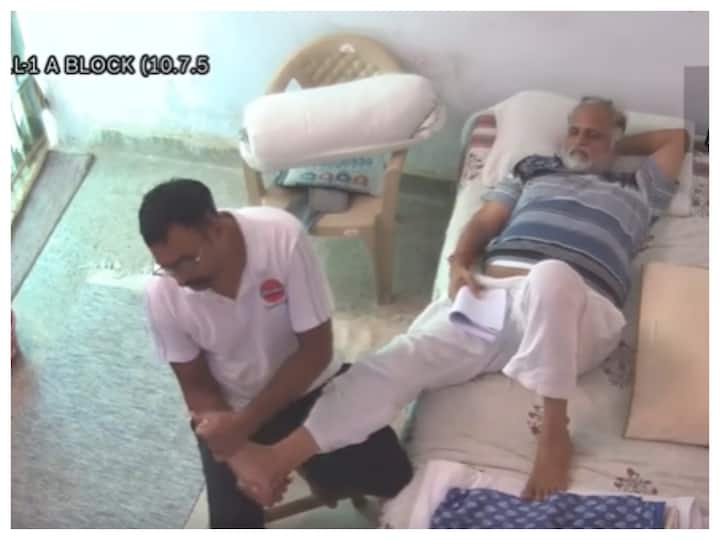 New Delhi: The legal team of jailed Delhi minister Satyendar Jain filed an application in a special court asking for contempt against the Enforcement Directorate (ED), claiming that the agency had leaked the CCTV footage despite their promise made in court.

The ED was given notice by Special Judge Vikas Dhull that the case would be heard on November 21.

Notably, a video clip of Satyendar Jain, showing a man giving him a foot massage while the minister lies on the bed inside a Tihar jail cell, has gone viral on the social media.

The video dated September 13 was recorded by a CCTV camera a little past 1 pm.

The videos first appeared on social media on Saturday, a few days after the ED claimed that the Delhi minister was getting preferential treatment while being held in the Tihar jail.

“Even after curfew had ended, unknown people were giving Mr. Jain massages and foot massages. He received a special diet, “In a court, the ED said.

Lashing out at Delhi Chief Minister Arvind Kejriwal over the CCTV videos, BJP leader Gaurav Bhatia, as quoted by news agency ANI said, “The ‘kattar beimaan’ (absolute dishonest) thug is taking a massage in jail by violating laws. He’s been jailed for 5 months now but has still not been sacked as a minister. The video shows VVIP culture. We’re asking you questions after seeing the video, Arvind Kejriwal where are you hiding?”

It is to be noted that Jain was arrested on May 30 after the ED charged him under the Prevention of Money Laundering Act (PMLA) for alleged money laundering and owning assets disproportionate to his income between February and May 2017.

‘Kisan Our Owners’: Amul Aims To Double Farmers Income In Next 4 Years

I have moved on: Malaika Arora opens up about her life...

News Next Desk - December 4, 2022 0
New Delhi: Bollywood diva Malaika Arora is coming up with her show `Moving in with Malaika`. On Friday, she took to Instagram and dropped a...

News Next Desk - December 4, 2022 0
New Delhi: Actors Triptii Dimri and Irrfan Khan`s son Babil Khan who are basking in the success of their psychological drama `Qala` and are receiving...

News Next Desk - December 4, 2022 0
The United States men's national team made it the World Cup knockout stage despite scoring just two goals in its three...

News Next Desk - December 4, 2022 0
Garena Free Fire MAX redeem codes for today are out and can be below. Latest events and rewards on offer can be known too. Garena...

News Next Desk - December 4, 2022 0
In-form Queensland opener Matt Renshaw says he's ready for an Australian Test recall after making key changes to his approach to cricket.Renshaw, the 26-year-old...
%d bloggers like this: