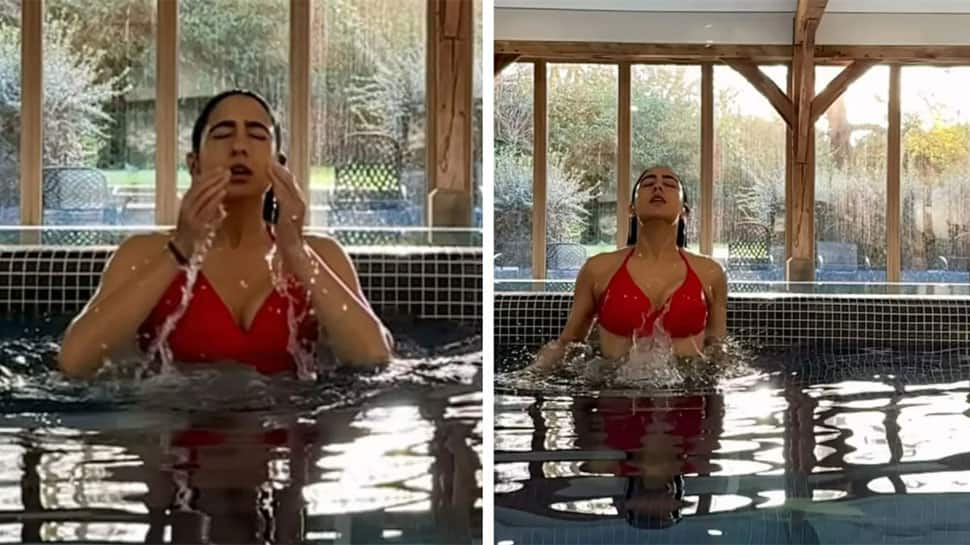 New Delhi: Actress Sara Ali Khan, who has been working non-stop these days, took time off and jetted off to the UK with her mom Amrita Singh. Sara, who is an avid social media user, decided to tease a few pictures and videos on her IG stories. Giving a glimpse of her ‘happy, peaceful and relaxed’ time on the vacay, Sara shared some photos online. The video of her taking a dip into the swimming pool wearing a red hot bikini has gone viral on the internet.

Sara Ali Khan can be seen donning a stunning red bikini set as she enjoys her dip in the pool. Sara also put up shared pictures with her mother Amrita Singh and hair stylist Sanky Evrus. Sara wore a pink gym wear along with a bomber jacket in same colour, veteran actress and mommy to the star daughter, Amrita can be seen in casuals paired with a long black winter jacket.

The actress is stationed in the UK for her film ‘Mission Eagle’ next to Tiger Shroff. She jetted off to the UK in just two days after wrapping Ae Watan Mere Wata. Apart from that, Sara will be next seen in ‘Gaslight’ opposite Vikrant Massey, Maddock’s next opposite Vicky Kaushal and other projects which are yet to be announced.