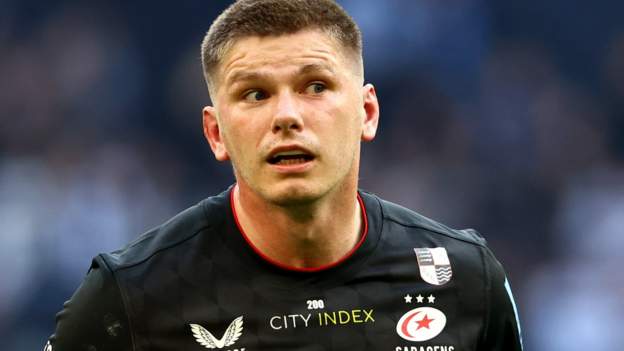 England captain Owen Farrell is out of Saracens’ Premiership match at Sale due to concussion protocols.

Farrell went off for a head injury assessment in Saturday’s win against Bristol, his first game since November.

He passed the HIA, but return to play protocols mean he is not included in second-placed Sarries’ squad.

England team-mate Manu Tuilagi returns to the Sharks bench after recovering from a hamstring injury sustained on international duty.

Both teams have changed their entire starting XVs from their Premiership Rugby Cup matches on Tuesday.

Sale beat Harlequins 34-29 despite already having been eliminated and Saracens’ exit at the pool stage was also confirmed in a 40-21 defeat to Wasps.

Jono Ross captains the side and Daniel du Preez is in at number eight.

Arron Reed and Tom Roebuck start on the wings with Luke James at full-back.

Eron Mawi and Vincent Koch start as props for Saracens either side of Jamie George at hooker, who is named captain in Farrell’s absence.

Nick Isiekwe and Tim Swinson make up the second row, with Maro Itoje, Ben Earl and Billy Vunipola at the rear of the pack.

Aled Davies is in at scrum-half alongside Alex Goode, with Nick Tompkins and Alex Lozowski at centre.

Alex Mallins and Sean Maitland are on the wings for Sarries, with Elliot Daly at full-back.