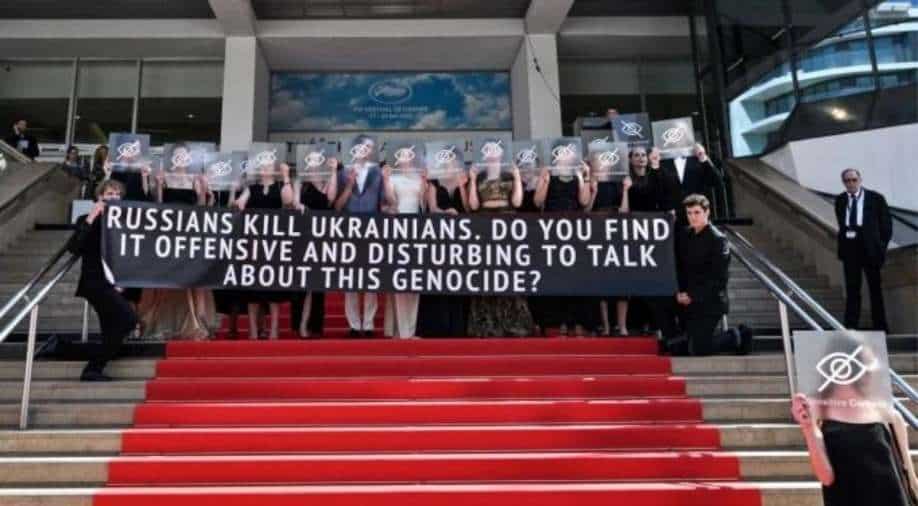 This year, we witnessed a slew of protests at the Cannes Film Festival. On Wednesday, before the screening of their film ‘Butterly Vision,’ Ukrainian director Maksym Nakonechni along with the whole crew of his movie gave a reminder about the crisis Ukraine is going through after the Russian invasion.

In front of the Salle Debussy, which is the second-largest theatre in Cannes, the silent protest was held at the stairs of the theatre where the whole team of the movie including director Maksym, producers Darya Bassel and Yelizaveta Smit, lead actress Rita Burkovska with the other members.

Protesting against the genocide, they showed up the banner, reading, ”Russians kill Ukrainians. Do you find it offensive or disturbing to talk about this genocide?”

The protestors also covered their face with a translucent sheet reading ”sensitive content” with the same eye logo we see on social media platforms when content is disturbing.

As per Variety, ”the protestors were demonstrating against what they see as a dangerous form of censorship by social media platforms, which, in their opinion, are hiding the uncomfortable and disturbing reality of the war.”

The movie is about a female Ukrainian soldier Lilia, who returns home to her family after spending months in prison. The movie’s official synopsis reads via Variety, “The trauma of captivity continues to torment her and surface in dreamlike ways. Something growing deep within Lilia will not allow her to forget, yet she refuses to identify as a victim and will fight to liberate herself.”

This protest comes a few days after a group of woman protestors used the event to raise awareness against male violence. A group of women wearing black clothes walked the red carpet with a white banner featuring the victims of domestic violence in France. The protestors were also holding smoke grenades.

Last week, an unidentified woman protested against the sexual violence in Ukraine amid the Russian invasion. It happened during the premiere of George Miller’s ‘Three Thousand Years of Longing’.

A visit to the Secret Lagoon in Iceland’s Golden

News Next Desk - October 6, 2022 0
The entrance to Iceland‘s Secret Lagoon is perhaps not the most inspiring – a car park followed by a long gravel approach – but...

News Next Desk - October 6, 2022 0
Quordle 255 answer for October 6: Today’s puzzle comes with a word that takes repeated letters to a different level. If you feel confused,...

News Next Desk - October 6, 2022 0
New Delhi: Flash floods during idol immersion in Mal river in West Bengal's Jalpaiguri district claimed the lives of at least eight people while...
%d bloggers like this: