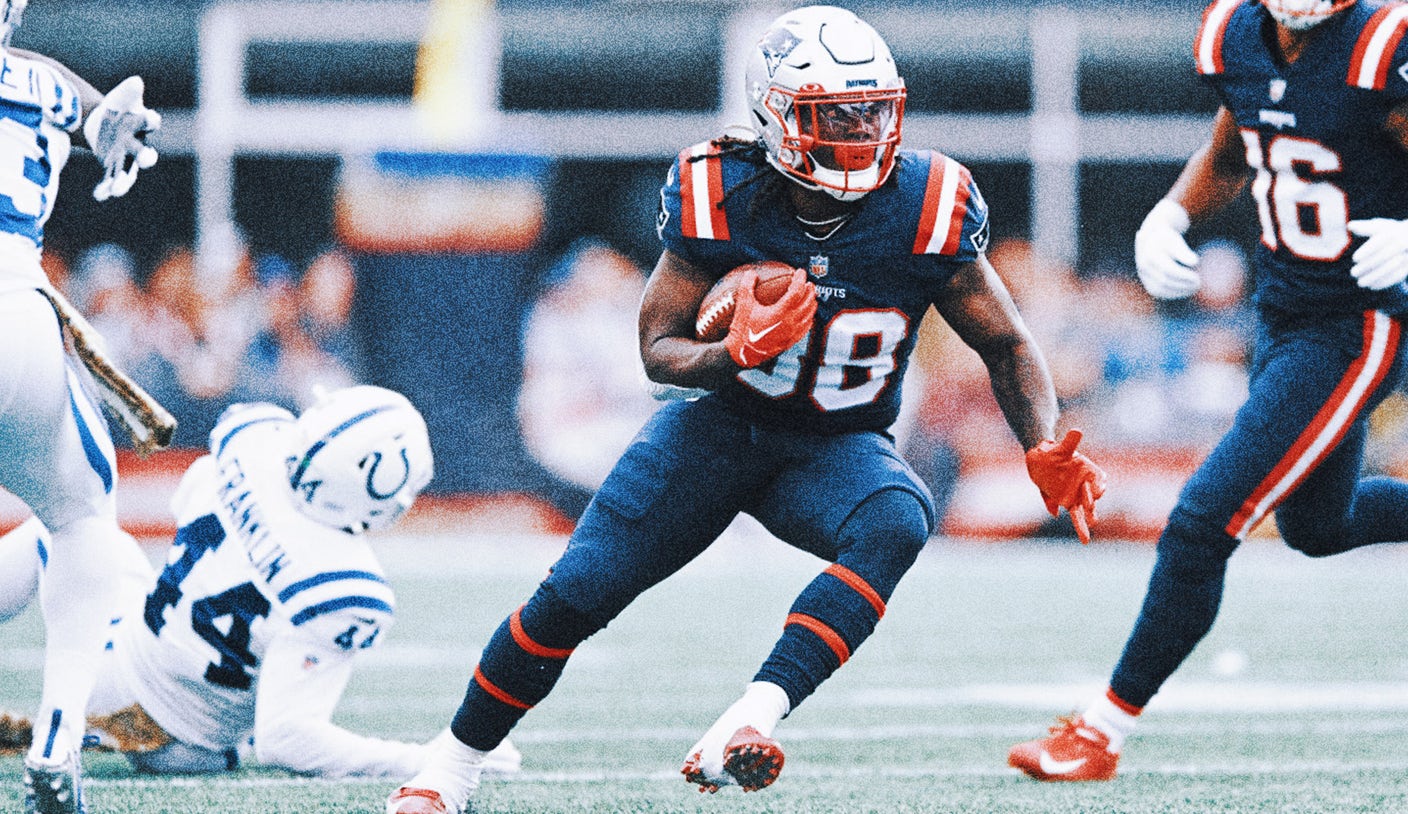 But right now, he’s more than that to Bill Belichick. Stevenson is a part of Belichick’s much bigger vision.

Aside from Titans star Derrick Henry, there aren’t many RBs who weigh in above 230. Stevenson is Belichick’s power runner; he bruises defenses and seeks out contact to wear them down. That has been an actual point of strategy for Belichick for years: He asks his biggest runners to inflict pain with hopes of winning a war of wills by the all-important fourth quarter.

Stevenson can help there — but he also catches the ball out of the backfield. He’s versatile.

“He’s a good all-around back. Love him. Love him,” Belichick said earlier this month.

It’s a passing league. We all know this, right?

Except that it isn’t. Not right now.

According to ESPN, league-wide:

Maybe everyone is still treating the NFL like a passing league. But it’s not.

That’s what makes Stevenson so important to New England. And Belichick can wax poetic about the running back, who is entering his second year after the Patriots drafted him in the fourth round out of Oklahoma.

“He’s one of the guys that I’ve coached that really has shown just continuous improvement almost every day he walks into the building. Just in every phase of the game,” Belichick said. “This kid’s really come a long way in just every part of his game. You mentioned some of the things in the passing game: awareness, route running, blitz pickup, recognition, getting out on fake blitzes versus reading the difference between fake blitzes and blitzes. In the running game: his patience and setting up blocks, running on the second level, stiff arm and contact balance, ball security. You name it.

“I have a ton of respect for the way he’s worked at his game, improved his training habits. He’s still got a ways to go. But he just gets better at all the things he works at every day. He’s got a long list of them. But he’s made significant progress in so many areas. He’s really been impressive.”

Now, to be clear, Stevenson isn’t one of a kind — even if Belichick’s praise would make you think that the young running back is the second coming of Barry Sanders.

Henry, Saquon Barkley, Leonard Fournette, James Conner and Najee Harris — they’re all oversized backs at about 230 pounds. And that’s compared to guys who hover over 200 pounds: Austin Ekeler, Christian McCaffrey and Aaron Jones. Dalvin Cook is 210, and Alvin Kamara and Javonte Williams are 215.

There are two exceptions: Fournette and — who else? — Stevenson.

They are both in the top six among running backs in terms of catches. Not only can Stevenson pound between the tackles, with 129 carries for 618 yards and four touchdowns, but he can also rack up catches, with 35 receptions for 227 yards and one touchdown.

His stats may not wow. It is clear that the Patriots didn’t initially plan to make Stevenson their every-down back — and that has depressed his production so far. They seemed to want to split carries between Stevenson, Damien Harris and Ty Montgomery, their pass-catching option who landed on season-ending IR. Since Harris suffered a hamstring injury in mid-October, Stevenson has taken a bigger load, now playing 66% of snaps on the season.

His ability to run, catch and pass-block efficiently make him the modern NFL running back. But when you add in his size, you can see why he provides such a distinct advantage. Belichick has long planned his personnel additions around league-wide trends. So it’s no surprise that, with the NFL focusing on adding quarterbacks and receivers, The Hoodie seems content with a unique running back and the NFL’s best defense.

This isn’t to say the Patriots have one of the most efficient rushing attacks. They’re actually in the bottom five with 4.1 yards per carry. And New England is right in the middle of the league with 117.2 rushing yards per game. But their issues running seem related to Mac Jones and the passing offense struggling. Stevenson is the highest-graded Patriots offensive player on Pro Football Focus (89.6), and he is the ninth-highest-graded back in the NFL. He is generating 3.79 yards after contact, which is sixth-best in the NFL among RBs with 40-plus carries. He’s also ninth-best in the league among running backs with 1.34 yards per route run.

In a bad offense, Stevenson is a gem. And Belichick’s recent praise indicates the coach knows how important the running back is to his team. And you have to wonder whether Belichick and Stevenson aren’t on the verge of setting a new trend of bigger, versatile backs to attack these undersized defenses.

News Next Desk - November 29, 2022 0
South Korea’s plan to land on the moon and Mars in a few decades propelled shares of the nation’s rocket-related stocks on Tuesday. South Korea's...
%d bloggers like this: