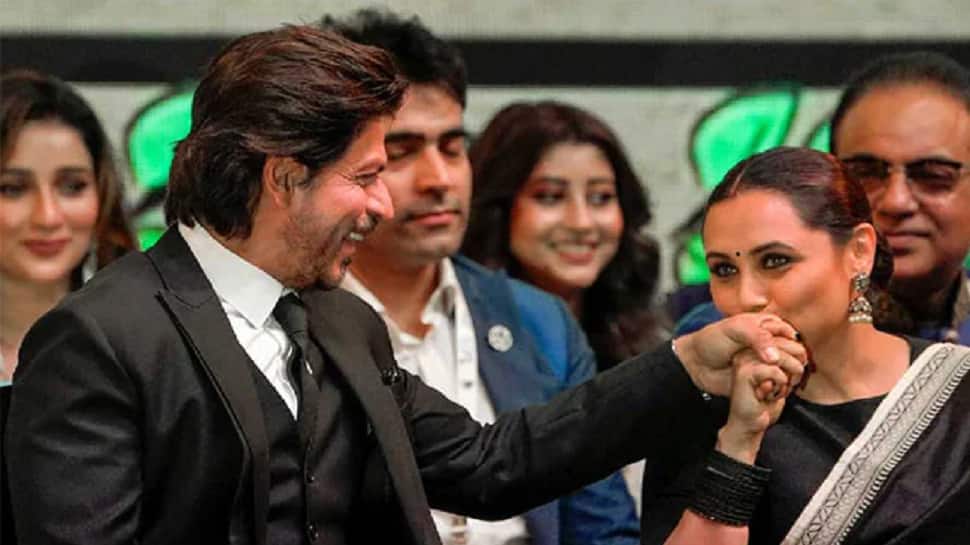 New Delhi: Shah Rukh Khan and Rani Mukerji were among the many stars that attended Kolkata International Film Festival 2022. The duo who never leaves a chance to win hearts with their chemistry amazed the fans with their sweet moments at the event. From SRK`s Bengali speech to Rani planting a kiss on his hand.

The pictures from the event are going viral on social media. One of the pictures was where the duo could be seen sharing a sweet moment on the stage. Rani planted a kiss on King Khan`s hand and he was seen blushing.

Rani and Shah Rukh Khan have worked in several films including `Kabhi Khushi Kabhie Gham`, `Kabhi Alvida Naa Kehna`, `Kuch Kuch Hota Hai`, `Chalte Chalte`, `Paheli` and `Veer-Zaara`.Rani has been honoured at the Kolkata International Film Festival 2022 (KIFF) for her outstanding contribution to the growth and development of Indian cinema.

Another one of the most loved moments of the opening ceremony of KIFF was Shah Rukh greeting megastar Amitabh Bachchan and his wife Jaya Bachchan by touching their feet. SRK also gave a tight hug to Big B.

The 28th Kolkata International Film Festival, which was inaugurated on December 15, will take place till December 22. It is organized by the Information and Cultural Affairs Department, Government of West Bengal. Apart from Rani and SRK, veteran actor Shatrughan Sinha and veteran filmmaker Mahesh Bhatt also marked their presence at the opening ceremony of KIFF.

Meanwhile, SRK will be next seen in director Siddharth Anand`s action thriller film `Pathan` alongside Deepika Padukone and John Abraham. The film is all set to hit the theatres on January 25, 2023.

Apart from that he also has Rajkumar Hirani`s `Dunki` and south director Atlee`s `Jawan`.Rani, on the other hand, will be next seen in `Mrs Chhaterjee vs Norway.`