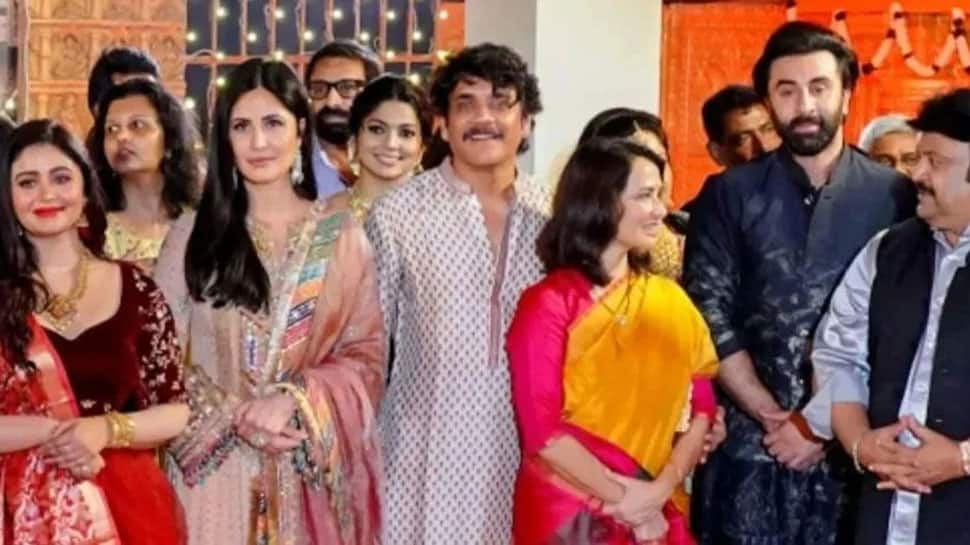 New Delhi: Ranbir Kapoor and Katrina Kaif were recently clicked together under one roof and pictures broke the internet. The duo was present at Kalyanaraman’s grand Navratri celebrations at Kerala and were accompanied by other A-listers including Nagarjuna Akkineni Prithviraj Sukumaran, Prabhu Ganeshan, R Madhavan, Bengali actress Ritabhari Chakraborty among others.

But what caught fans’ attention was Katrina and Ranbir’s presence together at a place, literally after ages. For those unaware, the duo dated for the longest time before calling it quits and moving on in their personal spaces.

Today, Katrina is married to Vicky Kaushal and Ranbir to Alia Bhatt, who held a baby shower bash recently.

The Kalyanaraman family owns the famous Kalyan Jewellers brand and Katrina has been the face of the jewellery for many years. The family annually hosts a grand Navratri puja and this time the star-studded affair saw many celebrities paying their obesience. Ranbir and Katrina Kaif can be seen posing with the Kalyan family and other stars but the duo stood away from each other.

However, fans of the two thronged social media and couldn’t keep calm watching the two in one frame after ages.

Oscars 2023: All categories to be awarded live on air

Oscars 2023: All categories to be awarded live on air

News Next Desk - November 30, 2022 0
In China, the districts of Haizhu, Baiyun, Fanyu, Tianhe, Conghua, Huadu and Liwan saw the end of temporary lockdowns. The district of Conghua also...

News Next Desk - November 30, 2022 0
North Texas will travel a few hours down I-35 South to play UTSA for the Conference USA title game at the...

This cruel email-hacking gang aims to tug on your heartstrings and...

Siddhant Chaturvedi looks dapper in black outfit as he jets off...

News Next Desk - November 30, 2022 0
New Delhi: Bollywood star Siddhant Chaturvedi has created a niche audience for himself in a short span of time. The actor was spotted at...

Chinese spaceship with 3 astronauts aboard docks with Tiangong space station

News Next Desk - November 30, 2022 0
The station has now expanded to its maximum size, with three modules and three spacecraft attached for a total mass of nearly 100 tons. ...
%d bloggers like this: