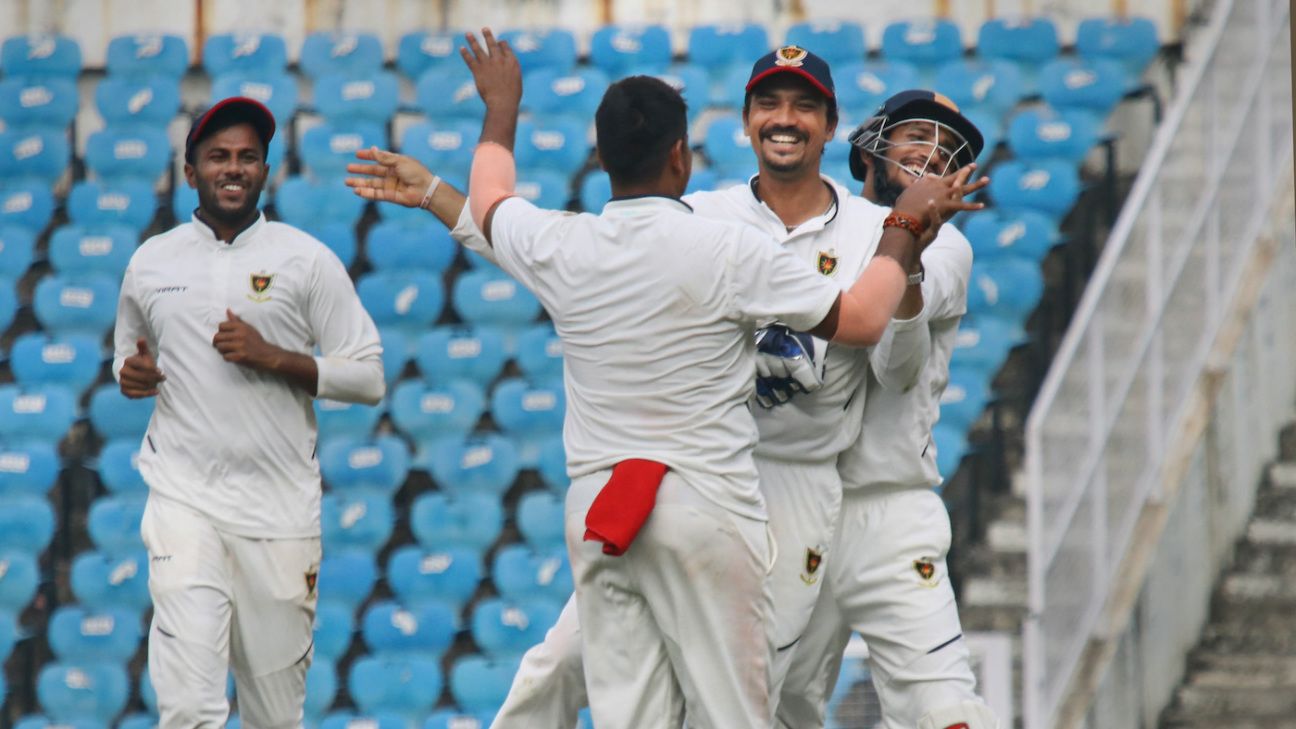 As many as 24 wickets had fallen in a little under four sessions of play in just 103 overs; 20 of those went to the seamers. Punjab, who had taken a 12-run first-innings lead after posting 162, were tottering on 18 for 4 in their second innings when play was halted.

As the first drinks interval neared on Wednesday, on-field umpires K Madanagopal and Rajeev Godara apprised match referee Youraj Singh of the situation, before both captains – Mandeep Singh (Punjab) and Karn Sharma (Railways) – were spoken to. It was eventually decided that the match would start afresh on Thursday on a new surface, adjacent to the one the game had started on. This means the Elite Group D contest has now effectively been reduced to a two-day fixture. A fresh toss will take place with teams permitted to change their XIs.

“They could have repaired the surface and resumed on the third day from where the match was stopped, but the match officials decided to play on a fresh surface,” Railways coach Nikhil Doru told ESPNcricinfo. “We were in a fantastic position but will possibly lose out on a chance to win because of this decision.”

ESPNcricinfo understands that the ground authorities had wanted to prepare a grassy surface, but early-winter chill and heavy dew had hampered preparations in the lead-up to the game.

“The pitch was uneven. Some balls hit the gloves, others scooted low at shoe-height from the same spot. It was a green wicket but the match officials decided it was too uneven and inconsistent for play to continue”

“The pitch was uneven. Some balls hit the gloves, others scooted low at shoe-height from the same spot,” a player told ESPNcricinfo. “It was a green wicket but the match officials decided it was too uneven and inconsistent for play to continue.”

The truncated nature of the contest left both Railways and Punjab with the prospect of going two rounds without an outright result, something that didn’t look like a possibility when play started on Wednesday. Punjab were denied by bad light and had to settle for first-innings honours against Chandigarh in the opening round, while Railways were handed a 194-run loss by Vidarbha despite Karn’s career-best 8 for 38.

Surfaces at the Karnail Singh Stadium have come under the scanner in the past too. In 2011, BCCI’s technical committee had put the venue on a watchlist for producing poor pitches.

In 2012, it was barred from hosting matches for two years, after the committee had found the local curators to have deliberately left the surface underprepared to help Railways try and force outright results in a bid to progress further in the Ranji Trophy. At the time, Railways had temporarily shifted their home base to Bhubaneswar, before their original home venue was reinstated in 2014.