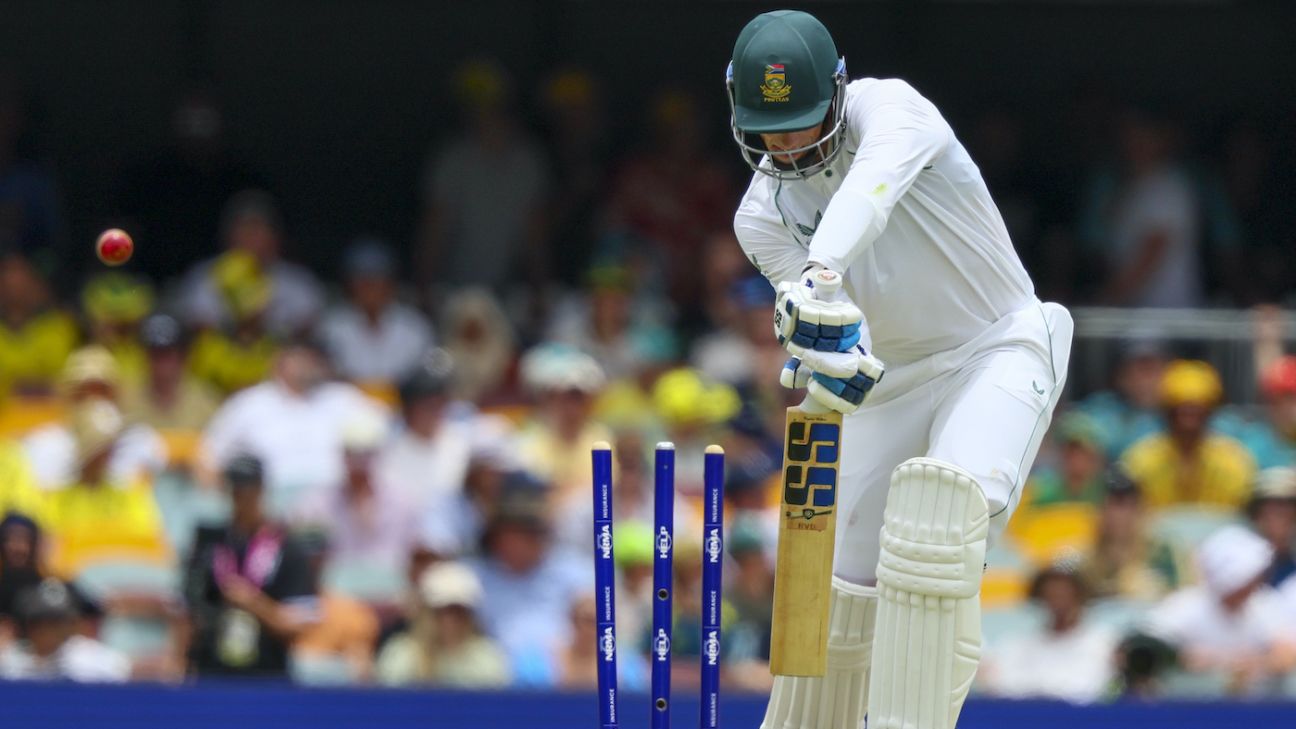 South Africa’s pace spearhead, Kagiso Rabada has called for “patience and understanding,” for their misfiring batting line-up, while also admitting it is “frustrating as a team,” to accept their performances.
Collectively, South Africa’s batters have had their worst Test year in 2022 and have been dismissed for under 200 eight times – the most in their history. Their lean run looks worse when juxtaposed against the excellence of their pace attack – Rabada is the year’s leading Test wicket-taker with 45 scalps in eight matches so far, for example. The gulf between South Africa’s ability in the two disciplines appears to be widening, especially as they routinely find standout speedsters such as the latest recruit Marco Jansen, while no combination of batting has clicked completely yet, but Rabada said it’s only a matter of time before the batters catch up.
“The batting line-up that we have is quite inexperienced,” Rabada said. “In fact, the team that we have is relatively inexperienced if you look at other cricketing nations. Dean Elgar is our most experienced player followed by myself and Temba (Bavuma). I’ve played 50-odd Test matches and everyone else hasn’t played much. It can get frustrating as well and when I say frustrating I don’t mean to single out the batters, it’s frustrating as a team and you almost have to understand that sometimes this is what happens in a rebuilding phase.”
Elgar’s 80 caps are the most in the current South African Test squad, followed by Rabada’s 56 and Bavuma’s 52. The rest of the top six – Sarel Erwee, Rassie van der Dussen, Khaya Zondo and Kyle Verreynne – have just 41 Tests between them which means South Africa’s top six has played 173 Tests in total. All told, the XI that played in Brisbane against Australia, have collectively appeared in 315 Tests. Comparatively, Australia’s most experienced player is Nathan Lyon who has played 113 matches and their longest serving batter is David Warner, who has 99 Test caps. Their Brisbane top-six boasts 313 caps, two fewer than South Africa’s entire XI, so Rabada has a point about the difference in levels of experience, which he emphasised there is just no substitute for.

“It’s all down to belief and I think we have the belief. We will never go down without a fight.”

“I’ve played in a team in a star-studded line-up, where you are literally playing with greats of the game. I don’t think that happens quite frequently,” he said. “Now, the situation that we’re faced with, there’s a whole lot of players who have come in, who have the ability but need to get used to the international circuit. So, there needs to be an element of patience and understanding but at the same time, you can’t advocate for bad performances. However, we’re quite positive.”

Rabada made his debut in 2015, under Hashim Amla‘s captaincy and with AB de Villiers and Faf du Plessis in the batting line-up and Dale Steyn and Vernon Philander in the attack. At the time, Steyn had played 80 Tests and Philander 31 while Morne Morkel, who was also in the squad but missed the match through injury, had 64 caps to his name. That meant Rabada had players who could serve as an example to him taking the field with him, while the current South African batters are mostly learning on the job. And for that reason, Rabada sympathises with their position. “We understand that no one is going out to the centre of the wicket to throw their wicket away,” he said.

While the batters find their feet, Rabada insists the bowlers are happy to pick up the slack, because they know they have what it takes to keep South Africa in contests. “If you don’t have the belief, then I don’t think we’d be able to go out and produce performances like we have,” he said. “It’s all down to belief and I think we have the belief. We will never go down without a fight.”