Home World Proud to say, I have the Indian jab in my arms and... 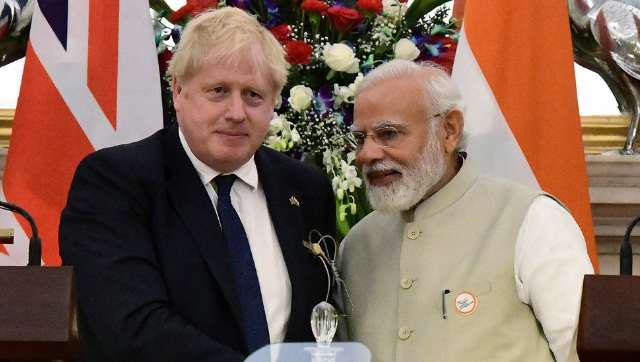 UK PM Boris Johnson, who is on a two-day visit in India, thanks Prime Minister Narendra Modi for a grand welcome in his home-state Gujarat on Thursday Prime Minister of United Kingdom, Boris Johnson Friday said he has received COVID-19 vaccine developed in India by the Serum Institute of India (SII) and AstraZeneca and it did good to him.

Hailing India for being the world’s pharmacy, Johnson, with Prime Minister Narendra Modi by his side during a joint press briefing at Hyderabad House in New Delhi, said, “I am proud to say, I have the Indian jab in my arms and it did me good. Many thanks to India.”

“We are extending our partnership of science, superpowers, and building on collaboration between Oxford AstraZeneca for instance in the Serum Institute of India which vaccinated more than a billion people against COVID. That has helped India to become pharmacy, what PM Narendra Modi has called ‘the pharmacy of the world’,” the UK Prime Minister said.

For the unversed, the Serum Institute has partnered with British-Swedish giant AstraZeneca to develop the vaccine against COVID-19.

In May 2021, India and the UK had pledged to widen their cooperation in health which will help guarantee and equitable supply of vaccine by April 2022. This was discussed during the India-UK summit which was addressed by Prime Minister Narendra Modi and his UK counterpart virtually last year due to the spike in the COVID-19 cases.

On the second day of his two-day visit in India, Boris Johnson on Friday thanked Prime Minister Narendra Modi for a grand welcome in his home-state Gujarat.

“My friend Prime Minister Narendra Modi, I would like to thank him… my khaas dost (special friend). We have had a fantastic two days in India. I became the first conservative prime minister to visit Gujarat, the birthplace of (PM) Narendra (Modi). It is also the ancestral home of almost half the British Indians. I had an amazing reception. I felt like Sachin Tendulkar. My face was in big cutouts like that of Amitabh Bachchan. It was fantastic.”

Earlier on Friday, both the leaders held talks in Delhi where they discussed strategic defence, diplomatic and economic association, aimed at bolstering close partnership and stepping up security cooperation in the Indo-Pacific region.

Prime Minister Narendra Modi also invited the UK to join India’s National Hydrogen Mission. The PM also said he and his British counterpart have decided to work towards concluding the FTA by end of this year.